Something A Little More Complicated - A Sub-Roman Church part 6 (and last!)

A final heavy drybrush with old English white sets up the interior for detailing.

The floor offers opportunities for more or less complexity. Options could include flags, a cement surface, mosaics or a combination of these. I went with a combination! The side aisles went with a cement surface, solid, plain and simple to do. This was dark grey-brown emulsion, (who would buy it to use on their house?!), mixed with some soft sand, followed by a series of drybrushed shades.

The nave and apse can have a bit more flash. Now, some early churches had absolutely breathtaking mosaics (as indeed did many secular Roman buildings). Here, in a small, poor church built at the edge of the Empire close to (or immediately after) the end of the Roman era, I don't think anything that spectacular would be justified. But a little bit would be nice, so I compromised with a flagged floor and a nice bit of mosaic at the altar end, extending into the apse.

I thought about thin card, cut into squares to form the flagstoned areas of the floor, but when I realised it would involve cutting and gluing close to 100 tiles, I lost heart. Inspiration in the form of a sheet of very thin extruded polystyrene saved the day. This was measured, cut and fettled to fit: 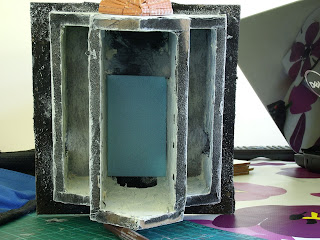 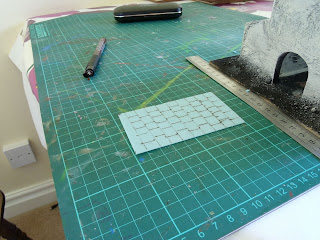 The tiles were embossed with a pencil, and the whole thing got a coat of  PVA to seal it and stop it absorbing paint like a sponge. 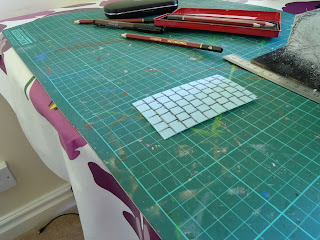 I painted the whole thing black, carefully picked out random stones in shades of brown, and drybrushed with raw umber. 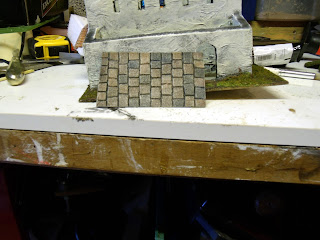 The tiled section is then glued in place. 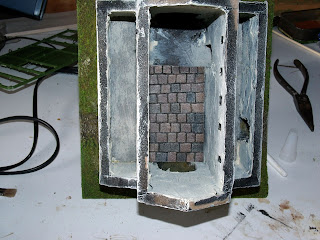 As for the mosaic, I cheated and copied a section of existing mosaic and printed it out to size. After a bit of to-ing and fro-ing it ended up going all the way into the apse (oo-er!), so I had to knock up another flagged section. 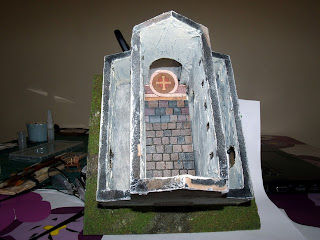 What a gorgeous apse, with that mosaic!

The church gets an altar at one end and a font at the other.

The altar is made from spruce stock. It's a simple wooden table, with a crucifix (made from brass strip and green stuff), a chalice (made from green stuff and a pin as an armature) and an icon (printed and glued to plastic card, frame from spruce). The keen eyed among you will note it's the same icon as is on my Dux Brit warlord Arthur's shield. 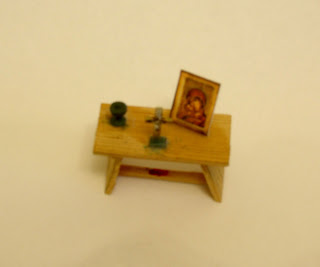 There's a bloke in the village knocks those icons out for three buckets of ale a go!

The table got a wash of burnt umber, mainly to cover the excess superglue, and the items were painted with brassy gold paint and washed with a mix of burnt sienna and sepia inks - whether these are gold, bronze or brass is left to the imagination 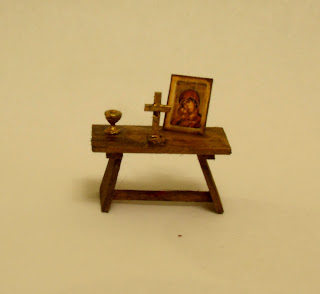 Finished and ready to be added.

The font is a piece of elm stock, with details carved in.
Here's the carving: 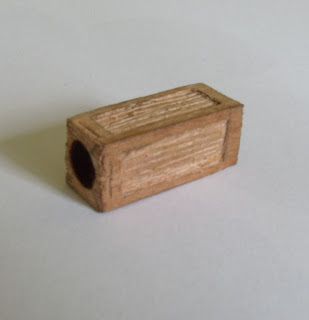 And here it is after a coat of paint, a black wash and a drybrush: 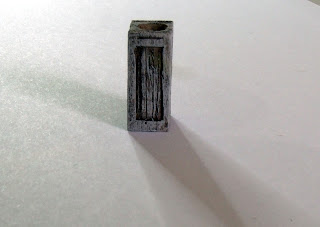 Ready for a baptism - all we need is a baby!

Note there are no pews. Pews are a later feature - by many centuries!

Well, here's the end result. From the outside first, looking across the battlefield. Bedwyr is outside, for scale purposes. 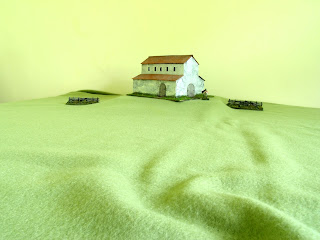 A bit closer this time. I think it works well enough. 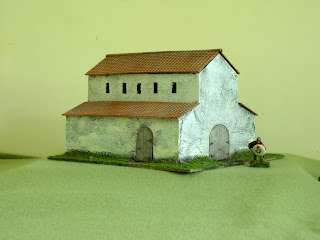 Can't see my apse from this angle!

Having added the interior and details, I'd better show how they look. I'm content with the results. 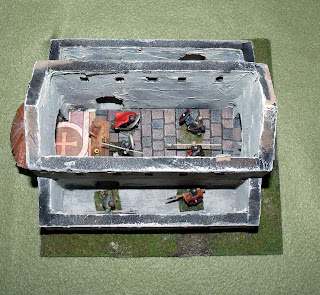 Some people will fight anywhere!

Here's another view, showing the main event as Bedwyr and one of Arthur's companions see off the Saxon raiders. 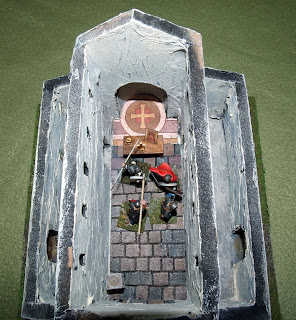 Thieving mawks off our plate!

Well, that's the end of a very long project - I think it was worth it, and I hope you've enjoyed it as much as I have!