When I did my take on Newcastle's Whitecoats, I commented that I was short of musketeers. Well, the problem is solved in the form of some reinforcements, courtesy of Perry Miniatures.

These are code SW5 from the Scots of the English Civil War range. The first thing I noticed was how delicate they seemed, especially compared to hulking brutes like those from (e.g.) Renegade. This caused me a bit of a dilemma - given that the figures were noticeably shorter and slighter than the main body of the regiment (ex Warlord Games), with very different equipment and muskets vastly shorter than the rest, would they look too "different"?

The figures are crisply moulded in a relatively soft metal, which is easy to clean to with a scalpel or a burnisher. There might have been one bit of mould line that needed a file but that was all. Flash was essentially non-existent but the ends and corners on the castings carry a lot of little curly "pigtails" that need to be checked for carefully and removed, since they add nothing to the final effect!

A buddy of mine immediately spotted the clever thing about this pack of figures. They are not, in fact, random Scots in random loading positions. They are actually sculpted going through the evolutions of loading their muskets. He was a re-enactor, and has an eye for this sort of thing.

So, here they are, from left to right:

Blow out your pan; charge your piece; put in your ball; prime your pan; bring your match to glow and finally, make ready! 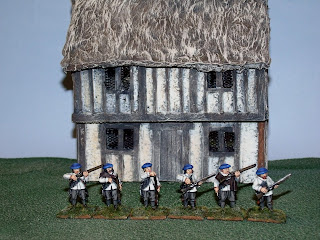 Going through the motions...


Personally, I think they blend pretty seamlessly into the rest of the regiment. Here they are, first drawn up two ranks deep in front of the house. 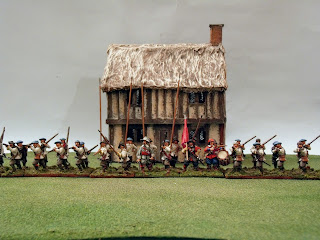 Two deep
And now three ranks deep, out in the open. 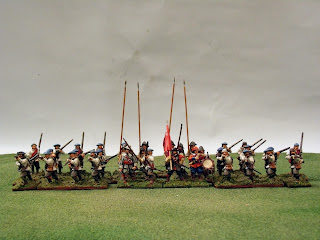 Three deep
I would recommend these figures without reservation.