As it's Easter, it seems an ideal time to put up this post. I needed a "merry" monk for my Saxon church, but having looked around, I hadn't found anything I really liked. So, I made my own - or at least, converted my own (bad pun, I suppose...).

At the time, monks and priests too had military obligations and were fully expected to defend themselves and their flock.

This one was converted from a Crusader unarmoured warrior (DAS009). The bald head appealed as it would look like he was tonsored with no additional modelling, and the bare legs were ideal for someone whose only garment would be a tunic.

The conversion involved grinding out a small amount of metal around the waist and belt (to give space to model folds), then adding length to the existing clothing, and modelling a scapular (the apron-like garment) over the robe, and a hood. Finally, I added a knife in a scabbard to the belt. All the work was done with green stuff, in short bursts, to allow bits to set before my great fingers squashed what I had just managed to shape! 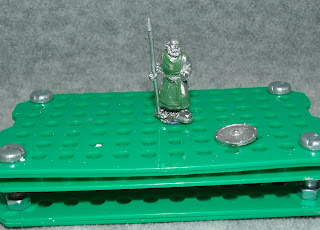 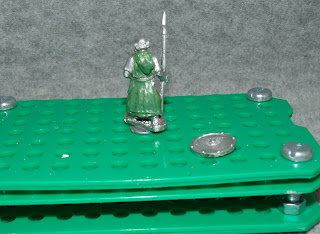 He has his belt over both tunic and scapula, which whilst not strictly adhering to the rule of Saint Benedict, would be easier in combat. Note that a belt, rather than a rope tie, appears to be the correct form - and no crucifix! An abbot would have a crucifix, but not a simple brother.

The internet has plenty of references to monastic habits, but it would be unfair of me to not point out that the late Angus McBride's lovely illustration in Osprey Men at Arms 154 "Arthur and the Anglo-Saxon Wars" was a major source and inspiration.

Looking at him, I'm not sure that "merry" entirely fits the bill. There's a statement that has been (incorrectly, in fact) attributed to the Rule of Saint Benedict:

"...But if he have been found gossipy and contumaceous in the time of his sojourn as guest, not only ought he not to be joined to the body of the monastery, but also it shall be said to him, honestly, that he must depart. If he does not go, let two stout monks, in the name of God, explain the matter to him..."

Emphasis mine. He looks to me like he fits the description, and that in all probability, he wouldn't have to explain anything to anyone twice!


Well, here he is, painted up.  With a neighbour who looks like he's a bit too familiar with the local pie shops and ale houses. Bit like the blogger, really... 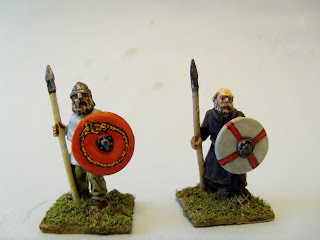 One of him on his own, in front of the church. 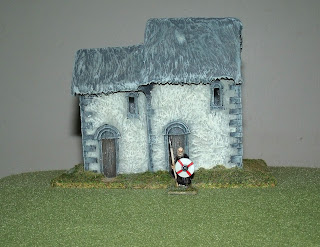 All ready to keep thieving fingers off the silverware.

And again, with his burly buddy to help him. 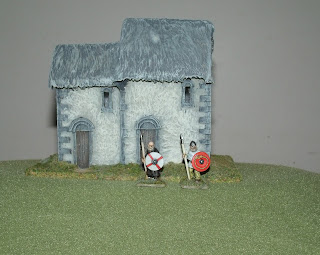