Someone asked whether I was going to construct any Sub-Roman buildings as part of this project.

I don’t have a Sub-Roman army, and I don’t have an intention of getting one (and if I keep telling myself that often enough, hopefully I’ll start to believe it), so I don’t have any obvious need for any such buildings. Also, I had thought that the Sub-Roman period had really ended by about AD600, which is too early for my Anglo-Saxon army (although feasible for my Pictish / Alban Scots army).

However, a bit of reading turned up the fact that the last Sub-Roman kingdoms in the north, Rheged and Strathclyde, were extant until they were annexed by Northumbria (AD730) and the Alban Scots (1019-1053) respectively. Apparently the Sub-Roman state in the southwest (Dumnonia) lasted until about 1042 when it was incorporated into the England of Edward the Confessor. This provides me with an excuse to add Sub-Roman buildings! It also makes avoiding building a Sub-Roman army that much harder...

I'll add a note of caution here. Compared to what is available regarding Roman, Saxon and even Pictish architecture from archaeological sources, the records regarding Sub-Roman buildings seem quite sparse. Also, differences in local culture, geography and geology would suggest (to me at least) that buildings in Dumnonia might be quite different to buildings in Rheged, which would be different again from Strathclyde. I would therefore be reluctant to make any sort of claim of archaeological authenticity for most of what follows!

That said, the limited resources I’ve found suggest that the building styles retained a good deal of Roman form and shape, but (especially in rural areas) abandoned stone and / or brick construction and tiled roofs, replacing this with timber-framed structures with cob or wattle and daub walls, and thatch on the roof. There seems to be some evidence that this method of construction carried on changing only in minor ways for centuries, in the same way that the great halls built in the Romano-British period differed only in detail from those in the Saxon and Anglo-Danish periods. Therefore these should sit comfortably with the Saxon great hall I'm building.

Excavations at Yeavering, in Northumberland, turned up the foundations / outlines of a number of what were suggested to be pre-Anglian (not a very useful term since it has a specific geological meaning too!) domestic buildings, although this attribution is a matter of debate (see here). These were all 8-9m long, with a length to width ratio of 1.5-2. Interestingly, this matches closely with the size of the Viking terraced houses excavated in York.

These dimensions give a range of 140-160mm long by 70-105mm wide, which is a nice, convenient size for the tabletop. The walls are set at 35mm high to the eaves, with roof height 60mm vertically from eaves to ridge (a roughly 60 degree pitch). The evidence suggests load-bearing posts with a wattle and daub infill, although a daubed timber wall is a potential alternative, all of which is suitably nebulous for our purposes.

The roofs obviously haven't survived at all, so whether these are straight rafters or curved cruck structures is absolute conjecture. Therefore you can feel free to have either!

The building techniques described above are very simple to replicate using the same basic method I used for the Saxon church. Make the walls from foam sheets, or use MDF to make a vastly stronger piece, at the cost of considerably more work. The third alternative, as used here, is to cut this relatively small building out of a solid block of foam. Whichever method gives the general structure, it gets rough tissue paper applied with PVA to give the appearance of a wattle and daub or cob structure. It is then very simple to add the timber framing afterwards, appliquéd on using thin wooden strips. Coffee stirrers are (or seem to be) about 1mm thick. This scales out at 56mm (no, really?!) or roughly two inches. Whether this is over-scale or not is debatable: looking at timber-framed buildings in York, and at Wealden houses, (both much later, of course, but essentially using the same techniques) the projection varies between nothing and several inches, so pay your money and take your choice. The width, at about a foot in scale, is at the upper limit. A lot of the timbers would be narrower than this. I took a different route to coffee stirrers, as noted below.

All I will say is that looking at old timber framed houses, the timbers are NOT uniform. The wood was worked green, using axes, adzes and drawknives, and the dimensions vary considerably not only between different timbers, but also within individual pieces. I’d rough my coffee stirrers up a bit and even split some down a bit thinner to avoid it looking like a job lot of planks from Jewson’s timber mill, and remember that as the wood moved when it dried, the joints could tighten, loosen or twist, and that individual timbers might even split a little, so some unevenness (within reason) in the construction is a good thing!

Windows would be limited in number, small in size, and closed with shutters. Unless you are going to build an interior, it's simpler to just add false shutters to the outside and be done with. There would probably have been a door in each gabled end. These can be appliquéd too, but I think look they better set into the thickness of the wall with a frame.

After a roof is formed, thatching can follow the teddy bear fur or towelling method, according to preference. Remember, no chimney!

Anyway, on with the build. This is such a simple build, I've done two, one from solid foam and one from MDF.

Check this bad boy out! What a find it was when this huge block of foam turned up - a bit like the Holy Grail of salvage. It's perfect to get the structure of one house from. 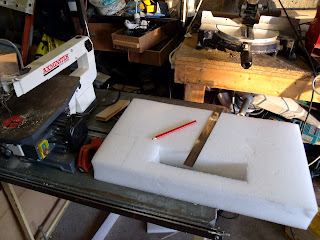 Here's a block cut out with a saw. It's too big even for my PM8 knife or the throat on the scroll saw! This one will get a slightly curved roof, per a cruck beam design. 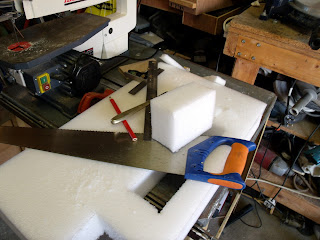 This pile of bits cut on the table saw and mitre saw, will build the other house. The MDF build is reinforced inside with some bits of angle section timber to provide more glue surface. Square section would work, but I didn't have any suitable stock lying around. This one will get a straight raftered roof. 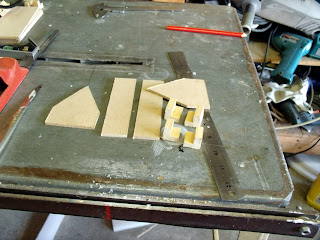 Here are the shells, straight and curved, mounted on bases (for stability) and with the doors cut out. I added the paper layer next, by coating the whole structure in PVA, leaving it to dry then sticking the paper down with more, diluted PVA. Once this was dry, I went on to install the roofs next. 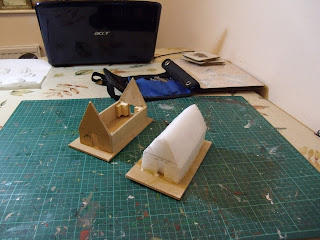 The roof bases are foamcore - it's the easiest solution. The underlying structure and covering provides plenty of strength, and foamcore is an easy way to get the requisite thickness for a thatched roof. The straight raftered roof is facile, since it's simple square, flat pieces. The curved cruck structure looks harder, but is easy enough if you score the outer side of the roof whilst leaving the inner paper layer intact. You can then simply make the requisite curve. 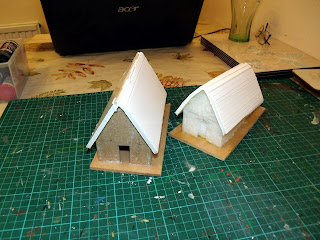 Paper and roofs on.

The next bit is to start planking! Get a pile of coffee stirrers, balsa strips or bits of spruce; a good sharp knife and a chisel; a pot of glue and (most importantly!) a comfortable chair, and away you go. I used balsa sheet 1/16" thick, heavily roughed up on the face with a wire brush. The straight beamed house got "smarter" looking timber, whereas I made the cruck beam house rougher-looking. Ironically, the rougher work was much more time consuming! The solid foam structure lends itself to having some exposed wattle showing - nicely in keeping with the rougher appearance of the woodwork. I cut down between two of the timbers and removed a shallow slice of the structure, then glued a piece of wattle cast from Fimo clay into place, making sure it sits slightly below the surface. 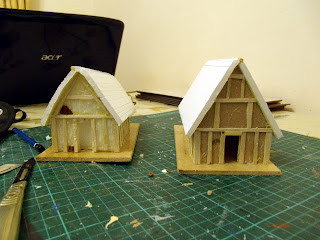 Windows (shutters actually) and doors are the next stage. They're really starting to look like houses now. 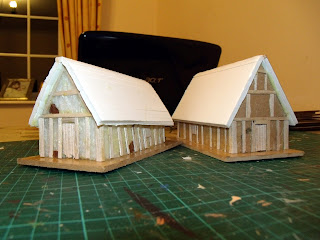 The thatch is towelling, cut into strips and and stuck down with Evo-Stik. PVA wets down the fabric and makes it lay properly. Again, the cruck beam got a rougher looking appearance. It wasn't my plan when I set out to make it look like it belonged to the Sub-Roman equivalent of Albert Steptoe, but it seems to have ended up like that. 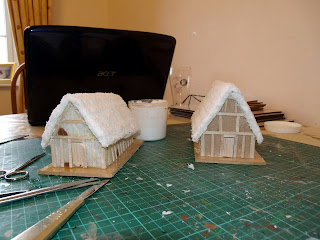 A bit of basework, PVA and sharp sand over a few slivers of waste foam to break up the ground line was the next thing before a good stiff coat of panzer grey emulsion.

I continued with the theme of a better and a worse-kept house as the painting went along. The roof of the straight-beamed house is slightly brighter and greyer, whilst the cruck beam house with its older, less tidy thatch has a bit more brown, and a touch of flock, where moss and even weeds are starting to grow. I also made the walls of the cruck beam house a darker, more brownish colour, to represent less-frequent limewashing of the plastered surface. The sense of decrepitude was emphasised with a wash of green over the wood (representing slime / algae), rank plants growing in the immediate area and a little flock on the walls to show where ivy had started to take hold. 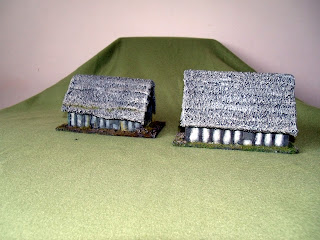 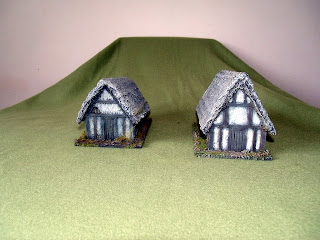 Here's the whole development with a Renegade Anglo-Saxon ceorl for scale. As I said, houses like this would very likely have continued to be built into Anglo-Saxon and even later times, so it isn't totally anachronistic. 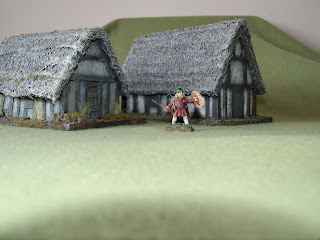 With figure for scale - bang goes the neighbourhood!

He seems quite upset - perhaps he owns the straight-beamed house and is narked by how his neighbour's lack of civic pride has dragged down the value of his property. I could do with some sort of Anglo-Saxon Albert Steptoe making an uncouth gesture to make this complete,  but you'll just have to use your imagination!