All Along The Watchtower (Part 1)... (Sub-Roman Buildings 2)

Jimi Hendrix, rather than Bob Dylan, would be my preference musically, but from a Dark Ages gaming perspective, if you go here you can find the most amazing page on Roman watchtowers. The site is in German, but Babelfish or Google Chrome's translation application will serve if you aren't fluent, and the pictures are worth a thousand words.

Then, if you go here, you will find a site (again, in German) with paper models of the frontier watchtowers that are breathtaking in any language. The link is to the timber watchtower, but there are numerous others of stone and brick if they suit your needs better.

I would argue that the paper models would be too flimsy for anything except the most gentle handling and ephemeral use on the game table. However, they are perfect scale plans for building your own in a more robust manner.

My feeling would be that stone-built Roman towers would have continued in service long after the Romans left, being repaired and patched up until they fell down or went out of use as frontier locations changed. New built ones, to account for boundary changes, were more likely to have been timber - like this one here!

I started with a pile of strips of 4mm MDF cut on the table saw, then cut to length and squared on the mitre saw. I made a mistake: the drawing from the site with the plans gives a width of 67mm, so I cut a series of strips 63mm wide to give four equal pieces and a 67mm structure when overlapped.

Now, this works, but it makes drilling the holes for the joists and positioning doors and windows much more difficult. It would have been easier to have two sides 67mm wide and two others 59mm wide. Don't make the same mistake!

I marked out for the positions of the doors and windows (allowing an offset for the way my tower sections will overlap), and a line for the location of the joists supporting the walkway. I clamped pairs of sides (i.e. a front and rear pair, and the two sides as a pair), again allowing the offset, and drilled a line of holes for the joists, corner drilled the doors / windows and opened out these holes with a chisel. I left the windows in the side walls "blind". These will get appliqued shutters only.

Here are all the bits, with some angle timber to reinforce the glue joints. 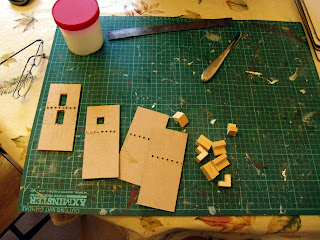 Having assembled the four walls into a square structure, I took a pile of bamboo skewers and cut off lots of pieces 95mm long and lots of pieces 18mm long.

The 95mm bits go all the way through from one side to the other, through the pre-drilled holes (which did line up, yay!), and leave about 14mm sticking through each side. The short bits go into the holes on the other two sides leaving (pattern forming here...) 14mm sticking out. These represent the beams supporting the walkway. The spacing here is perhaps a bit narrow, but no one could argue the tower would lack structural strength! 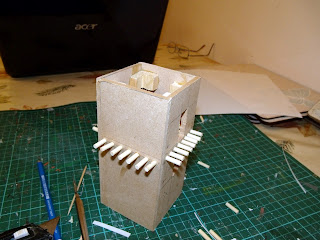 Structure with beams in place.

The walkway itself had a couple of false starts. I had planned to use 1.5mm aero modelling plywood to produce this, which would be reasonably in scale and strong enough in a deeply cut out shape. Unfortunately, I couldn't get hold of any. I considered 1.5mm spruce, but no matter how you do it, you get bits with short cross-grain sections which have no strength at all. I finally settled on 40 thou plastic card, scratched up with a wire brush and scribed at 3-4mm intervals to represent planking butted together. This was made up in four sections, butt jointed along the mitre cuts, with some fillets of 5 thou plastic card underneath to reinforce the joints. The corner joists will cover this later. The walkway was fitted with impact cement to hold it onto the joists - it would look a bit odd free floating! 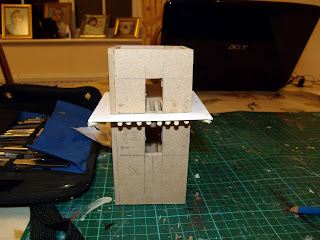 This shows the corner joists. These were notched at the building ends and simply glued in place for show. Supported on beams that run all the way through, the walkway's strong enough without these being structural. It doesn't show very well on either photo, but before gluing the walkway together, I clamped the four sections together and drilled a line of 1.5mm holes close to the outer edge. These will allow a guardrail / palisade to be fitted later. 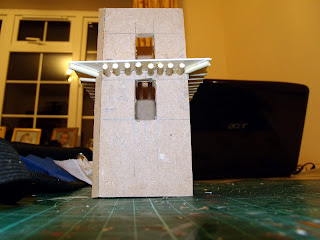 I covered the whole thing in two good coats of neat PVA, then applied a double thickness layer of hand wiping paper to give a daub-like surface. The usual balsa strips were used to make the timber framing. There are a lot of these, and they are best added a few at a time. This accounts for the boredom threshhold, and makes it easier to avoid moving recently glued ones into the wrong position.

Panelled and planked, it's starting to progress. 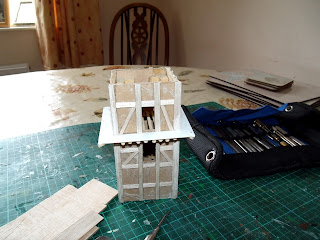 The open doors and windows, roof joists and potential for an easily removable roof all suggest the addition of an interior. I resisted this urge - basically, the thing is only just over 60 mm across inside, so wouldn't allow more than a few figures anyway. Also, keeping the walkway in proportion means that whilst a 28 mm  mini could walk round it, the bases won't fit. If you do succumb, a bit of planked plastic card (either Slaters, or the more heavily detailed waney edge boarding from Wills Kits) with a hatchway in one corner would just about do it.

Doors and shutters are appliqued on from balsa and spruce, as per normal. Since there's no interior, I left one door barely ajar and the other closed, plus a shutter open. 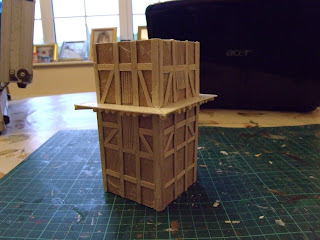 Moving swifly on to the roof, the templates from the website with the paper kit provide a perfect starting point to make it out of foamcore or MDF. I used 2 mm MDF, available from art and photography suppliers as a backing board from picture frames. I had two goes at this. First, I cut the roof as a single piece using my mitre saw and scrollsaw, carefully scored the ridge lines with a Stanley knife, then even more carefully folded it into shape. This just didn't work: I couldn't seem to get the scored folds to come out evenly. I think this might work better with foamcore, where it's easier to remove a small triangular section inside the fold to make it sit evenly.

So I cut four triangles on the correct size and shape, chamfered the inside edges and put it together with
EvoStik. 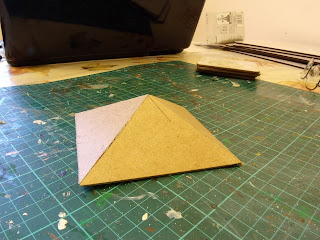 The top was shingled (Such fun! Such fun!). I decided to use a different approach to than employed on the Saxon great hall. I cut much larger shingles from card and glued them down. I cut some as individuals, and some as continuous strips, joining the gaps with cut pieces. The ridges are formed by butting the edges with plenty of glue and trimming the overlaps when dry. 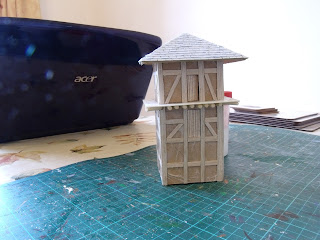 At this point, you would have a perfectly functional tower and could proceed to paint and finish it.

Since I can't resist embellishments, I went a bit further, but that's for another post!