Two parts to this post. First up, some Crusader unarmoured ceorls from their Dark Ages ranges. These are the sort of troops that would have been the actual majority of most Saxon armies. Drawn from the free, but not wealthy, bits of society, they would have followed the thegns and formed the shieldwalls. Alfred the Great used men like these to create his standing army, by using taxation to provide a wage for the ceorl while he served, so that the loss of his labour didn't result in him and his family starving by way of thanks for defending the country!

These are a nice set of figures, which needed minimal clean-up and fettling and took paint well. Considering that the eight are pretty "straight up and down", there's a surprising amount of character and variety here: clothing, weapons, headgear and facial hair show differences, and in one case the figure has a significant paunch to him, making him stand out.

Here they are, including my converted monk (far left) and the pie eating champion of Anglo-Saxon England (far right). Shields are hand-painted, but the banner is a piece of artwork from the internet, with a little hand shading. The flash has rather killed this, unfortunately.

Now, the next bit. These eight go together with another set of ten to form a single unit, as shown here. Drawn up two deep, with the banner flanked by a musician and leader. All the additional figures are Black Tree Design, except the leader, who is a single stray Renegade miniature. The musician was slightly converted - the position of the horn arm was altered and the horn added from green stuff. 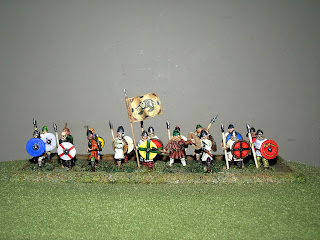 Here they are three deep, ready to see off Norsemen, Normans, Picts or Welsh. Basing is  20mm square, per WAB, and the movement tray is home-made. 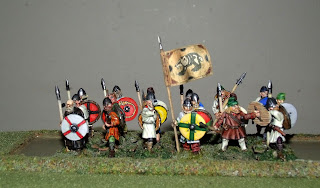