This was one of Renegade’s regiment packs. Rather than the usual 24 foot or 9 horse that you get in most of the regiment packs, in this case you get six each of foot and mounted, without command. Here are all twelve, ready for action. 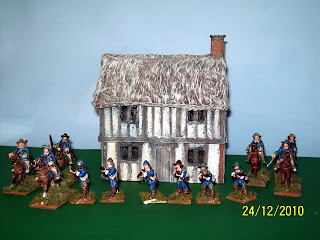 This is a good way to buy ECW dragoons – many of the rule sets specify that you need both foot and mounted figures for a dragoon unit. The figures came packed in a stout box, per normal Renegade practice. The service is best described as “slow and steady”, and in my experience it would be tempting fate to order from Renegade if you had a deadline for getting figures on the table.  I’m never in a hurry, so I can sit back and enjoy the very competitive prices Renegade charge for their products.
To the figures: the foot figures are best described as very big, very bad men. They tower over figures from manufacturers like Perry, TAG and Warlord. They have nasty, ill-tempered faces, and if they were real, no-one in their right senses would want to meet them on a dark night! The figures are well-sculpted, with good proportions, good clothing and good, complete equipment. If there is room for complaint in this area, it’s that the boot tops are a bit bucket-like. Previously, I bought a regiment pack of Saxons from Renegade. Those figures had quite the biggest hands I’ve ever seen! I’ve met people with big mawks in my life, but those blokes, scaled up would have palms big enough to sit down in. The dragoon figures, on the other hand have hands that are properly proportioned, i.e. just plain big! 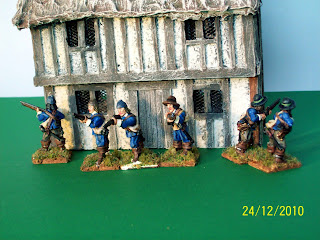 The biggest issue with the foot figures is that they suffer from severe flash. This is thick enough to need drill bits and Dremels to remove, rather than a bit of subtle scalpel work. My figures had complete webs between the arms, weapons and body and between the legs in several cases. On a couple of the figures I decided to add beards, and on another a bushy moustache, just to increase the impression of these chaps being wild and lawless. 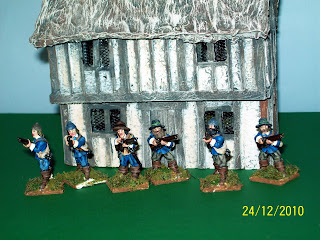 The mounted figures are interesting, in that they suffer none of the issues with flash seen on the foot. They are equally big, strong, powerful men, and look just as intimidating as their unmounted brethren. However, the appearance of the men is very different from the foot versions. The equipment, coats and headgear are not a good match for those of the (supposedly) unmounted equivalents. All muskets are moulded separately for the mounted troops, and are done very nicely. 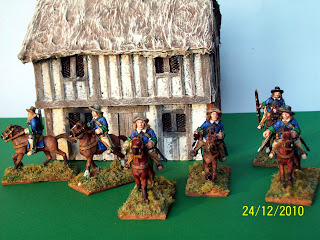 The horses are good. Anatomically, they are correct (compared with e.g. TAG), and quite slender. This is quite good, in my opinion, reflecting the fact that dragoons got second-rate horses, which were generally smaller than what the cavalry got. The poses are quite uniform, and could probably have stood a degree of remodelling, had I been more bothered. Also, the horse poses all seem very dynamic, which is at odds with the riders, who seem to me relatively relaxed in their poses.
The fit between horse and rider varies between tolerable, and quite poor. All needed some work to achieve a good matchup.
Overall, well worth the money, but if your examples are anything like mine, be prepared to put a bit of graft in between getting them through the post and onto the table.
Posted by Mitch K at 22:21 No comments: