Sometimes, you can't get the words out of your head...

When I built my artillery bastion, Ray Rousell very helpfully commented "...now you need to make the rest of the fort to go with it!"

Well I hadn't planned to, and I resisted for a while, but his words kept haunting me and eventually I succumbed.  Cheers, Ray - now all I have to do is decide what the hell I'm going to do with it all!

I knocked up two more straight sections to go around the gun position, and an angled bastion to allow flanking fire along the wall.
All these parts wwere made the same way - waste foam, painter's caulk, timber strip, PVA and sand, with odd bits of Fimo-cast hurdle here and there for variety. I'm trying to draft out a convincing looking gateway, based on various sources, but trying to make a decent replica without it becoming too involved is beating me at the moment. For now, I have enough! 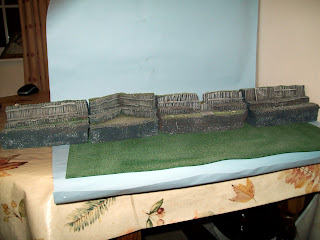 And an attacker's eye view. 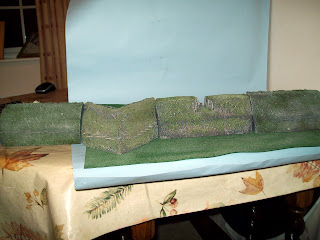 Obviously I need a bigger backdrop to photograph it against, but I'm sure you get the idea.
It was fun project, although I can't say that it's contributed much to me to getting my Anglo-Saxon army repainted!
Enjoy!
Posted by Mitch K at 14:12 1 comment:

Back when I built my artillery bastion, I said that I needed a more suitable guncrew that the couple of old geezers I had mucking about with the gun back then. 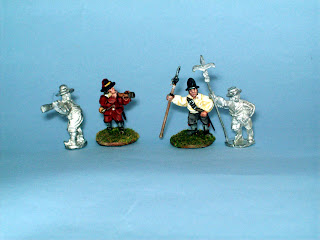 They were converted from some Glorious Revolution artillery crew from Reiver Castings. My finished versions are here with a couple of examples of the originals. I bought a pack of these figures a while back because they represented excellent value for money and provided plenty of potential for conversion to all the various sorts of people who appear on battlefields who aren't infantry, cavalry or dragoons, like sappers, commisaries and the like, as well as gunners.

The main part of the conversions was to replace the existing heads with new ones from Redoubt. A couple of packs of these give vast variety, and they fit well, scalewise with these and others.

Being from a period roughly forty years later than the Civil Wars, some modification of clothing was necessary. The matrose with the linstock gained ties at the bottom of his trousers, laces at the neck of his shirt and a sword hung on a baldric. The linstock is scratchbuilt - the original disappeared sometime during the conversion process!

The master gunner was converted from shirtsleeves to a jacket, with cuffs and shoulder rolls, plus a sword and powderhorn. 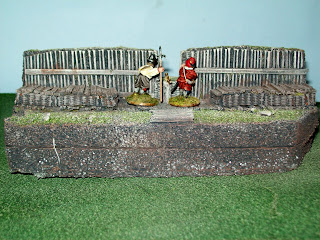 Above, they can be seen manning the small fortification swivel gun, looking a bit more like they know what they're doing than the two old codgers there before.

Below, here they are again, this time in the company of three other gun crew, built for a separate project that's ticking along in the background. These three are all ex Redoubt, and were a pleasure to paint. Note that the matrose on the left is supplied empty-handed - I built the swab for him. 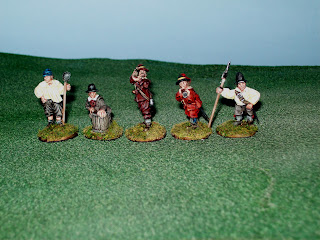 Here are all five, mucking about with that swivel again. As Duke of Wellington may have said (according to some sources...)  "I don't know what effect these men will have on the enemy, but by God, they terrify me." 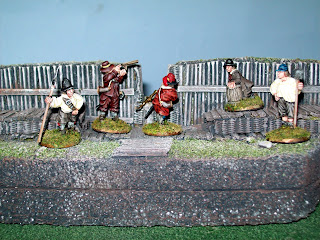 Roughly contemporary with the Grubenhaus are the Pictish wheelhouse and figure of eight house, so these are obvious choices if you need battlefield buildings for fights in "points North" of the British Isles during the Dark Ages. I've tried to come up with a quick, simple design, like the Anglo-Saxon structures I've done previously.

The wheelhouse is the simplest, but may not, for reasons given below, float everyone's boat. Despite this, hopefully it's sufficiently visually distinct from a Grubenhaus, or indeed the more square / rectangular Saxon structures.

A wonderful, very complete resource for buildings that might be useful for Pictish wargaming purposes is Professor D.W. Harding's "The Hebridean Iron Age: Twenty Years' Research". This work, freely available on the web, is full of information and packed with fantastic ground plans of buildings that show the size, shape and general layout of everything from relatively small wheelhouses up to and including full-sized brochs. For anyone with access to a good library, or willing to spend a significant amount of money, I would also recommend this without hesitation.

As an aside, brochs are generally large structures, having diameters from about 9-10m upwards (180-odd mm in 1/56th scale) and correspondingly tall. Whilst a broch would make a breathtaking centrepiece for a Dark Ages wargame, it's a bit big as a minor feature to add a dash of colour or interest. For now, I'm leaving brochs alone and concentrating on things rather smaller, quicker and simpler.

The three major characteristics of the wheelhouse are:
1 Drystone walls, of very significant thickness. The walls are frequently the best part of a metre thick, sometimes double-skinned with a rubble core.
2 A relatively shallow pitch to the roof, especially as compared with roundhouses in parts of southern England. This might be of turf, as attributed in this reconstruction in the Shetland Islands (see here also for further details), or heather thatch secured with weighted ropes as used into recent times.
3 Sunken into the ground. For whatever reason (security, ease, resistance to strong winds or whatever), wheelhouses are often set into an excavated pit, with only a small part of the wall structure visible. This is the caveat I mentioned above about visual appeal. Being half-buried, it isn't exactly a striking structure!

I based this model on the reconstruction above, with some details drawn from Professor Harding's work. The Shetland reconstruction has a roof angle of about 18 degrees. From this, the magic of trigonometry provides a vertical height for the centre of the roof! Being basically a cylinder with a slight point on it, there's no point in drawing a complicated plan.

A block of packing foam is cut to form a suitable cylinder, and marked up for the distance from the eaves to the apexs. The cocktail stick makes a nice, obvious marker for the centre point that can't get lost too easily. 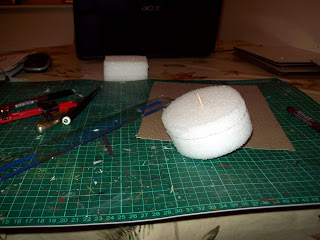 Cylinder, with height and centre marked

The waste was trimmed away carefully - you want to keep this nice and symmetrical, if you can, and a doorway was cut in. 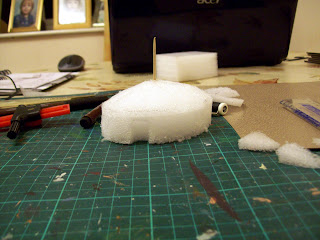 Walling allows many choices. If you make the thing out of close-cell foam, you can engrave the stone pattern with a pencil. On this cheap stuff I use, you need to add something over the top. One alternative is decorator's filler or tile cement, spread on and then engraved whilst wet. Quicker, but a bit more expensive is to use random stone pattern plastic card. "More expensive" is very relative - one sheet of Slater's random or coursed stone costs under £2 and will make about half a dozen houses like this, so it still isn't very dear.
I've used Slater's 2mm coursed stone sheet, which looks fine to me. I've folded back the plastic card in the door entrance to give the impression of the stone going through the building, and added a lintel from plastic card.
I fitted the door at this stage - it's easier, when there's still decent access. Now let the whole thing dry totally. You don't want to pull the wall surface off during the next stage! 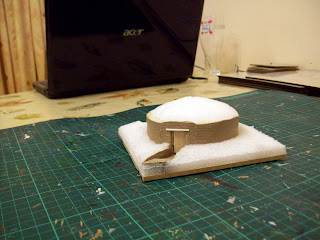 Based, with door and revetting installed

Find a suitable bit of foam for a base, and cut out a hole to take the hut. Glue the base to a sheet of (e.g.) MDF, then install the hut into the hole. Trim and shape the base to give the impression that it's rough ground, and cut a slot to represent the path down to the subterranean doorway. Don't make this too steep.
Alternatively, make it look like it's paved, in steps. The sides of the slot can have stonework added to give the impression of revetting. 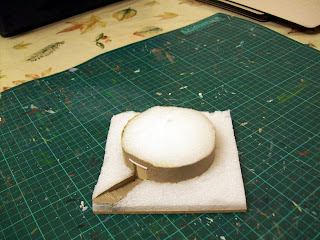 The roof, being turf, is left till last with the rest of the basework. This is PVA, sharp sand and flock - lovely! The little bits of Green Stuff either side of the door are to smooth in where the plastic card doesn't quite lap over and I had to put an extra piece in. 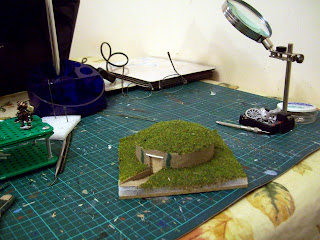 Painted up, with various grey and brown drybrushings over a base coat of panzer grey on the stone / woodwork, it looks OK to me. The Pictish ne'er-do-well posing for scale effect is from Black Tree Designs. Wonderful figures, but don't mention the customer service... 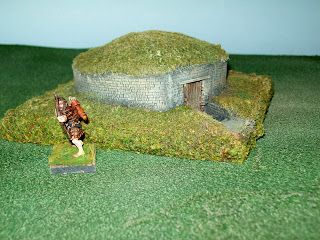 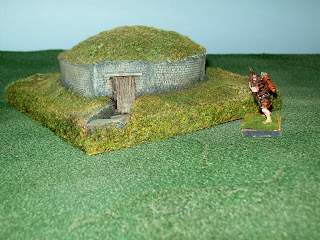 The simple two-cell Saxon church seems to have been a relatively common structure once the conversion to Christianity got well established, and the same basic design carried on being built and used on to the end of the Saxon period at least. Of course, as towns became more affluent, larger and more elaborate structures might supplement or replace the original church, but in less exalted surroundings the two-cell model soldiered on.

The construction followed the plan here, but used a different method to that I applied for the Grubenhaus, cutting from panels to form a hollow structure, rather than carving from a solid block.

A pile of bits of foam sheeting... 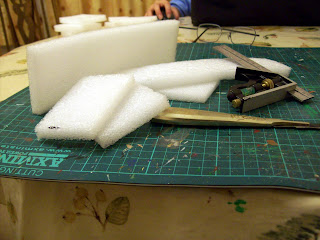 Becomes a pile of foam wall pieces! The end walls are rebated to allow the side walls to fit within. I think this allows a better appearence to the gable slopes (and it's simpler). 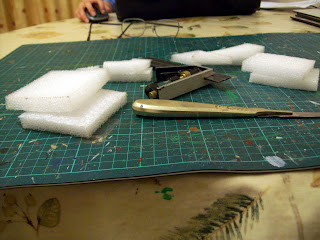 After cutting out appropriate doors and windows, the wall pieces are joined together with impact cement and pins to reinforce some of the joints. At this point the structure is a bit wobbly and mushy, but don't worry. The addition of a base and roof will provide all the rigidity that you need. 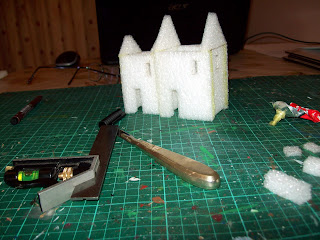 Fitting the base gives the building a bit more "heft". Whatever the final roof structure is, it will require a supporting underlayer. Foamboard works well. Impact cement should be plenty strong enough, but pin if you feel it helps. 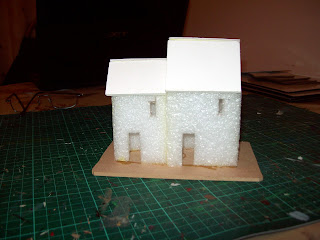 Roof and base fitted

The next step is to assemble a roof, make the walls look like something other than plastic foam, and dress it up.