Many, many thanks to everyone who has take the time to read the stuff I have put up. I would not have imagined that I would ever have got to fifty thousand pageviews.

Something A Little More Complicated - A Sub-Roman Church, Part 5

This has got a bit behind, what with doing other things, and especially with Bob completing his. After all the beggaring about with the roof, doing some work on the exterior was a bit of light relief!

Sharp sand, flock, a wash of burnt umber then drybrushing as appropriate gets the groundwork to where it needs to be. The tiled roof sections are washed with various mixes of burnt umber and ultramarine blue to give some tonal variation. Look at a tiled roof - different bits weather to totally different colours. Drybrushing with assorted light grey, terracotta and ochre shades brings everything out into relief. 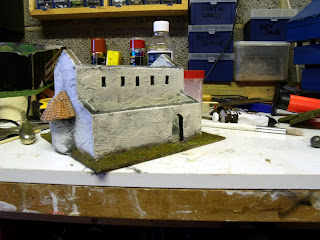 I added the doors at this point. These come from Warbases. Very nice, inexpensive, and much quicker than making your own. I can barely believe I just wrote that! Although the doorways were carefully cut to fit the doors during construction, a little bit of fettling is inevitable post-painting. I gave the doors a couple of coats of Pledge floor wax to seal them. I'll wash, drybrush and pick out details later. 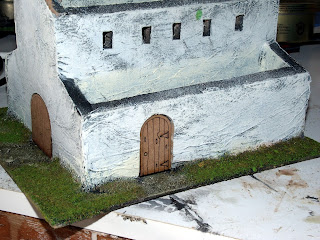 Must get rid of that nasty green stain!

Well here it is with the rest of the roof sections in place. To be honest, you could probably use it like this, once it has a coat or two of varnish for protection and to dull everything down nicely. Here's a view of apse, for those who can't wait to ogle it again... 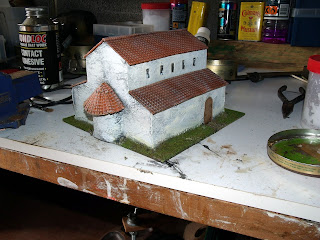 What a gorgeous apse!

And for those who have had enough of the apse-derived innuendo, here it is from the other side. 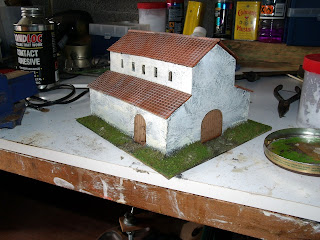 Doesn't look too bad from here either.

Now, to just finish the interior and it really will be done!

From the sublime, we now come to the ridiculous. Arthur's levy troops, in complete contrast to his elite companions. What a bloody rabble! 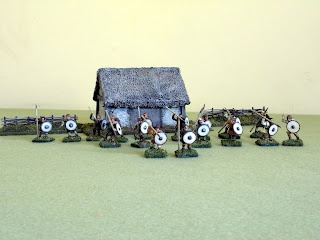 These are obviously Gripping Beast's long-awaited Dark Ages Infantry, as reviewed here. Many of these have West Wind replacement heads. The faces, both from Gripping Beast and West Wind are really full of character. I've tried to make the troops look reasonably random in terms of the colours of their clothing (the word uniform is totally inappropriate!) whilst keeping a fairly limited palette. The shading on the clothes is by inkwash. I'm in two minds whether this has worked as well as I would like. 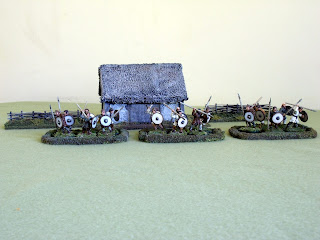 
In a lot of games, the temptation is to use low-grade troops like this to mop up high quality enemy units, to make life a bit simpler for your own good troops. Dux Brit punishes this, as the British player needs these yokels to survive and go back to farm to feed the rest of your army! 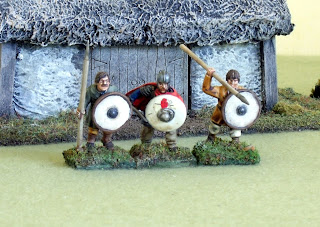 
Here they are again, drawn up in shieldwall. I don't know what effect these men will have on Aelle, but by the Goddess, they frighten me! 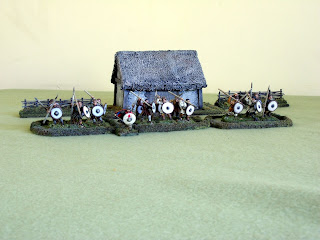 Bedivere manages to achieve some sort of order.