Artillery bastions built of earth were a common feature of warfare in the seventeenth century. Unlike earlier stone castles, they have not, as a rule, survived the passage of time well. One example that survives reasonably well in not only records, but also physically is the Queen’s Sconce in Newark.
There are excellent scaled drawings of bastions on sconces available. Papers from the Siege of Groenlo (1627, part of the Eighty Years War) show the sconces in great detail.
What I made was (more or less) the seventeenth century equivalent of a machinegun bunker: a protected position for a small, rapid firing (relatively) cannon.
Looking at the plans of the Groenlo and Newark sconces, and other information, gave me a general idea of how such a position might be laid out. Following a few sketches to fix the design in my mind, work started by taking a large block of packing foam and a Swann Morton PM8, and carving away all the bits that don’t contribute to making it look like a fortification. 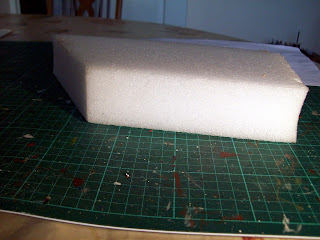 The edges were shaped to allow the item to be modular. I don’t have any matching terrain, or any plans to make any, but hey, why not? 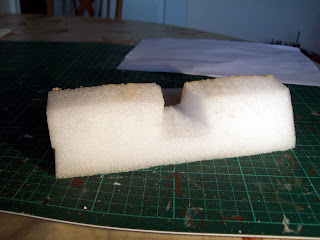 The immediate impression once the bastion was carved was that it was far too low. An additional sheet of foam glued to the bottom solved this. Once dry it was carved to match and the gaps filled with painters’ caulk. If you don’t know about it, it’s marvellous stuff. It comes in tubes you use in a sealant gun, and it can be squeezed out to fill gaps and holes in most substrates. It dries moderately fast, depending on the thickness of the layer, and best of all it takes paint a treat. Note: don’t confuse it with silicone sealant, which does all of the above except take paint. Silicone rejects paint almost totally and will therefore spoil your whole day. 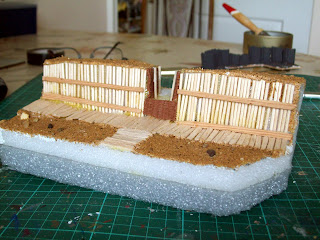 The back of the bastion would have been secured with timber revetting, to stop the soil collapsing. The revetting is made of cocktail sticks, held in place with spruce strips. Walkways would have been constructed from timber (planks, split logs or simply small tree trunks), to prevent the whole thing becoming a quagmire. These are balsa, since the additional thickness (compared to the spruce) can be more easily concealed.
The sides of the opening have wicker hurdles cast from Fimo clay and supported with cocktail stick timbers to support them.
A generous coat of PVA and a layer of sharp sand start to remove the impression of waste plastic. 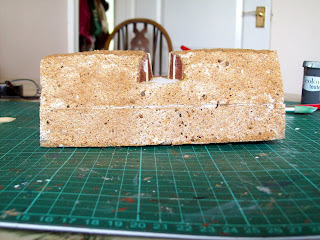 A base coat of Nearly Black (panzer grey to us) paint was followed by repeated drybrushes with various shades of grey and brown. A coat of flock went, then more drybrushing, then Pledge floor wax, with W&N matt to finish. Here's the completed position. 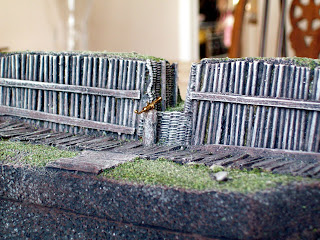 The cannon is an Armati products falconet, from Cornwall Model Boat Supplies. The falconet is a beautifully made two-piece kit in brass. Here, it has had a couple of washes of sepia ink but otherwise is as it came out of the packet. Although thought of as a naval weapon, there is no reason to believe that such a gun would not have been used in a defensive works (and indeed there is some evidence that they were). Falconets were not infrequently breech loaded, using prefilled breech pieces held in place with wooden wedges (“thundermugs”) and ready-made packs of small shot. A good crew could manage the almost astonishing rate of fire of two rounds per minute, as long as the thundermugs lasted! 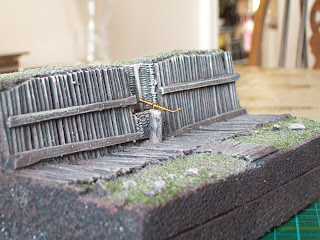 Infantry slogging forward into this hail of fire could be cut to ribbons. Here's an attacker's eye view. 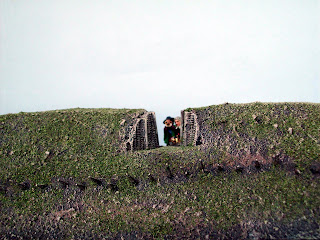 The two herberts manning the gun are TAG renaissance figures, in this case making the pretence of a couple of old codgers who are either in the wrong place at the wrong time or simply trying to prove they can still do it like they claim the used to be able to. I’ve got some more appropriate (i.e. more professional) crew on the stocks to replace these two hooligans, but at least they illustrate the scale. 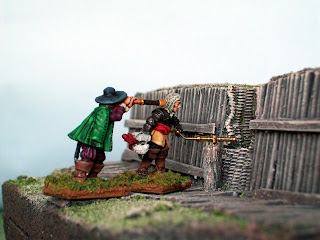 A Field Position, Gabions in Use

After making the gabions, the obvious step was to actually do something with them. Gabions were used to provide protected firing positions for field artillery, so this seemed like the obvious thing to do. Whilst these are intended for my ECW army, gabion positions like this were familiar on battle fields from more or less the dawn of artillery up to the end of the nineteenth century, so hopefully this will find wide application.
A bit of hardboard cut to shape on the scroll saw and covered with PVA made the base. Casting plaster was added to give a bit texture. Casting plaster actually isn’t the ideal the ideal medium for this, I found. However, I only did it because I’d run out of the usual cheap and nasty decorators’ filler, and I won’t make a habit of it. It’s very unforgiving, I found. It probably responds better to a more expert touch than I have. The gabions were stuck down with impact adhesive. The short ones are full size castings cut down with a fret saw, which works very well. The plaster doesn’t crumble or splinter and you get a lovely neat cut. I put half on, and left it before doing the rest, so I had somewhere to pick it up.

I put some PVA and sand around the bottoms of the gabions to make sure they appeared firmly stuck to the ground. The real things would weigh in at just shy of three tons by my reckoning, so they are going to squat very heavily indeed!

A coat of “Nearly Black” (panzer grey to the likes of us) emulsion paint provided a base to work on. This was followed by successive drybrushings of dark brown, mid brown and pale sand emulsions, and a coat of flock. I sprayed the whole thing with Pledge floor polish next to seal the flock, then drybrushed again, mainly on the flocked areas. A few tufts of static grass and two sprayed coats of Winsor and Newton Galeria matt varnish finished it.

Here’s an attackers’ eye of view of it occupied by my Reiver Miniatures heavy gun, and two more views showing how the gun sits neatly in the cutout.

It was great fun to build this, and once the castings were done, very quick. The whole thing was probably no more than a couple of hours work spread over a few nights.
Posted by Mitch K at 20:37 1 comment:

To which the only real answer of course is “And the same to you to, with hurdles on!”.
This is my gabion jig, cunningly disguised as a piece of old rough timber. The large holes are sized to take sections of dowel to keep the cylindrical shape. I set the jig up to make large and small gabions, but in practice the small ones simply didn’t seem very useful. At the front is a series of holes drilled for weaving hurdles. All the holes are spaced to give about a scale gap of about 6-8” between posts. In the case of the gabion jig, take care that there are an odd number of holes, otherwise it doesn’t weave properly.
In all cases the vertical struts are 18 gauge brad nails, and the weave is 30lb fishing line. This is about a thumb’s width thick in scale, so is a decent compromise between being realistic and not taking three days to do the weaving. Once woven the things get a single coat of PVA. Only a single coat – if you use multiple coats it fills the detail. I found this out the hard way. I then cut the woven sections away with a metal cutting disk in a Dremel tool. The gabions get a section of suitable dowel glued in, and the top surface textured using PVA and sharp sand. These are the originals here.
These are used to produce the moulds, from Siligum two-pack silicone. The moulding process is (I think) fairly simple and produces eminently usable moulds. As far as I can tell, they are reasonably durable. I’ve done nearly twenty gabions and the mould seems to be holding up. The instructions suggest up to 50 casts can be made before the mould fails.
Here’s the end product. The gabions (and the white hurdle) are cast in restoration plaster. This is fairly easy to use, and as hard as iron. I’d make a couple of recommendations, though.
The gabions need something in them to act as a sprue, to allow you to remove them from the mould. I find a biggish, coarse threaded screw works well (it unscrews from the final item easily). I would recommend mixing the plaster fractionally wetter than recommended. It’s easier to work and get the air bubbles out if you do.
The only problem with restoration plaster is it takes an hour for each cast to set up. Hence, on a good evening, you can cast about three gabions. If you want a line of twenty, don’t be in a hurry. So, I tried something else. The brown hurdle is Fimo polymer clay. It works extremely well in a flat mould, but I can’t see it holding the detail on something like the gabion when you remove it. However, I churned out ten hurdle panels in about a quarter of an hour, then a total of thirty minutes to bake them. To my mind this qualifies as quick and easy.