The finished grubenhaus. ﻿First step was a layer of PVA and sharp sand on the groundwork, blended up close with the walls and roof. Next came a coat of panzer grey overall followed by the flock. I drybrushed with a variety of browns, greens and greys to taste, varied in weight as the tones got lighter. The final colours were off-grey across the building and an ochre-ish shade on the grass. A coat of Pledge Future to seal and Galeria matt varnish on top were the final steps, except for a touch of static grass close to the walls. 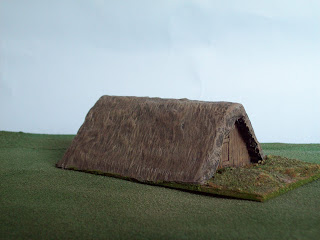 And again with a Black Tree ceorl to show the scale. 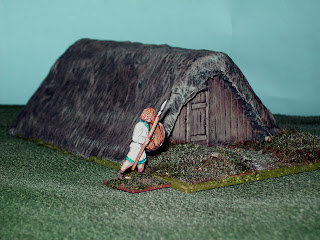 The same surly perisher on the other side, showing the door. 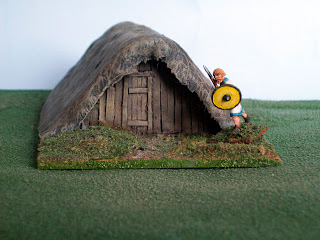 The back wall, with no door. 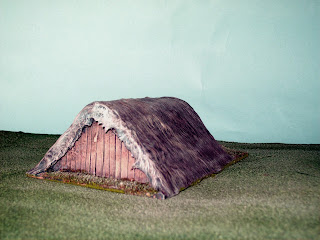 Quick and easy to make, cheap, and pretty effective. Every game table should have one!
Enjoy!
Posted by Mitch K at 08:26 2 comments:

Contructing the end walls is nice and simple. Strips of 1 mm balsa, with an angle cut on one end (set the angle from the roof using a sliding bevel), glued down. Small gaps don't matter, nor do deep notches where the planks go around the purlins﻿. By aiming for 2-4 mm random strips, this equates to planks roughly 4"-8" wide in scale, which would seem about right. My rough calculations based on the West Stow reconstruction support this, but on the other hand, they could just as easily have gone to Jewsons...
The door is appliqued on, using thicker wood (matchsticks) for the frame. 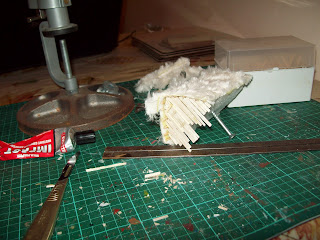 Cut the floor ends to length once the wall is complete. You can make them slightly higgledy this way and it means you don't have to worry about cutting accurately to length when you fit the strips! 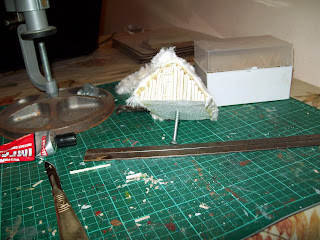 The other end has no door, so is simplicity itself. 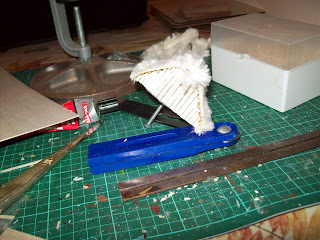 At this point, glue the house to a base (MDF or according to taste). Once dry, give the fur a thick coat of PVA glue and "comb" it down to give a thatch effect. Doing this once the house is based helps to get the thatch nicely in contact with the ground. Once totally dry, if necessary trim any loose fibres.
I used the same finishing method I've used on my other terrain pieces (PVA, sharp sand, flock and emulsion paints). The completed piece will be along shortly.
Enjoy﻿!
Posted by Mitch K at 18:58 1 comment:

Putting the roof on the grubenhaus is a more involved job than shaping the building. The main thing is that you will only get one go at the process: if it goes wrong, there is no way (as far as I know) of proceeding except to throw the whole thing away and start again. Whilst the components are cheap, getting to this stage has involved some investment of time, so I prefer to go carefully.
The roof components are shown here. The grubenhaus, with the purlins in place, a piece of fur fabric considerably larger than the house, and impact cement. If you feel that the fur fabric is not going to represent the depth of a thatched roof sufficiently, at this stage add an "under-roof" of foamboard or thick card, then proceed as below. 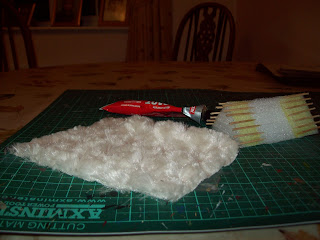 Apply plenty of glue to the grubenhaus roof and purlins, and a good layer to the back of the fabric. I've found that a largish sized woodscrew forced into the foam gives a decent handle, with plenty of purchase. And you definitely need it! Impact cement has a habit of getting all over everything, dripping and oozing, and the least little bit on your finger will stick to something awkward at the most inopportune moment. The vice helps to keep things under control. 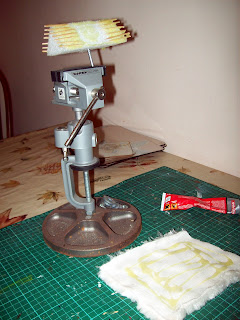 Once the impact cement has gone from wet to tacky (almost dry to the touch), fit the roof to the fabric. It's much simpler to do it that way around than to try to drape the fabric onto the roof. Place the roof down onto the glued area firmly. Once it's pressed down, the chances of you getting it apart in such a way as to have a second attempt are about nil, so go carefully! 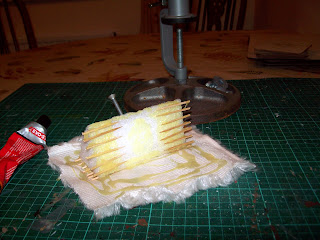 ﻿Now simply roll the roof over onto the other glued section of fur, and there you go, a thatch! Albeit a pretty wild, out of control one. 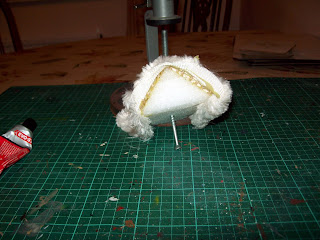 ﻿The wild wooliness is then controlled. Wait until the glue is totally dry - if you don't, you'll never get the fuzz out of the knife you use! Then carefully trim away the excess fabric. I've found a knife works better than scissors, unless you've got ultra-nice heavy dressmakers scissors. My wife has, but let's not go there... 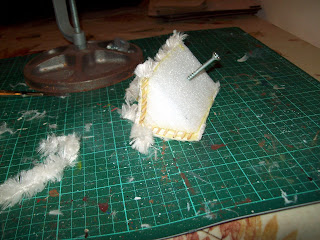 Next step is to dress up the ends, to cover up the foaminess.
Enjoy!﻿
Posted by Mitch K at 11:06 1 comment:

I put the plans and description of a Saxon grubenhaus up a little while ago. Making one for the wargame table is easy enough.

The basic material is the polyolefin packaging material I've used before on the field fortification and timber frame houses. Wonderful stuff, and since it gets thrown away otherwise, so very cheap! 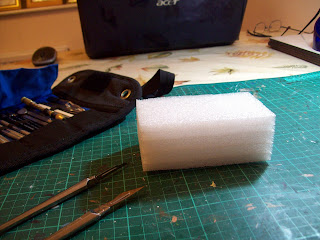 With all the bits removed that don't contribute to making it grubenhaus shaped! Blue foam (glue problems not withstanding), balsa or even offcuts of timber would all work as alternatives, albeit with more effort. 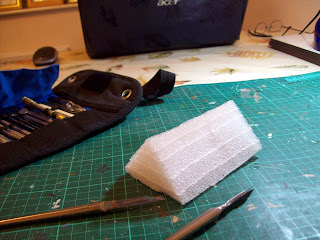 Purlins are added from cocktail sticks, attached with a good stiff layer of contact cement. You need purlins at both ends - I just hadn't got to the other end by the time I took the picture! The overhang of the purlins is given on the plan, but needn't be too precise. 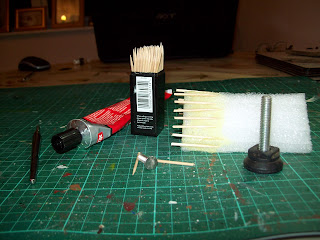 The next thing to do is to add the roof, but that's a post on its own. Whilst you're clicking to the next post, this will give plenty of time for these bits to dry!

The Marquis of Newcastle's Regiment of foot, known variously as the Whitecoats or Lambs, are probably best known for their defiant last stand at the Battle of Marston Moor. I'm only about 25 miles from the battle site, and when I drive past the image of the last stand often goes through my mind.

With this in mind, please meet my latest ECW foot, my take on Newcastle's Whitecoats.

Here they are, standing in a row, or two rows actually. Warlord figures, just for a change, but I modelled most of the shot with bonnets. Warlord only include one bonnet per sprue of foot, so the rest were added by me from greenstuff. This gives some variation, of course, but these bonnets would not have been a standard issue item.  One other thing I did with these figures was to paint the whole lot at once, except for the command. To be honest this was too much - I got heartily sick of shading twenty jackets, pairs of trousers or faces at a a time. Normally I do no more than a dozen figures at a time, and I think I'll go back to that from now on. 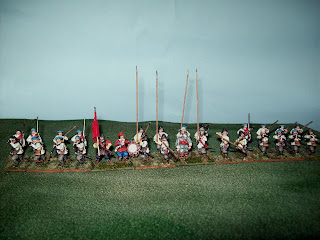 The command. The ensign is based on the designs in Osprey's Campaign series volume on Marston Moor. The sergeant, complete with partizan, is a spare pikeman body with arms added from the many extra pairs to be found in Warlord's Firelock Storming Party. 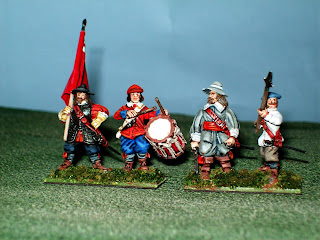 And the command again, from the side this time. The camera flash has been unforgiving as far as showing apparent shine on the ensign, unfortunately. 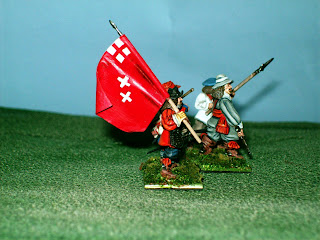 Shot, showing the bonnets. The fellow is the sash is getting to act as a file closer. I did a few shot with other headgear for variety. 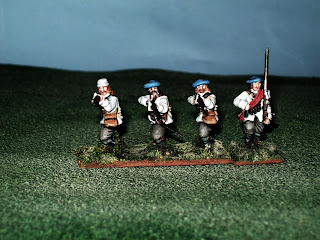 Pikemen. The figure at the back is wearing a helm that I added using plastic card and greenstuff. I'd modelled helmets before on assorted Dark Age figures, but this was more difficult, largely as a result of the brim. I wanted nearly all of the pike to have helms, though and this was the simplest (OK cheapest, if I'm honest) way. There are various sources showing a wide selection of widely different helmets being used, from ultra-crude to relatively refined. Those I have modelled may err toward the former... 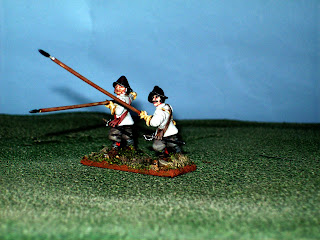 The regiment, drawn up three ranks deep this time. One disadavantage of the approach I've used for this and my Greencoat regiment (i.e. use two Warlord Infantry sprues per regiment  and cobble up the command from a single command sprue and whatever is left) is that the pike to shot ratio is way off what it ought to be. In this case, I have 16 shot and 12 pike (command is figured  as included with the pikes), for a ratio of 4:3. This ought to be more like 3:2 or even 2:1 in favour of shot, so I need to think about adding between two and eight additional shot to the regiment. I like the way Redoubt look with Warlord figures, so I'll probably go down that route. 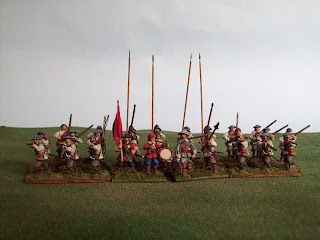 Over at the Lead Adventure Forum someone asked if anyone had any comparison information between figures from various ancients miniature suppliers.

I answered with the usual "Well these are about the same as those but these ones are a bit smaller" sort of thing, but on the grounds that a picture is worth a thousand words, I've got these two. 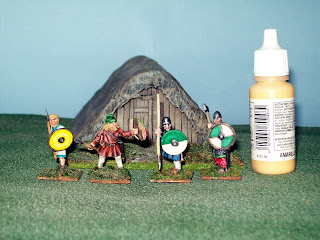 Left to right, we have figures from Black Tree Design, Renegade, Gripping Beast and Crusader. The Vallejo paint pot is for external reference. All the miniatures are based by gluing the metal base to a 20mm square of 40 thou plastic card, with a strip of magnetic sheet attached to the bottom, so this should be uniform (at least, it's intended to be!) 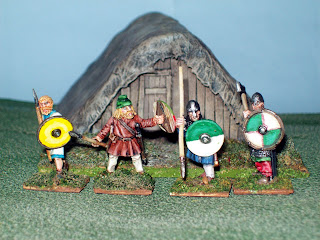 A closer view, without the bottle, gives more of a sense of the shape and proportion. Heightwise there's virtually nothing between them. Black Tree and Gripping Beast are more slender: realisticly proportioned would be a fair term, with Renegade significantly more "blocky" looking. Crusader are somewhere between.