Well, let's put it this way. I now have quite a lot of Pictish skirmishers, and an increasing number of cavalry. I can whizz round the battlefield and shoot arrows and javelins at people I don't like, but the army is a bit lacking in core units! I'm hoping to start addressing this at the weekend.

It's the Vapnartak show at York racecourse this Sunday, which has been great fun in past years and I hope this year will be no exception. The chaps at Gripping Beast are bringing me along a bunch of Pictish minis and I'm hoping to pick up some Crusader armoured Scots, which together will form the hard core of the army.

I'm working on the post-Roman fortress walls I threatened to start on in an earlier post. I've spent some time converting the drawings and photographs in Leslie Alcock's various books into a set of dimensions and some plans and sections to scale the build from. I have acquired a supply of extruded blue polystyrene foam to use for the drystone walls.

This bit of the build was a head-scratch moment. As you know more or less all my terrain is built out of waste polyethylene foam, cut to shape and covered. It's nice easy stuff to work with but it isn't something you can easily engrave stonework into, and the idea of applying plaster and hand-engraving was more than I could face.

I had more or less settled on either using extruded polystyrene or else casting the drystone panels in casting plaster. The latter didn't really appeal. If there's one thing about drystone walling it's that it definitely doesn't follow a pattern, and even if I made up two or three moulds this repeating panel would start to be a bit obvious. Making the whole thing from extruded foam appeared to be eye-wateringly expensive, so I wondered about applique-ing drystone panels made from thin polystyrene between the timber uprights?  Genius! Just one thing... How do you glue polystyrene to polyethylene without it falling to pieces at a touch or melting the PS?

I tried a few things: stock PVA, wallpaper overlap adhesive, epoxy, solventless builder's glue, none of which actually worked. Then I tried this stuff: Gorilla Glue! I normally use this for mending furniture, but I decided to have a punt. I applied a very thin layer to the PS first, and was pleased to see it didn't melt! I dampened the PE foam slightly, then put then together. Before applying anything, I had lightly scored the joining faces of both substrates with a scalpel, to allow a bit of penetration. Two hours later and no power on earth will get them apart!

The stuff isn't cheap, but its far more economical than using epoxy or cyanoacrylate on those sort of areas.

How NOT to strip miniatures...

I was almost tempted to put in a new label, "how not to" for this post.

I had a bunch of Newline Designs Pictish cavalry. I had converted and painted these when I first got back into gaming, and had based them for DBA. Well, no one was playing DBA in 28mm, so hence the other army types. The painting was ropey even by my generous standards, so I decided a clean and spruce up would be in order.

Now these had been varnished with about three layers of polyurethane, one gloss and two matt, over acrylics and a car paint primer. Hence, the usual trick of kitchen power spray was about as effective as spitting at them. So I went up to using pine disinfectant. After five days of soaking they were merely a bit discoloured and the paint was still as solid as a rock.

From here I went to what I thought was gross brutality. Dichloromethane...

Dichloromethane is the active ingredient in Nitromors paint stripper and can usually be relied upon to take more or less any coating off more or less any surface (provided it doesn't simply dissolve everything!). It's also a "go to" solvent in the laboratory for extracting tightly bound analytes from tough samples. So, on these two grounds, I had high hopes of success.

Three days in DCM including a gentle poke with a brass brush, and... NOTHING! OK, not quite nothing. Here and there were signs of things softening a bit, and some colour had leached into the solvent, but you could barely see the effect.

So I decided to take a leaf from Marsellus Wallace and "...get medieval..." on them. I allowed the residual solvent to evaporate and put the figures in a pot of dilute caustic soda.

Now that worked. A bit too well, hence the title. It removed all the paint. Every trace. In one fell swoop.

When I rinsed the residue away, I found to my horror that it had also softened and debonded all the green stuff I had added to model armour, helmets, facial hair, weapons and so on, and had used to cover the cut and pinned joints where I had reposed both horses and riders!

And it had weakened and destroyed the epoxy and cyanoacrylate I had used to hold the pinned parts together in the first place! 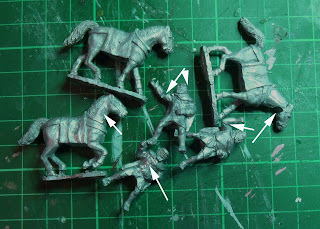 This lot got taken to the cleaners! Arrows show (some) places where green stuff came away.

Luckily I have managed to keep the relevant parts together to re-create the figures. Oh well!
Posted by Mitch K at 20:34 1 comment:

Email ThisBlogThis!Share to TwitterShare to FacebookShare to Pinterest
Labels: Modelmaking

My wife has a blog too!

Fair warning, it has nothing what so ever to do with the sort of thing you might find here, but go and have a look at my wife's brand new blog at:

I am constantly in awe of her skills. I think you will be, too.

Happy New Year - The Shape of Things to Come

A very happy new year to all of you!

Just to kick off as I mean to go on, I thought I'd get a post in early.

A small foretaste. My Pictish army will include a fairly large mounted element. I have managed to get ONE done (they stalled a bit in the face of other things), and here he is. 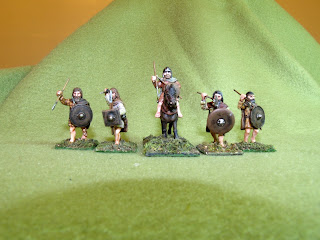 All the minis here are from Newline Design. The rider is a minor conversion, in that he had the spear arm re-positioned and a helm modeled with green stuff.

A roughly double move (depending on the era, the move is more or less) compared to infantry, and in the case of the AoA list, free of the problems of warband status, these men can race round the battlefield and wear down the slow, slogging Saxons, wild Norse or lumbering Sub-Romans!