A hovel, in its original sense, wasn’t just a rude filthy dwelling, as we think today. It was a simple shelter, ranging from a sort of temporary shed, to a more permanent building just short of a cottage.
A bodger worked in the woods during the summer, cutting, splitting and turning green wooden items. Bodgers are mainly thought of as making chair legs and spindles, but any job lot turning would have been done by bodgers. They would work where their materials were, and live, work and store their products in a hovel until they were ready to be carted off to the seller or end user.
The hovel would be made of rough cut timbers, held together with rope or withies. The timbers were apparently simply tied and not notched. The whole thing was then thatched with birch branches. Close to the front opening would be a set of chopping blocks for rough hewing, and somewhere nearby would be a shave horse for roughing sections down with a drawknife or spokeshave.
The bodger would have a pole lathe set up, but all the other woodland tradesmen, the besom binder, the clogger, the hurdle weaver, the rake toother or the peg maker would use the same basic structure, with their own particular tools.
Here, a Redoubt Enterprises dragoon investigates the hovel for dangerous parliamentarian agents disguised as chairlegs. (Well, they're right wooden lot, them parliamentarians, aren't they...) 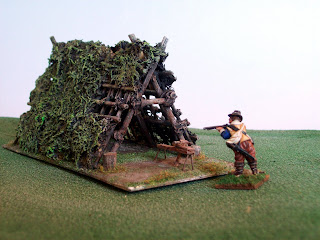 The base is a section of hardboard, drilled to take the “A” frames, and chamfered at the edges (the latter because I liked it). The four “A” frames and the ridge pole are bamboo barbeque skewers, cut and joined with cyanoacrylate. Over this went a lattice of cocktail sticks, cut down to length, held in place with impact adhesive. The thatching is sheets of moss scraped of a garden wall, glued down with PVA. I then put a good coat of diluted PVA over the whole thing. I confess I couldn’t face going around every joint with thread to make it look tied together, so I cheated and just did the most obvious ones at the two open ends. 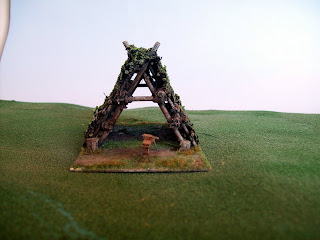 Short dowel sections make the chopping blocks, and the shave horse was made from aero modellers’ spruce sheet and dressmaking pins. The tools (hewing axe and drawknife) are wire and greenstuff.
Hovels like this probably existed back into the Middle Ages, and certainly as late as the end of the nineteenth century, so it can serve to add a bit of colour and character to any battlefield over a long period. 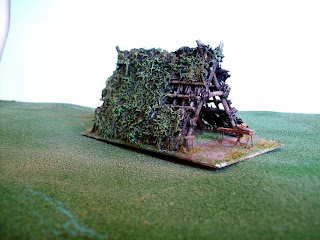 I finally managed to get some slightly better photos than those I originally posted. I like my normal camera much better.
Enjoy!
Posted by Mitch K at 19:50 3 comments: