At last I've got something finished to show off! 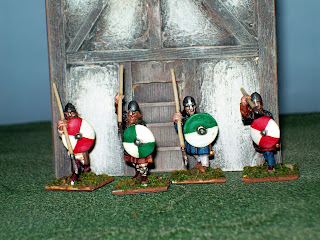 These are Gripping Beast Saxon Thegns. These were the first, and only, thing I've ever bought from Gripping Beast that were not perfect. In the original set I ordered, one of the figures had a miscast arm - essentially it was missing the forearm and hand. I've never had a miscast from GB before or since (I've bought a fair few things from them too, by no means all of which are on here). I contacted them, and I was blown away by their response.

I had half expected them perhaps to say I should return the bad one and they'd send me a replacement, or to offer some credit against a future purchase. But no, the chaps at Gripping Beast sent me an ENTIRE PACK as a replacement, free of charge!

Let no one say that GB don't look after their customers. I've met the chaps from GB at a couple of shows, and they are great guys in the flesh too: chatty, helpful and fun, as well as selling great products. Their demo games are well worth seeing, I can tell you.

The figures themselves are among (I think) slightly older castings from GB, in that they have attached shields. Most of the later / current ranges have separate shields. The castings were slightly flashy, but since the metal used is soft, cleanup is very easy. 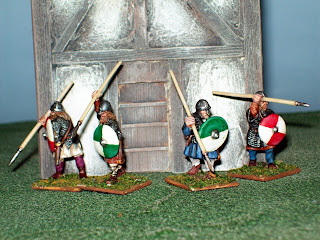 I bought these a while back but they languished half-done while I had the bit between my teeth with my ECW army. I finally gave them the attention they deserve and got them finished. There's a nice lot of variation between figures in terms of dress and accoutrements (pouches, weapons etc) and the faces are very expressive. Being from a time when uniformity in an army was a contradiction in terms, these are great. My painting probably doesn't do justice to the character and individuality you get in these figures. The GB ranges mix nicely with Newline Design, Black Tree and Renegade at least (in my opinion), to provide a wide selection of poses. Note that the figures DON'T come with spears. You will have to provide your own, or other weapons to your taste. The ones here are from a job lot of spears I bought from Newline Design, who, I might add are equally helpful, obliging and  all-round good chaps too.

I'm resurrecting my Anglo-Saxon army. It has largely languished, part-finished and part-based for DBA since I came to the conclusion that no one was playing DBA in 25/28mm! At roughly the same time I got the ECW bit between my teeth and consequently nothing had happened for quite a while.

I decided to rebase the minis for WAB, re-paint a few and go that way. I'll post some stuff about the figures as I get them ready, including some new stuff that had sat around unpainted for too long.

However, in the mean time, here are some drawing for a grubenhaus and a small Anglo-Saxon church. The originals are A4 size, so if you print them as full A4 documents you can scale straight off them for 28mm.

Grubenhäuser are small, semi-subterranean buildings (literally "pit houses") that seem to have been common across the Germanic world, and Anglo-Saxon England was no exception. 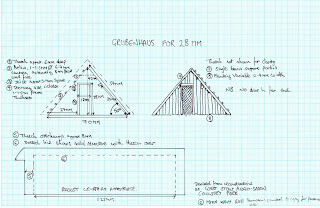 There seems to be debate over the use of Grubenhäuser: whether they were dwellings or essentially just workshops. Some of the smaller ones that have been excavated contain what are identified as loom weights, which supports the hypothesis of being workshops, but this doesn't seem to be univerally the case.

The plan is for a much larger building than the 2 x 3 m structure that is suggested as a "typical" Grubenhaus, although it's certainly within the range of sizes of sunked floored buildings that have been excavated, according to the literature. See, for example Sussex Archaeological Collections, volume 140, 2002, pp 41-47

My dimensions came from the reconstruction at West Stow Country Park. I have a picture somewhere with someone helpfully standing outside the door and I scaled it from him. Scaling up or down wouldn't be difficult, especially regarding the length of the building - just chop it off!


The Church is derived from from this reconstruction of the Beckery Chapel at Glastonbury in Somerset. Again, I sized it from the doors and bodged the other dimensions to fit. This sort of "two cell" church is considered typical of Anglo-Saxon village / settlement churches. They were, it seems, often constructed from stone, frequently being the only stone buildings among the timber structures around them. Alternative construction methods other than true masonry apparently included rubble and mortar, cob and even reclaimed roman brick! Roofing might be thatch, timber shingles or possibly stone slabs. 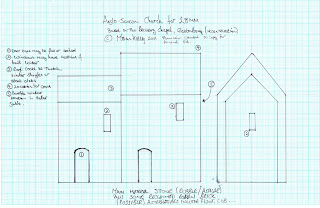 I haven't put a post up for a while. It isn't that I haven't been doing lots of stuff, but I seem to be in one of those phases where everything is "in progress" and nothing is actually getting done!

Stuff seems to creep forwards but that's about it. Maybe I've got too many things on the go at once, but I can't make myself put any of them completely onto the back burner.