Hedges are great. Ideal as markers, cover or edges on the battlefield.

Now, I don't mean privet or box or anything lightweight like that. I mean a proper hedge. Hawthorn, or better yet, blackthorn. These hedges, if they are carefully maintained and trimmed,  every few years, can be "laid". This is a process where thicker vertical stems are cut partway through, then pushed over at an angle to provide an interlocking wall of growth, going horizontal and vertical.

Basically, you can't force your way through a well-laid hedge with anything much smaller than a decent sized tractor. And climbing over it isn't recommended either. The thorns will cut you to ribbons (with the added attraction that if it's blackthorn, the cuts inevitably seem to fester - yuck!). It's like a barbed wire entanglement - just more attractive to wildlife and much nicer to look at!

There seems to be evidence of deliberate hedging and hedge laying in the British Isles going back to the Bronze Age, so a set of hedges is a useful addition to a battlefield in any era. Over that time, different styles have devloped, in response to different requirements (to mark a boundary, or retain sheep as opposed to cattle for instance) and variations in climate. So it is possible you could get a hedging expert who will tell you your Yorkshire-style hedge has no place on a southern battlefield, but I'm prepared to take the risk!

I prepared my MDF strips by champering the edges: 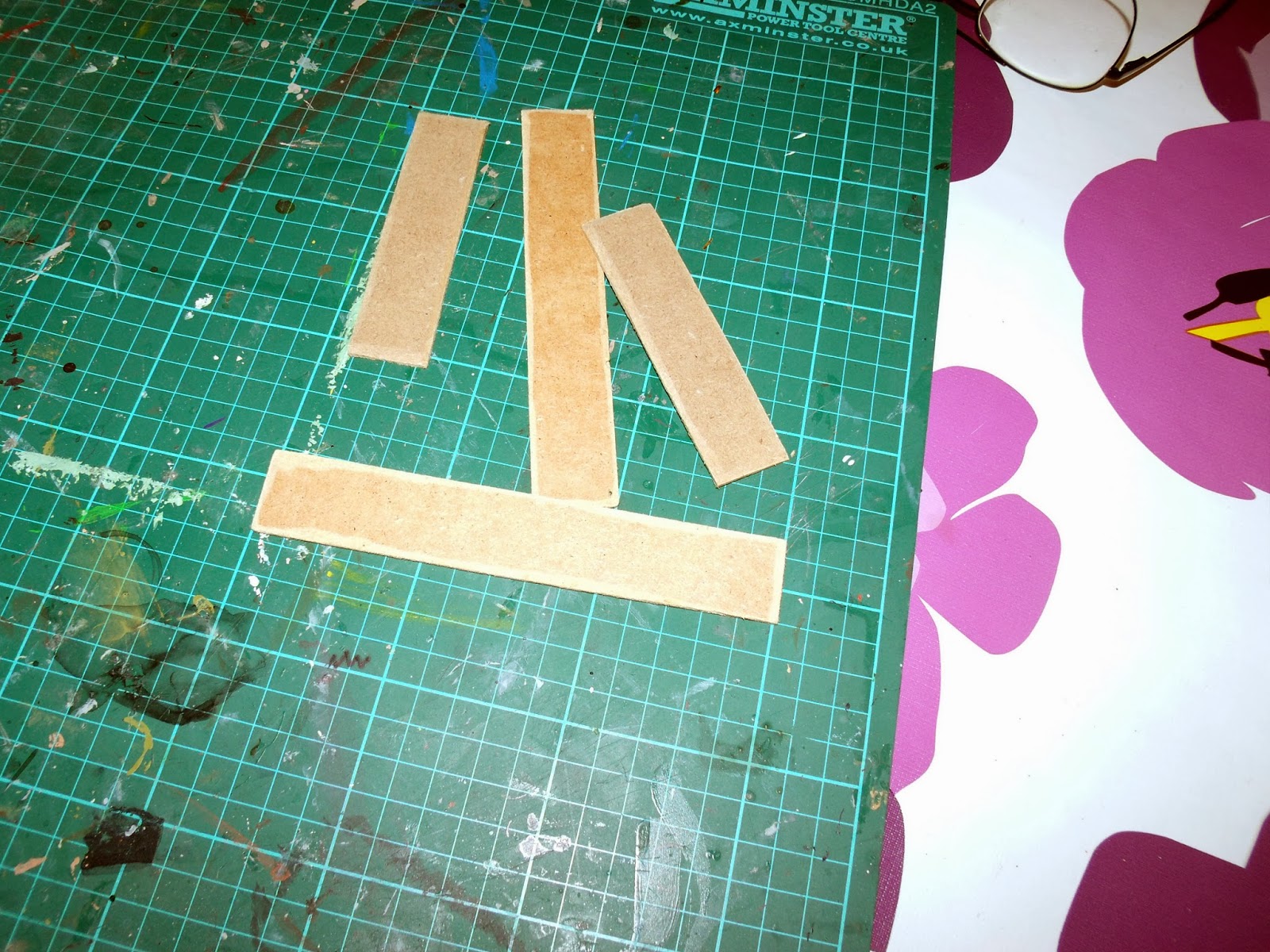 Then added a thin coat of caulk to give some semblance of unevenness. 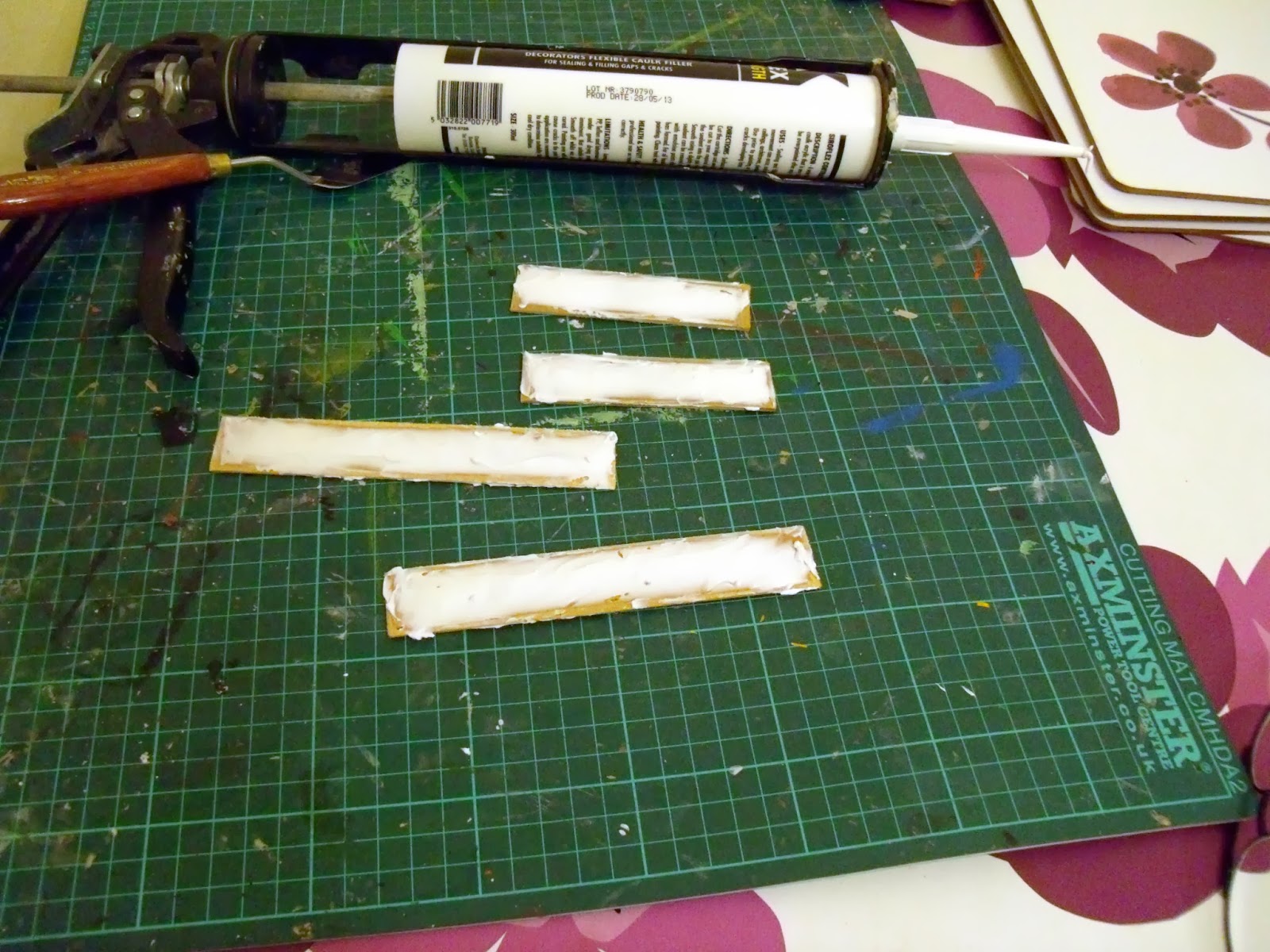 And gave them a coat of brown emulsion mixed with sand and PVA. 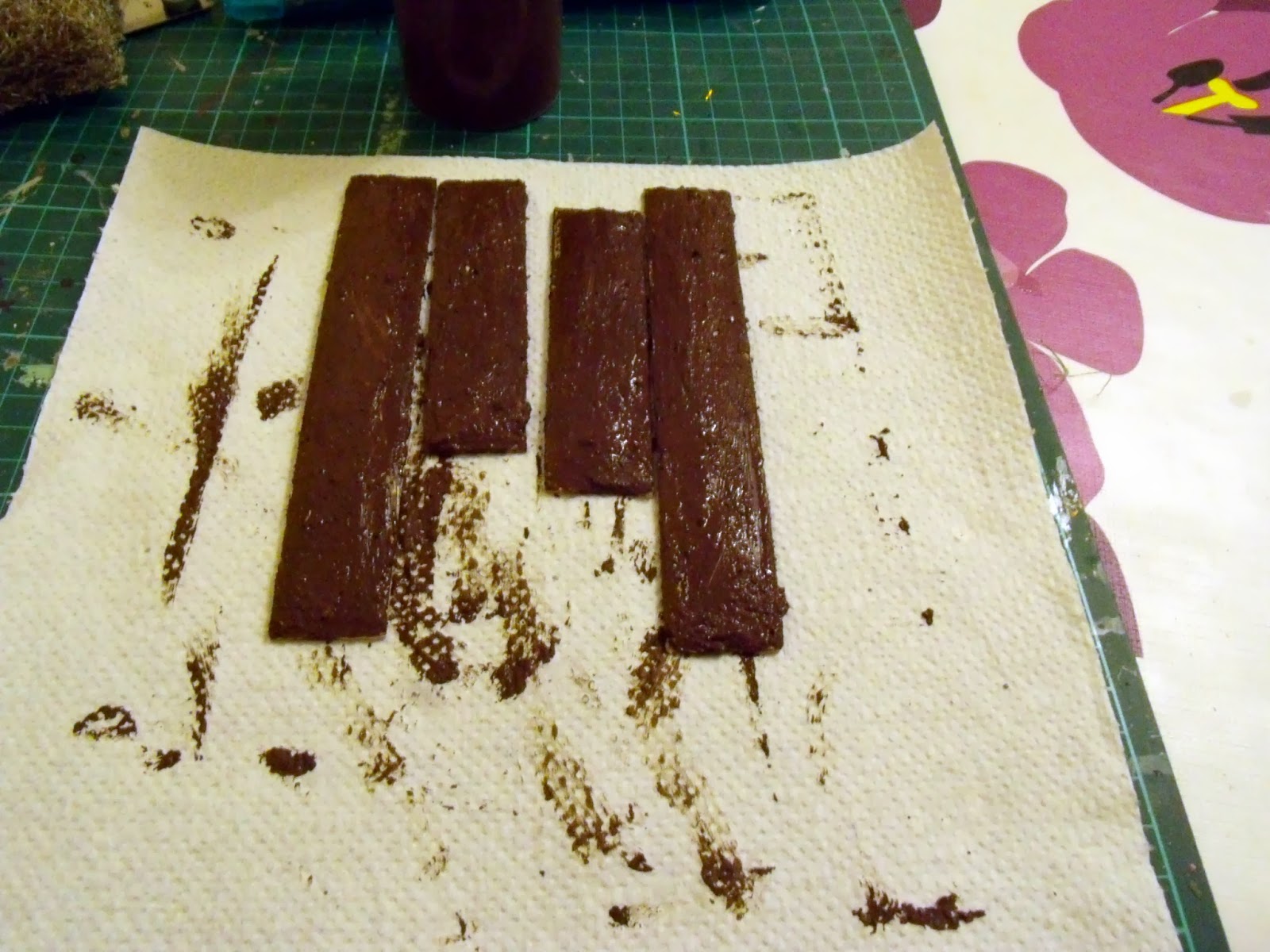 This is a block of rubberized horsehair (from the nice chaps at Treemendus), to form the body of the hedge sections. 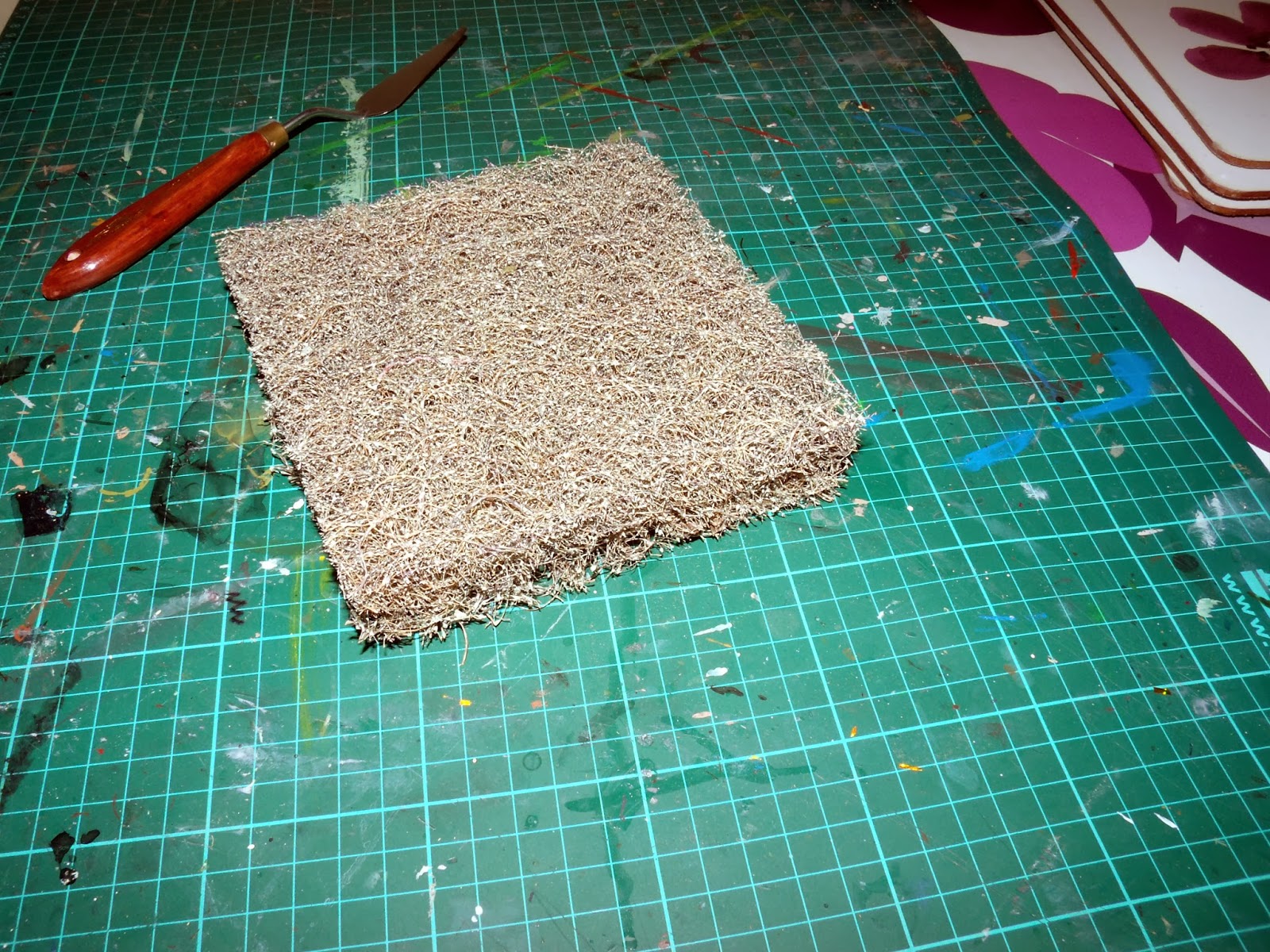 The next thing is to cut the horsehair to size. Having tried (very sharp) scissors and (ditto) scalpels of varying sizes, I can't really decide what's the best tool for this. They all seem to struggle! Anyway, strips need to be about 20-25mm high by 10-12mm thick. A hedge this size is proof against most things except tanks. You can leave the top flattish, or straggly and tapered, depending on how well-maintained you want the hedge to look. Glue the horsehair down. I use impact adhesive. In theory, you could use them like this for winter-set games. 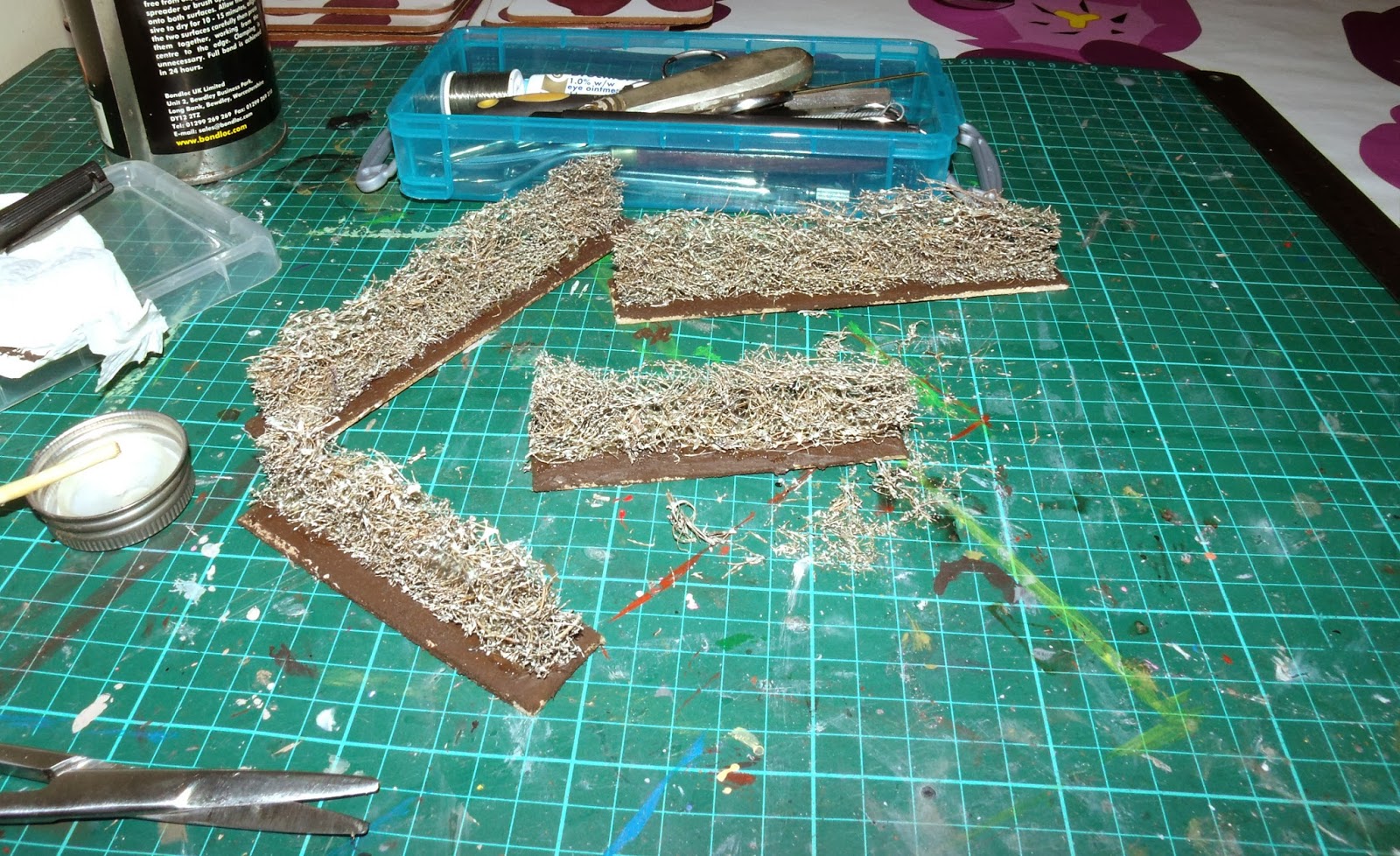 Once all is dry, give the hedge a spray with diluted PVA glue from an atomiser bottle. If you don't have one, get one. Three bits of advice: firstly, clean it out carefully after use as any glue in the nozzle will block it; secondly, don't pinch it from your daughter or wife as this may dramatically reduce your life expectancy, thirdly, filter what you spray through it - this will extend the life of your atomiser. Sprinkle with an appropriate hedgerow mix (mine comes from Treemendus, and I think is better that other brands I've tried) and allow to dry. Once dry, I repeated the process on two of the sections, to give a sense that some bits of the hedge are desner than others (as per reality!). Finally, I gave them another coat of dilute PVA to seal everything in, and allowed them to dry again. 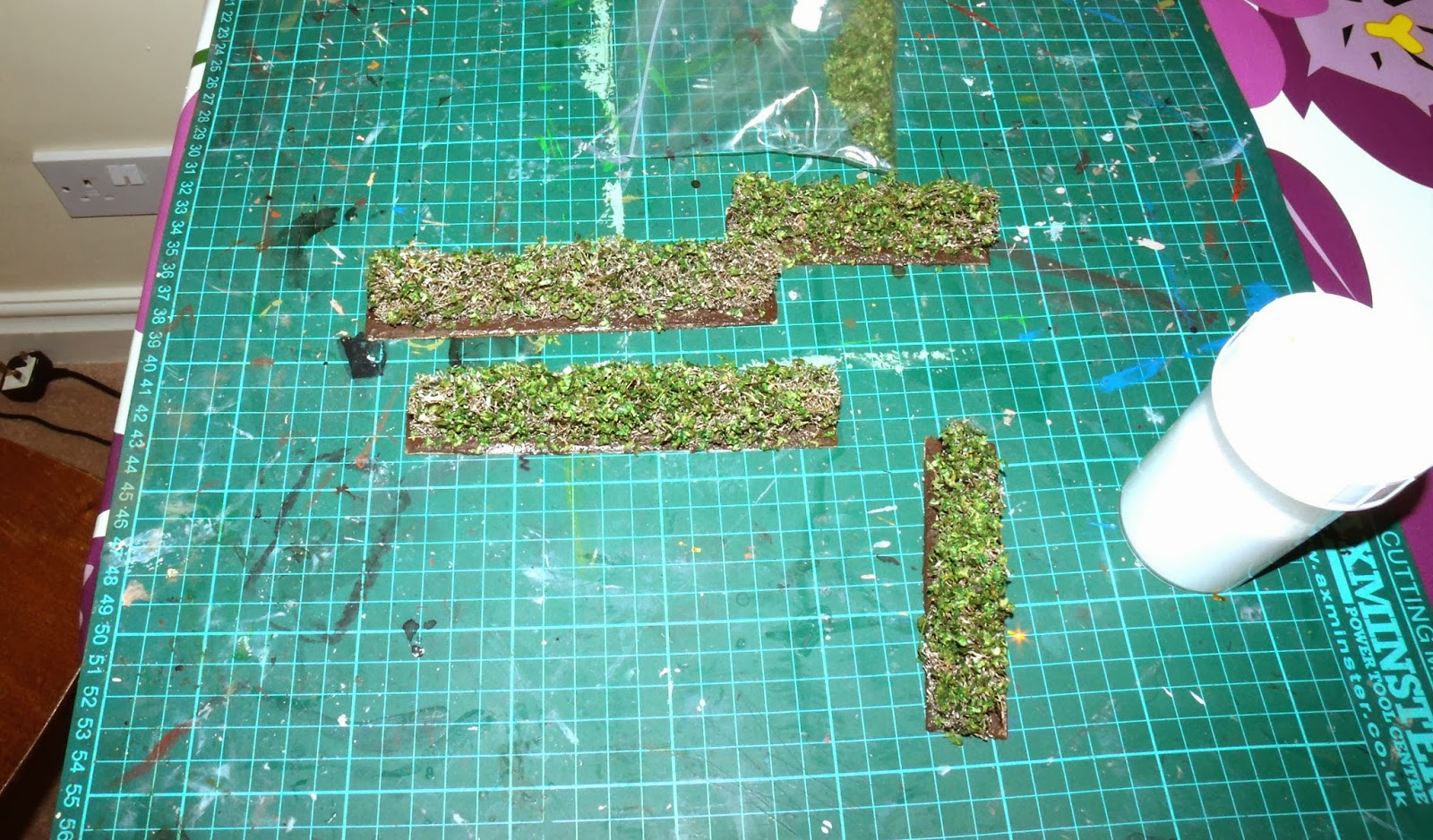 Carry out your normal approach to groundwork on the bases, and varnish to taste. My experience is that these hedge sections are significantly less robust than fencing, and so benefit from being stored carefully - i.e. not under a Sub-Roman church! 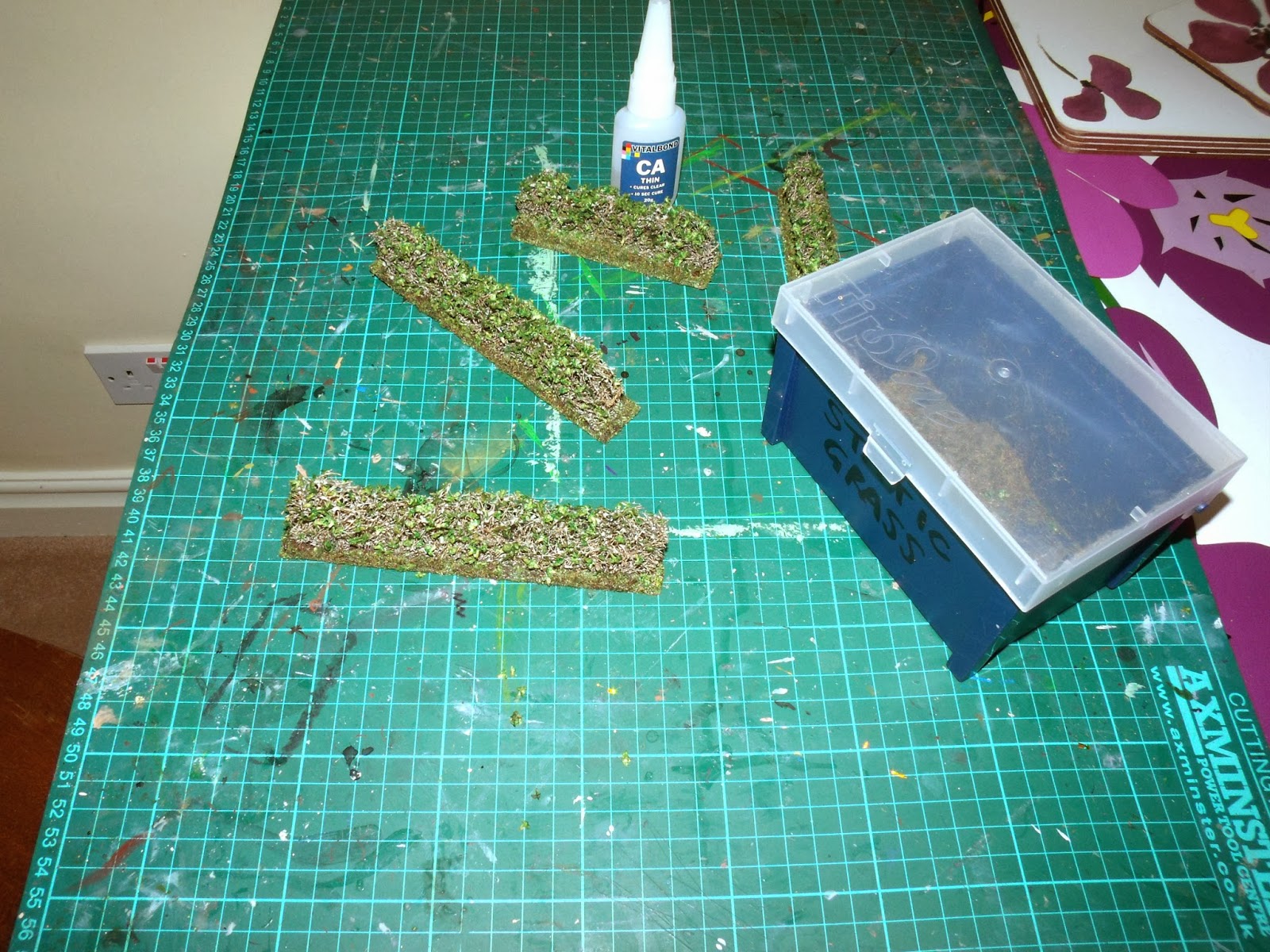 Here they are, in use. First with some Saxons carefully picking a way through. Carefully because you never know what might be the other side.


And here, with my ECW dragoons. The native environment of dragoons is, of course, lurking in place like this to make life uncomfortable for other people. This, therefore is a good test of the suitability of the hedge sections! 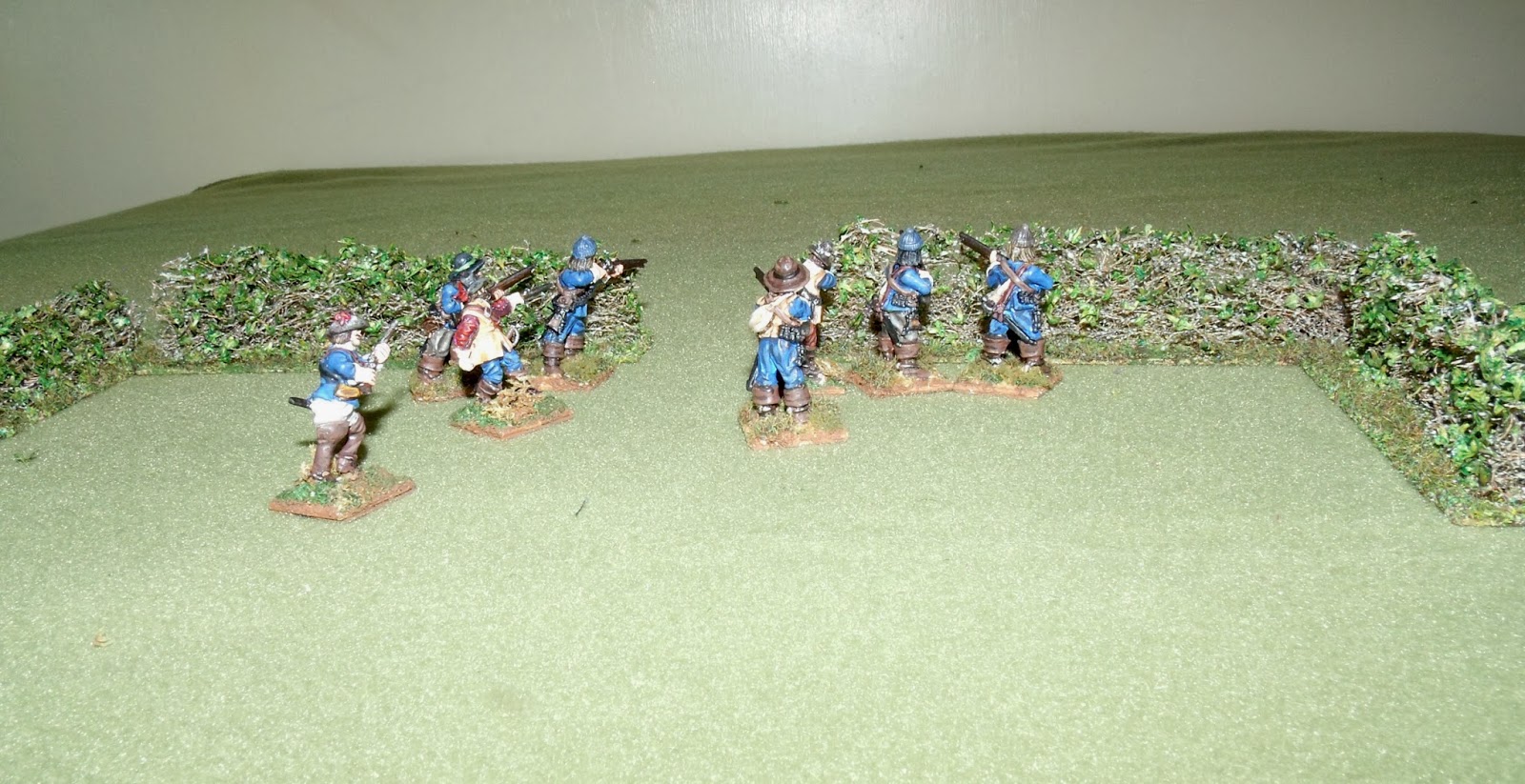 Ideal for an ambush!

Fortlet - Walls for a Watchtower

Way back when I built the Sub-Roman watchtower, I said it would be no problem to add some walls. I had forgotten about this. Playing various watchtower games in Dux Brit, it became clear that if you withdraw your force to a watchtower, unless there's some sort of wall, there actually isn't anywhere much to withdraw into.

This superb post by Emilio woke me up to the reality of what I needed. Also, his post shows a nice use of the walls as a standalone enclosure. On the grounds that there's nothing about it to not like, I built one.

Here's a lump of foam. Very cheap, somewhat cheerful, not really very nasty at all. 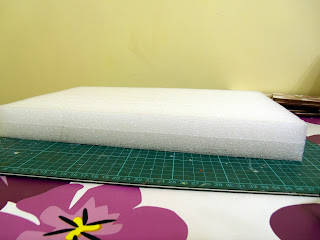 Never seen a start like this, have you? Not more than several times!

And here it is, measured and marked out. The dimensions of the wall are derived (fairly roughly) from the reconstructed turf rampart with a wooden pallisade built at Vindolanda. The top of the wall is designed to be wide enough to take a mini on a 20mm base, and for there to be a space wide enough for a mini to stand in between the botton of the rampart and the tower wall. 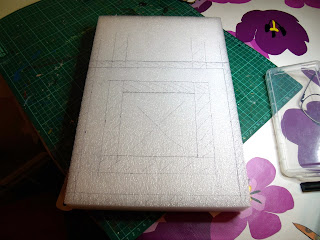 The magic of a Magic Marker!

Now, cut out. Turf walls like this are fairly ephemeral. Unless regularly repaired, they will rapidly degrade due to the effects of weather and animal action. What this means is that your structure can be fairly rough and ready, and it will be totally authentic. This one was intended to end up being a reasonably neat version, kept in good repair because the place is under constant threat. The result was, well, you'll see. 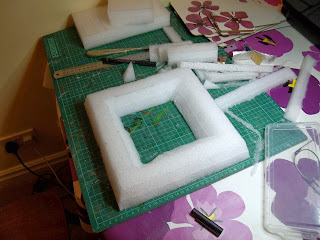 
Next, loads of posts, cut from balsa, get fitted on three sides. I deliberately didn't cut the entrance at this stage, to make use of the rigidity provided by keeping the structure intact, so I also left the posts off that side. The posts are pushed into pilot holes in the foam and fixed with a drop of CA glue. 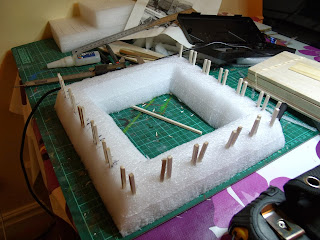 Think of the archaeology this lot would make!

I glued it to a base made of 3mm hardboard (cheap and somewhat nasty) with own-brand impact adhesive (cheap and VERY nasty!). The entranceway is cut wide enough to allow the smaller ox cart I built here to enter (to deliver food, weapons and, most importantly, beer for any garrison). Now before anyone laughs, there's a letter among those found at Vindolanda where a fort commander is pleading with the commissary for beer as his men are becoming deeply restless! At more or less the same time, I added the posts on the gateway side. 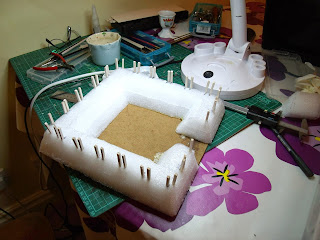 Base? Check. Gate? Check. What am I missing?

Now, here's a thing. On the Gask Ridge, up in Scotland, the Romans built a whole series of little watchtowers/fortlets like this (admittedly several centuries earlier) and several have been excavated. Where the site is well enough preserved for decent archaeology, the remains of the turf walls, banks and ditches and of postholes marking the corners of the tower can all be found. The entrances through the banks and walls are also pretty clear. What none of them seem to have is any evidence of postholes in the entrances, as would be needed to fit any sort of gate.

So, onward. Start cutting a couple of hundred short lengths of balsa, 3-6mm wide. Planks would have been sawn or riven out of whole trunks, in varying widths, and all used. 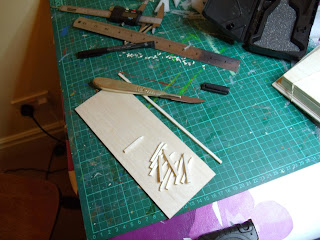 The first of very, very many...

And stick them all to the uprights. Best done in bursts, with breaks to do something else to regain your sanity. Ask me how I know... 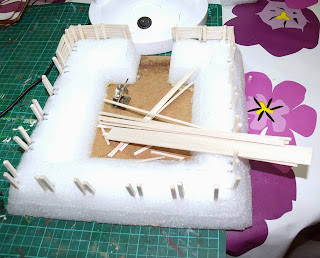 Raw materials stored ready for use...

Having eventually planked the whole wall (which only took two evenings...), I gave the woodwork (and then everything else) a coat of PVA to help bind all the wooden pieces together, and provide a key for the rest of the groundwork. Next thing is some details on the ground: basically, turf wall sections are not very resistant to foot traffic, and the areas where people go up onto the walls are going to become a quagmire in no time flat. 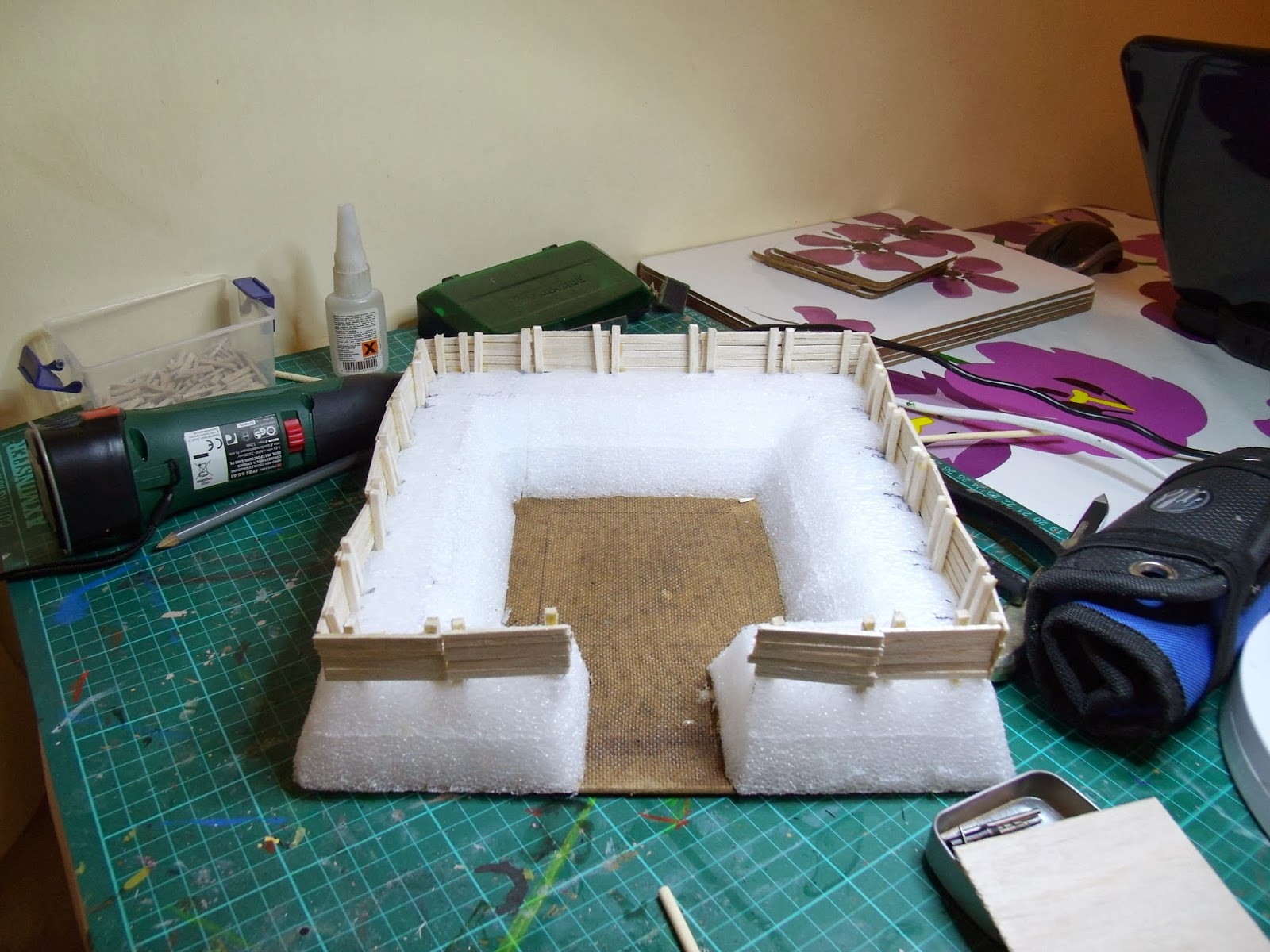 So, at the bottom of the wooden palisade go loads more short bits of balsa (another really interesting job!) laid on the ground, would prevent the garrison sinking up to their knees at the wrong moment. The corners, where planking is difficult, I added some hurdle sections, cast from  polymer clay. Making them (mould and item) is covered here.

I marked out in the centre for the location of the pre-existing tower, then started a horrible messy task: carefully covering all the foam and wood with a thin layer of painters' caulk. What a grotty job! The stuff gets everywhere.

I sprayed all the woodwork black, then went over the groundwork with a mix of brown emulsion, sand and PVA. Here it is ready for colour and details. 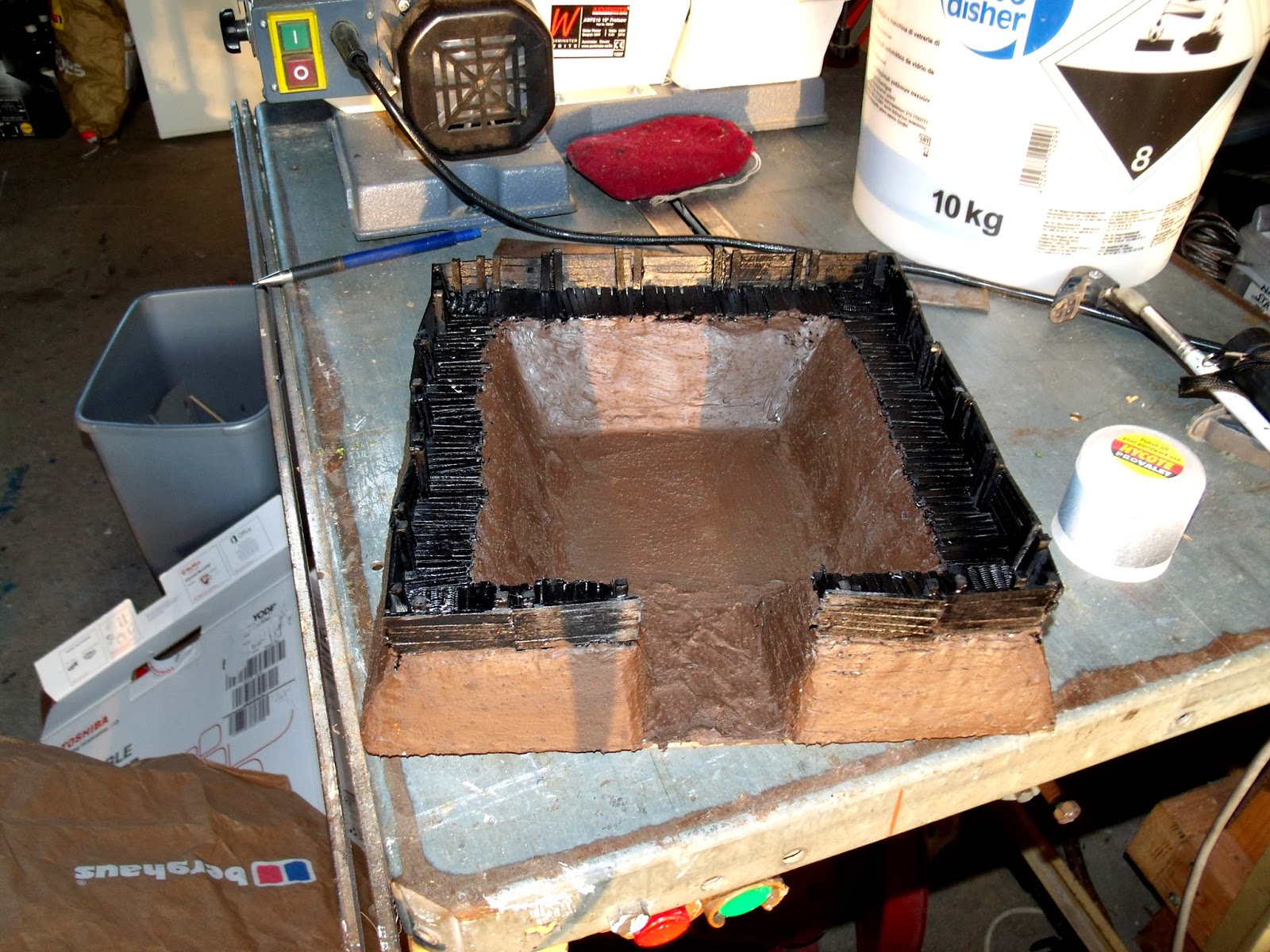 Finally, some accessories. The open gateway is a thing. One possibility is that the defenders made something like a cheval de frise to block the entrance. The basic concept was well known in Roman times, so Sub-Romans could certainly have one. And, of course, once it started to rot, it would have gone straight on the fire and left precisely no archaeological evidence! My cheval (chevaux) de frise was made up from bamboo skewer, and an old favourite of mine, headless brad nails. All of these were painted to represent weathered wood, except for the tips of the arms, which were darkened. Whether this represents fire-hardened points, horse muck to promote infection or a subtle combination of both I leave to your imagination. 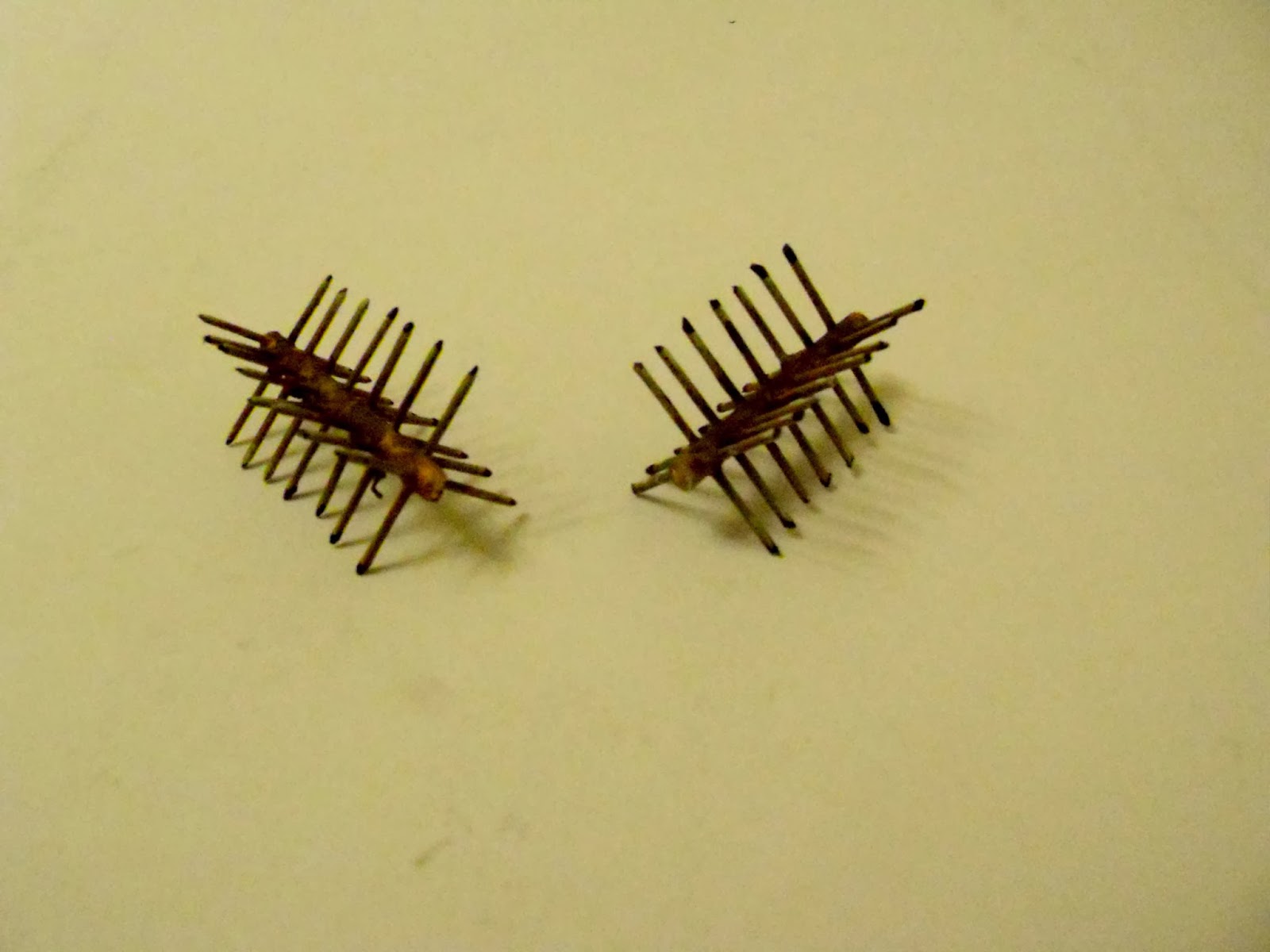 Two chevaux, one for this and a spare for the ECW!

Here's the finished article. A Warbases ladder got cut down to make two short pieces, which were glued on two sides of the internal bank. It would be a bit steep to climb in a hurry, especially if it's raining (and in England, what are the chances?). 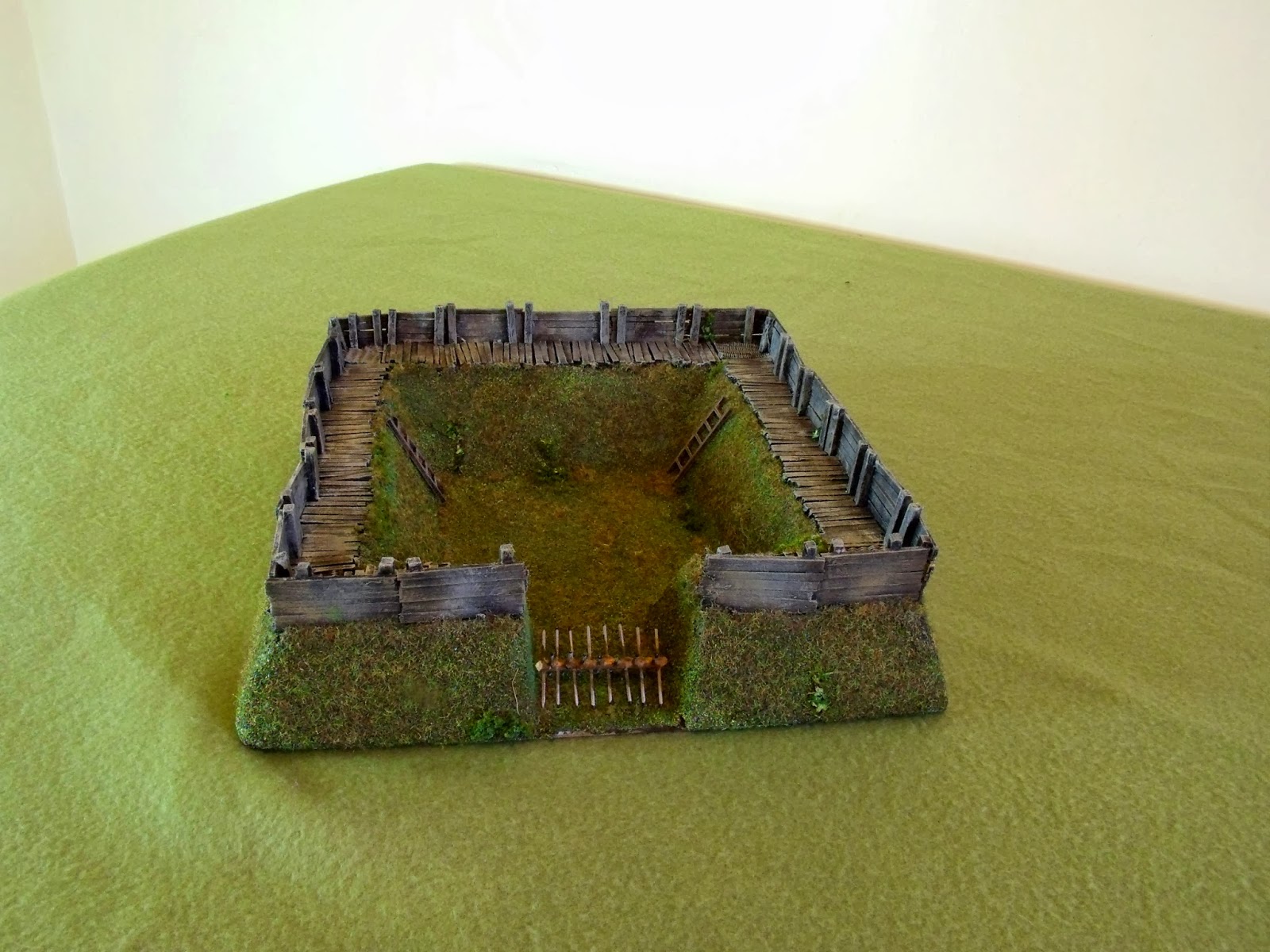 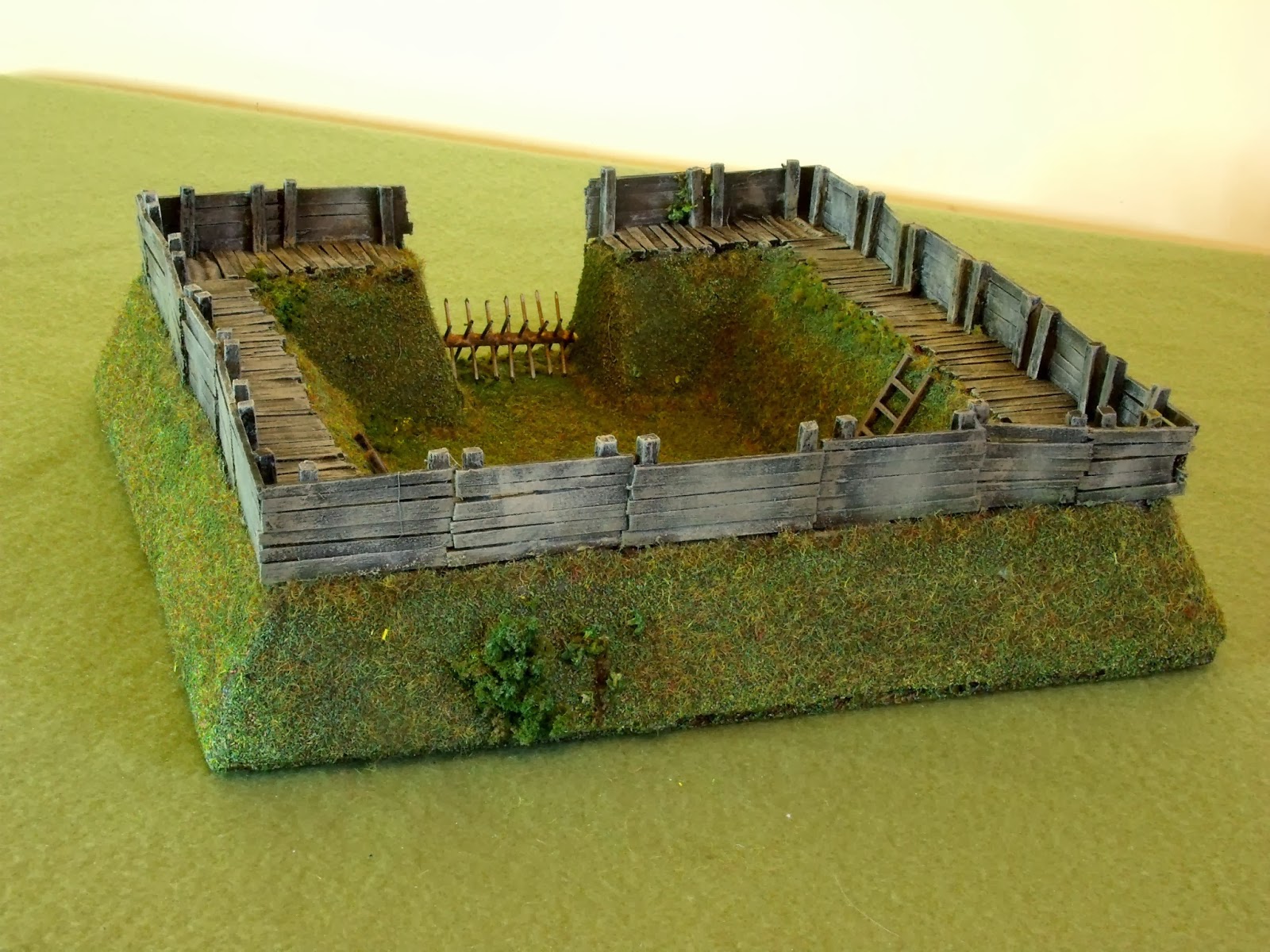 View through the gate

Here's the fortlet, with a garrison. It's a motley collection of levy, warriors, skirmishers and slingers, with one elite companion trying to keep order. Good luck with that. 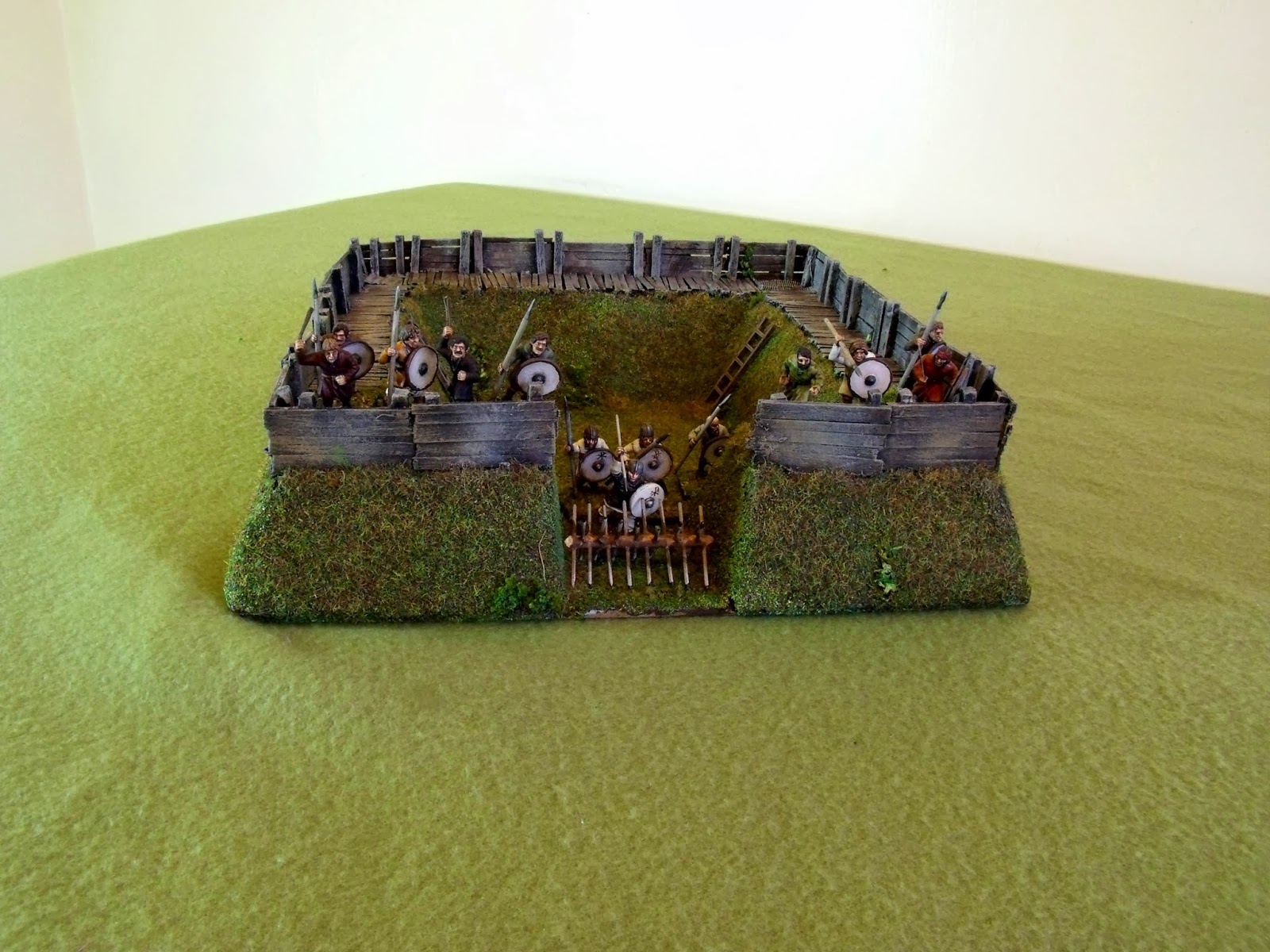 Tough nut to crack, this. 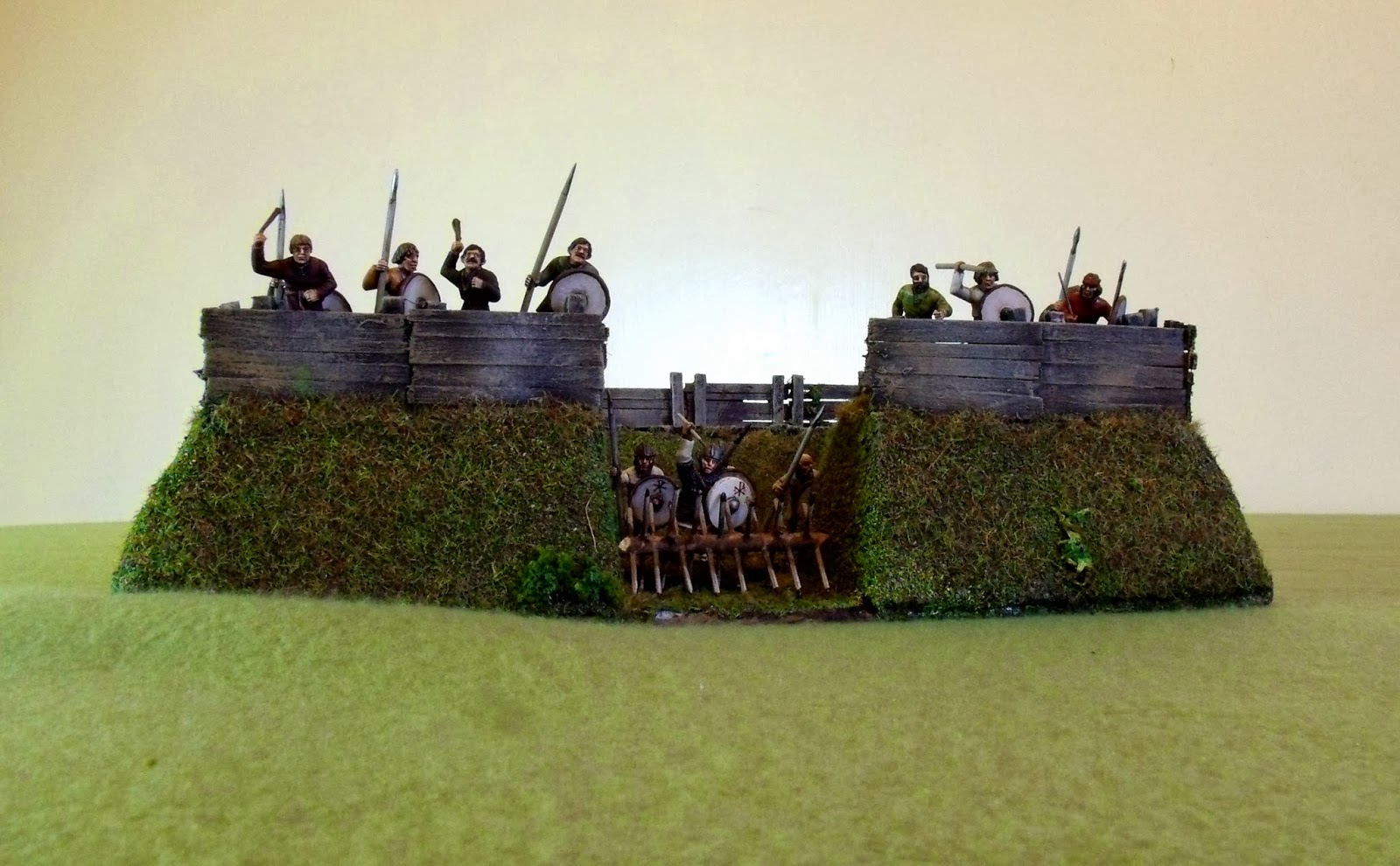 And again, with the tower in place. 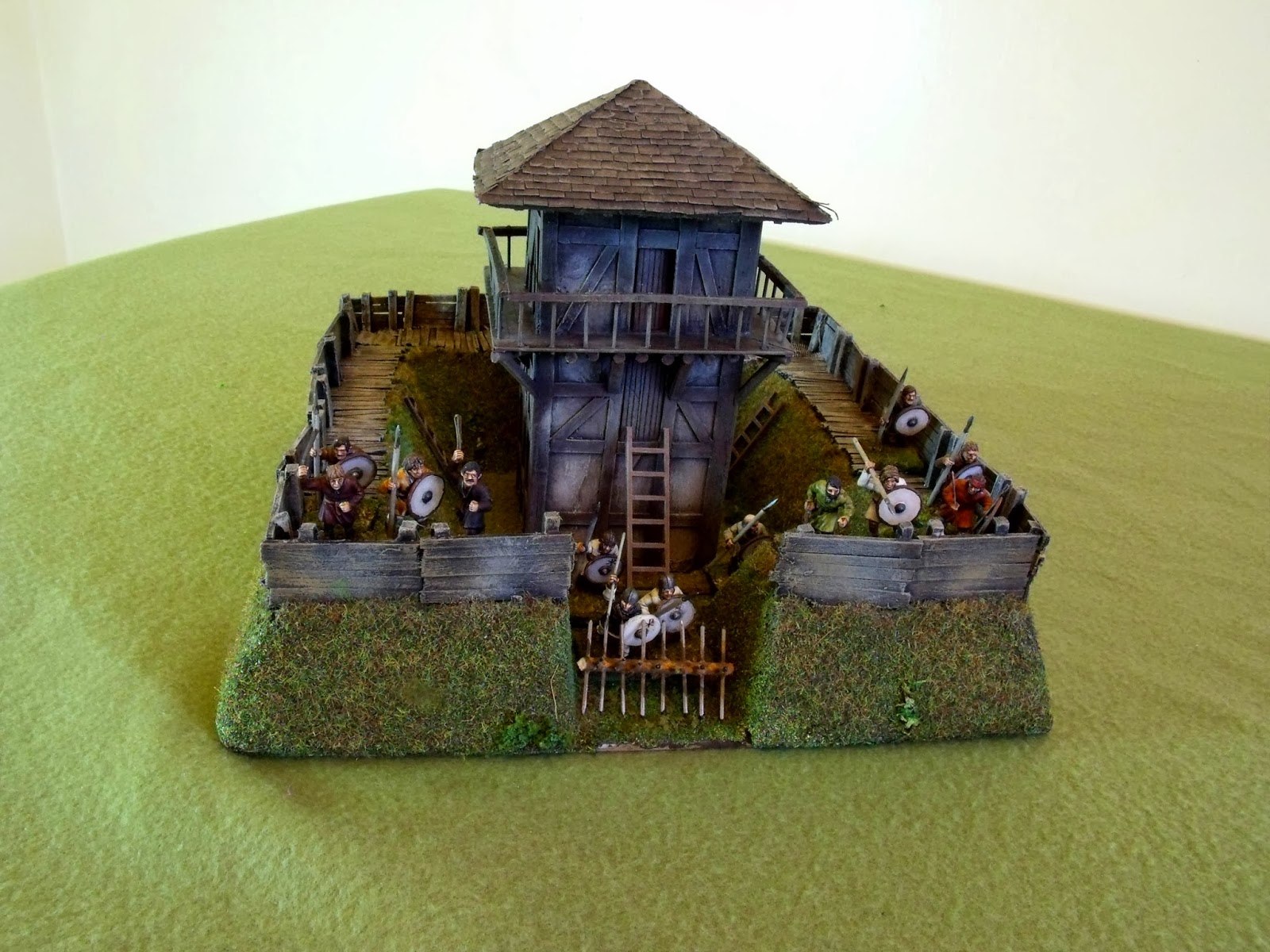 Looking down into the fort. 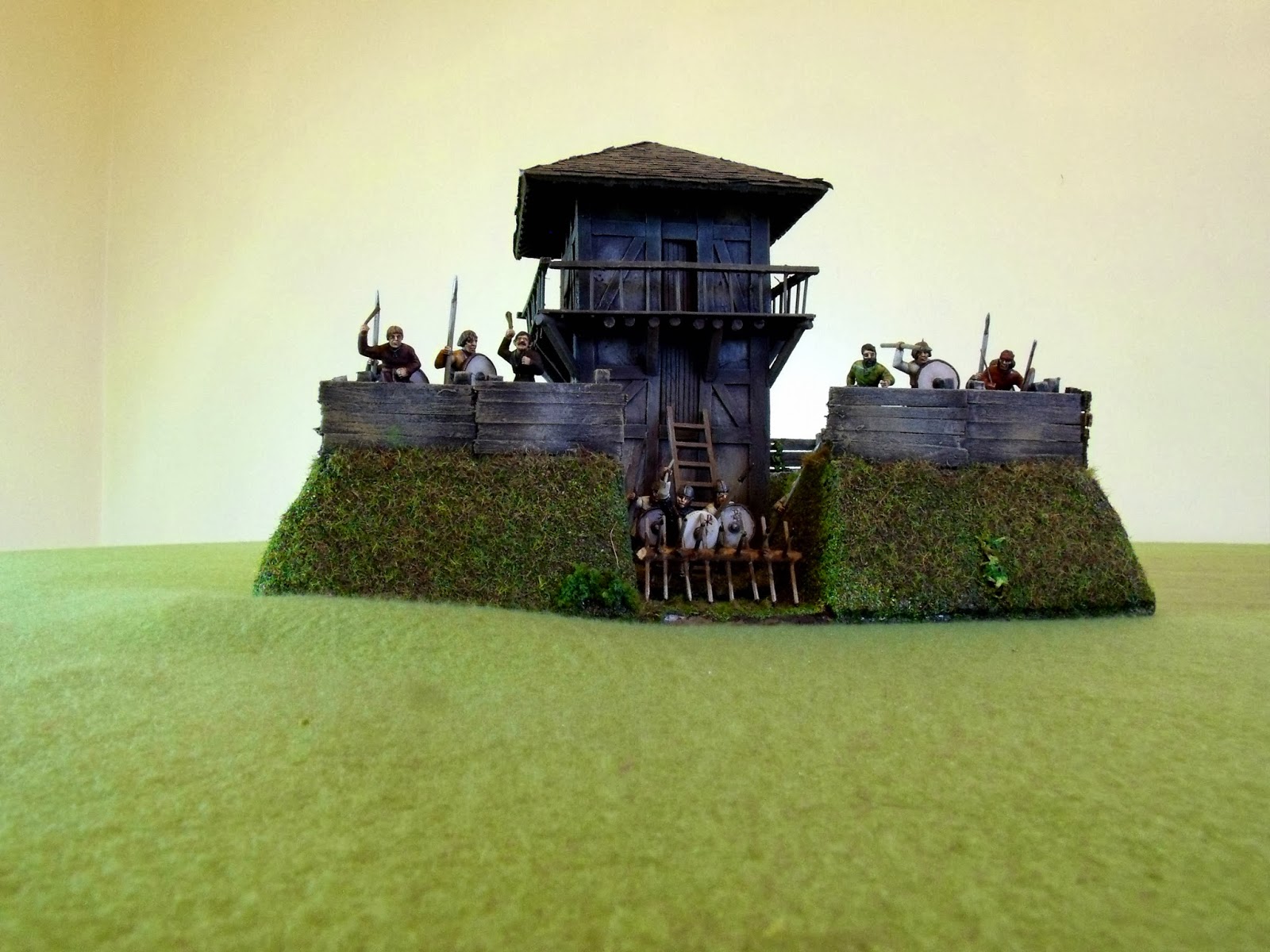 And another attackers' view. Like this one even less.