Finally, the characters and command for my Anglo-Saxon (Anglo-Danish) army.

These are all actually Vikings from Crusader Miniatures' Dark Ages single figure range. I would (and have) argued that as Anglo-Danes the difference in appearance is negligible, and besides that they are really nice minis.

As expected from Crusader, these are good, solid figures, strong looking and well animated. The appearance is of well-equipped, well-dressed men which nicely fits the role I have for them. No flash and minimal joint lines as per usual made pre-paint preparation a doddle. Paint was quick and simple and because these are the focal point of the army I splashed out on shield transfers from Little Big Men Studios. If you haven't tried these before, give them a go. They're very easy to use and the results speak for themselves. Steven Hales at LBMS is a really helpful guy and their mail order service is exemplary.

This specimen is the Eorl acting as leader. The Eorl of where varies (see below). Irrespective, most of the time he's going to be with the standard bearer, close to the huscarl unit slap bang in the front and centre of the army. 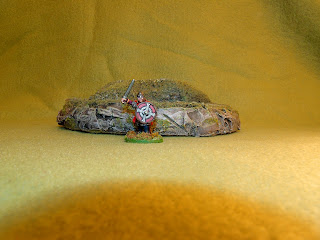 These two are Eolderman, and would be expected to be at the front, attached to whichever of the units of thegns or ceorls needs bolstering at that moment. 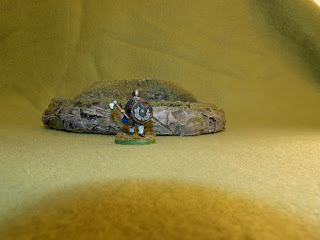 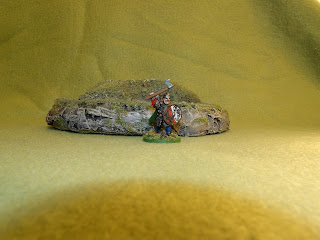 Lastly, the other Eolderman acting as army standard bearer. This is where the comment about Eorl of where exactly comes in. By a bit of jiggery-pokery and drilling down into the base of the figure, I can remove the standard and replace it. This way, I can ring the changes between the armies of Wessex (see above), Mercia and Kent, all of which have small but significant differences that give them a range of strengths and weaknesses, making it that bit more fun. Wessex is at the top, and here are the other two. 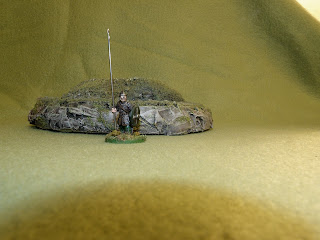 Gimme me flag back!

So here they are as Mercians, with the eagle and saltire. 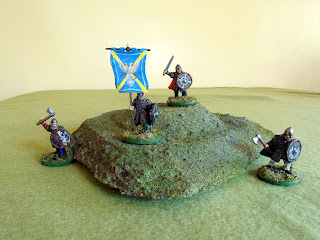 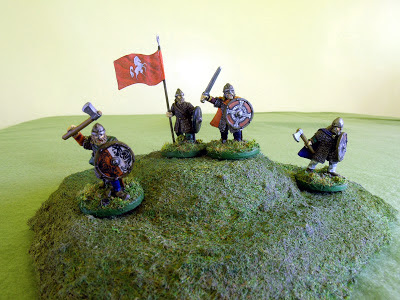 Finally, here's a couple of group shots, from other angles, just for completeness. 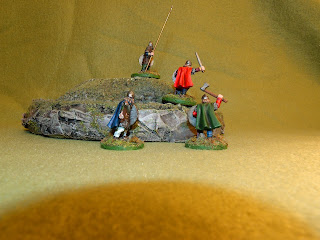 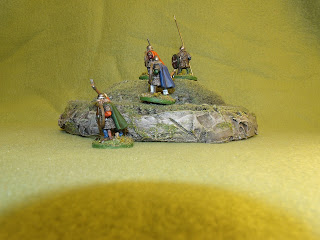 What it says in the title. I finished these just before the computer died and so couldn't post them.

These come as a pack of eight, with shields but no weapons. The website shows four pose options, but the pack was rather a disappointment in that I got four of the same pose! Since that sort of uniformity looks so wrong in a rabble like this it was out with saw, scalpel and greenstuff to change arm positions, hair and add a hood to one. I added hand weapons as well, a mix of swords (home cast scabbards fixed in place and embellished with greenstuff), axes (ex-Gripping Beast) and daggers (sculpted in situ with greenstuff).

The javelins are brass wire hammered and ground to shape (the pack doesn't include spears), and the shields are a mix of the large Crusader examples from the pack plus spares of various shapes and sizes taken from Black Tree, Newline and Gripping Beast figures undergoing restoration. I'm not unhappy with the end result.

Well, here they are. The first unit of my Pictish army to take to the table. 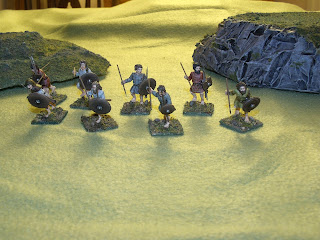 At long last, some actual progress!

I've been working on these for a little while as part of my Anglo-Saxon command and characters. These are banners for three of the old Saxon kingdoms / earldoms.

At the outset I suppose I should point out that these make no pretence of being historically accurate in their actual execution. The period in question predates true formal heraldry by rough a couple of centuries at least (depending where you put your timepoints exactly), so I'm guilty of anachronism and artistic licence at least!

Anyway, on with the artwork. I used PhotoShop to do the shadows and highlights. Since my old Iwata bought the farm I no longer have an airbrush that's up to that kind of work.

First up is the gold wyvern on red of the Earls of Wessex. This is W&N ink on Bristol board. Whilst it appears there's no evidence that the wyvern was specifically identified with Wessex at the time, its actual existence and use is definitely attested to.

Second we have the white horse on a red field, the Kentish Invicta. There's a supposition that this is derived from the banner carried by Horsa the Jute. Ink and watercolour on Bristol board. 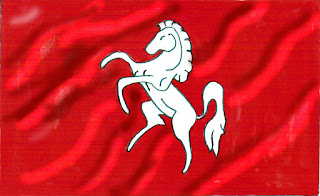 Third and last we have a flag for the earls of Mercia. The cross of Saint Alban, yellow on blue, has a long association with Mercia, and the silver double-headed eagle was actually attributed to Leofric of Mercia in the period in question. The superimposing of the two is all my own dirty work I'm afraid. This is acrylic and ink on Bristol board. 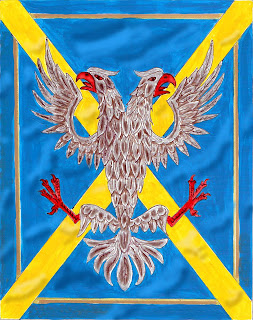 Please feel free to copy for personal use, if you feel that the ahistoric status of these banners is something you can swallow! If not, well, the rest of my army is as historically accurate as I can make it, so as Max Malini said: "Honest to goodness, I only cheat a little!"

Leslie Alcock's "Arthur's Britain" and "By South Cadbury That Is Camelot" and "Camelot and the Vision of Albion" by Geoffrey Ashe et al.

Note to self: write out one hundred times "I must NOT start modelling the South Cadbury fortification reconstructions"...
Posted by Mitch K at 12:01 No comments:

In complete contrast to my Anglo-Saxon army, here comes something completely different.

If this army is labelled as Pictish, it would be suited as such for up until about AD900. After this point, it becomes an army of the Kingdom of Alba. The differences in appearence, equipment and so on would have been very small, and in game terms it makes very little difference either.

The strengths and weaknesses of this army are pretty much the opposite of the Anglo-Saxons. Where one is weak, the other is strong.

One great strength of a Pictish / Alban army is its mobility. Nearly all troops have a base movement of 5, so skirmishers can absolutely roar across the table and be in places the enemy might want to be before they're out of the starting blocks. This is amplified if you take the option of using cavalry. I have, as the temptation is too great to avoid. A largeish force of light horse, equipped with javelins and hand weapons, can run rings around ponderous footsoldiers, and will make mincemeat of any unit that breaks.

Another advantage is that this army tends ot have a lot of missile troops. Although javelins predominate, short bows and even crossbows (during the Pictish period) mean that an attacker potentially has to trudge forward through a hail of fire before ever getting to grips with an army that can go on evading him all day long.

Finally, troops are cheap. You can place enough men into the field to turn the game table black. The downside of this of course is that it isn't a cheap army in monetary terms! I was eagerly awaiting Gripping Beast's plastic generic Dark Ages troops, but found that Miniature Design Studio troops will get round this problem.

The biggest single disadvantage is the parlously low Leadership rating of most of the troops. Although you can put a huge army into the field, it's a swine of a job keeping them there! You need to go out of your way to put characters with units and / or use every single bit of rank advantage you can. Fighting a mobile battle, using missile fire and hit and run tactics helps, but if a unit of spear gets into a tussle with a group of Saxon Thegns, there's pretty much only one result.

The other great disadvantage is a dearth of well-armoured infantry. There is basically a single unit of armoured troops (the Toisech) allowed to you in the core units. If you want to, or can afford to, or are willing to swap the cavalry for them, you can add some heavy infantry through the Dogs of War options available.

Most troop types only have bucklers for protection, so against an enemy with missile fire, you can find your large army evaporates very quickly...

As a Pictish army, the spearmen can be designated as pikemen. Whilst this provides an advantage in that they are pretty much guaranteed to strike first, it's worth remembering that pikes and bucklers are a poor answer to heavy infantry. This disappears with the changeover to Alban, along with the crossbow (unfortunately).
Posted by Mitch K at 09:51 No comments:

Guess who's got a new computer? Plenty to do getting it ready and fully up to speed, but hopefully should be back to normal in a few days!
Posted by Mitch K at 22:42 1 comment: