One thing that Anglo-Saxon armies are generally pretty poorly off for is missile troops. I've read various statements that purport to confirm that this was a general thing, or that the absence of missile troops in a particular battle was down to a specific situation and wasn't usually the case.

Whichever side you fall on, in pure game terms, I feel the lack! My original DBA army had no missile troops at all, the one stand of slingers counting as Ps and therefore skirmishers. WAB, however, allows the use of Geburs with slings (or indeed bows), so I decided I'd avail myself of some. This unit of ten is probably enough to distract an enemy, possibly upset a charging force or help to suppress hostile missile troops, and that's about not half bad for a unit that only costs a measly forty points.

Eight of the slingers are Crusader Miniatures, from the Dark Ages range, whilst the other two (the right hand figure in the front rank and the second from the right in the rear rank) are Black Tree Design.

The Crusader figures were nicely moulded, with essentially no flash and limited mould lines. They are nicely animated and nicely proportioned, and they take paint a treat. I would highly recommend them.

If I have any niggles, it is that all eight figures are quite similar in pose, and all wear phrygian-style caps. This presents too much uniformity for me, so I re-sculpted two with bare heads (2nd from the right in the front row, and the bald geezer in the back row). Also, two of the men have swords, which is a bit extravagant for the members of the lowest class of freemen.

The Black Tree figures are beautiful, no flash, easy to work and lovely to paint. Posts on TMP suggest that the issues with delivery may be improving, which can't be bad. 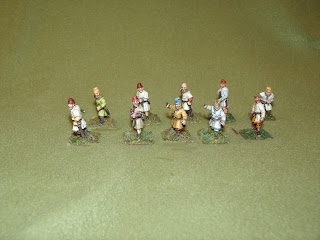 A slightly closer shot reinforces the fact that the two ranges mix absolutely seamlessly. This would be the view a Pictish horseman would get as he galloped into a hail of stones the size of a goose egg. Ouch! 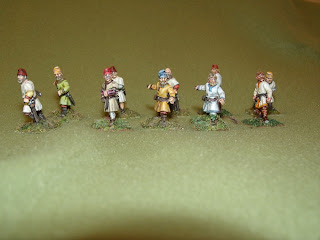