I also got the Perry Miniatures 9lb Falcon at Wapnetak in York. This is such a sweet little kit! With no flash and minimal mould lines, preparation took no time at all.
The cannon measures out “right”, although given that the things were all bespoke, true scale accuracy is probably not especially meaningful. The moulded woodgrain looks lovely, and takes paint a treat, but there’s no way you can say this is even close to “scale” – raised to full size this would be beyond rough!
Not withstanding that, the cannon more or less assembles itself, going together with just a touch of epoxy, and no filler anywhere. The figures are all equally nice – lovely proportions and anatomy, good posing and they take paint wonderfully well. I made no effort to portray any sense of uniformity among the crew, simply trying to represent a set of four industrious fellows, well turned out in civilian garb. The whole thing makes a beautiful little vignette, with three of the crew straining to manoeuvre the cannon whilst the forth goes back and forth like a fiddler’s elbow to shift all of the other detritus that will be needed to get into action. This brings me to the only minor niggle – the rammer staff and scoop carried by one of the crew is moulded in a curve against the figure’s shoulder – I couldn’t straighten this and although it doesn’t detract too much from the whole I was a tiny bit disappointed. 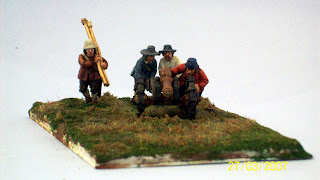 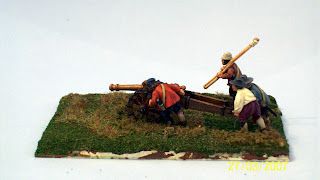 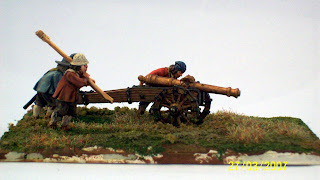 The set is based according to the conventions in the Victory Without Quarter rules, which since they group artillery on a large, single base (as opposed to separated to allow figure removal, as in e.g. 1644), suits a group like this. The basing is temporary at present - hence the slightly unfinished edges. If I decide to leave it as is, I'll tidy it up. Another possibility is to re-base the set in some sort of fortification. We shall see.
Posted by Mitch K at 13:18