The Furie of the Ordonance!

Here are the finished guns! Two small “battalion” guns and a larger piece.
I left two of the gun carriages as bare wood, the larger one with an unpainted iron barrel 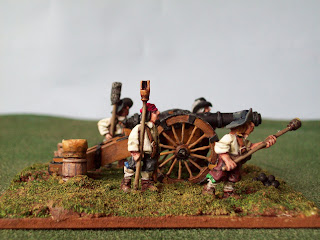 and one of the smaller guns in bronze. 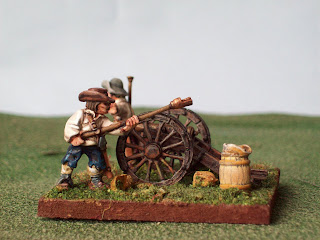 The other small gun was painted in red with a black-painted barrel. A follower pointed out that red carriages were more commonly associated with Parliamentary forces, which given my army is meant to be Royalist might be a problem! 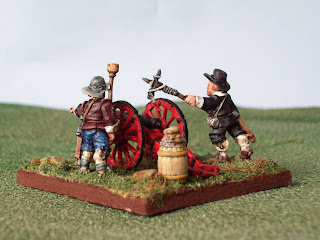 A bit of thinking found me a way out. Red paint would  have been fairly generic – red lead was commonly available, and popular as it’s a great preservative (unless you eat it…). Also, cannons were rare and highly desirable, and no general in his right senses would turn down a captured gun simply because he didn’t like the colour! 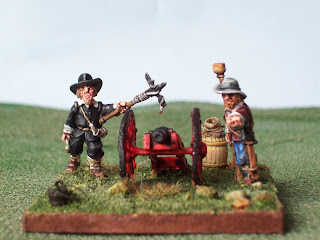 The figures are from 1st Corps, from their Thirty Years War range. These are one pack of the firing crew and one pack of loading crew, although mixed between the guns. There was no flash, limted joint lines to clean up and they painted a treat. 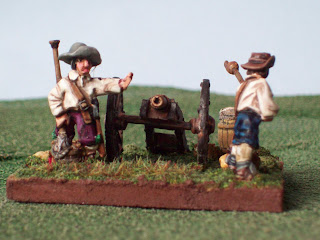 These are lovely, characterful figures. There are a couple of well-dressed master gunners, and a selection of matroses and labourers who seem to range from the serious and capable to some who look like they need to be told to come in out of the rain. The powder loader on the left at the back here is a perfect example of the latter.  I loved the variety, and would recommend them without reservation. 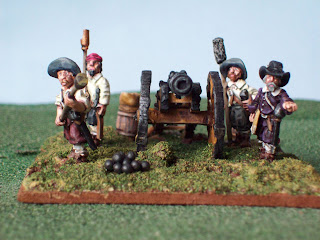 The accessories (budge barrels, buckets) are Amati model boat fittings, from Cornwall Model Boats. A bit of green stuff and some flytying thread made these useful little pieces into exactly what I wanted. The cannonballs on the large gun are angler’s split shot. These actually scale out as fourteen pound cannonballs, based on the magic of arithmetic. This fits perfectly with Reiver's description of the gun as a 12-24lb.
Here are all three guns as a single battery, ready to batter a slogging infantry regiment, or make mincemeat of a dashing cavalry force with canister. 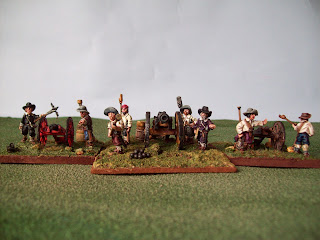