A figure of eight house is considered to represent a slightly later phase in building design compared with the wheelhouse, but there seems to be evidence of contemporary occupation on some sites, so making one of each and having them side by side on the gaming table didn't ought to ruffle any but the most pedantic of feathers.

The term "figure of eight" derives from the two near-circular rooms joined together under a single roof - "jelly baby house" is sometimes used in less reverent sources. The single roof is considered to be more likely since a split pitched structure would leave a valley between the two chamber roofs where water might collect.

This breathtaking reconstruction at Bostadh on the island of Great Bernera in the Hebrides is the basis of my plan, again with input from Professor Harding. Based on the dimensions from Harding, the structure would end up about 200mm long, which was a bit too big. So, I scaled it down, whilst trying to keep the proportions the same. For those of a certain age, this is the "Barratt Box" version...

It's an interesting question whether the best way to do this is to produce a wall stucture, fix this onto / into the ground base, and set the roof on top of it, or carve the whole thing en bloc. Whichever way you go, the key thing is that the angle of the roof is pretty much constant along the whole length of the ridge. This means that the ridge slopes downward from the doorway end. Based on the various photographs of the reconstruction, I came up with a figure of about 40 degrees. This is shallower that might be seen on many buildings. There's a reason for this: a lot of these dwellings are / were in the west of Scotland, in coastal areas. Here heavy prolonged snow, which will overload the roof when it lays on it, is far less common than in the Highlands. However, howling Atlantic gales are very common, and the lower pitch offers a better chance of the roof actually staying in place! You need to make yourself a construction drawing and actually measure or calculate the true value. 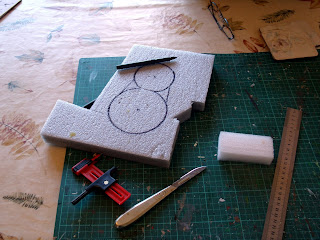 Waste foam base, marked out.

I went down the road of taking individual bits and sticking them together, as per my normal practice. Not very original, perhaps, but it works for me. 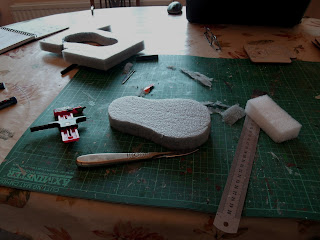 I cut out the base using a circle cutter to mark out, followed by a big knife. After cutting a doorway in, I followed the Wheelhouse scheme as far as the wall structure went - Slater's textured plastic card.

The roof is the key part of the whole thing. There's very little overhang over the walls, given that the rafters bed into the centre of the walls (see the photograph in Professor Harding's article). I took a big hefty block of waste packaging foam, and went from there. 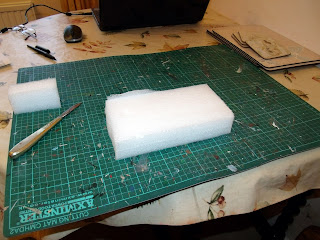 Using the base as a guide, I marked out the outlines of the roof. The walls, complete with Slater's card stonework are here. The Greenstuff is to merge in the joints, as per the wheelhouse. 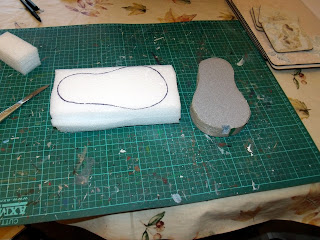 Next, I carved away all the bits that aren't involved with making the roof the right shape. A sliding bevel to guide the roof angle, and a couple of cocktail sticks to mark the high points of the roof help. The one at the lower end was measured to provide a reference for the apex height. 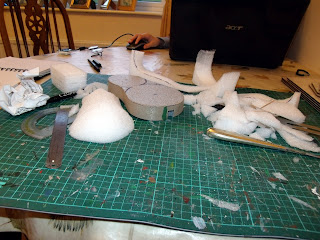 It was then installed, using a good coat of Evo-Stik. 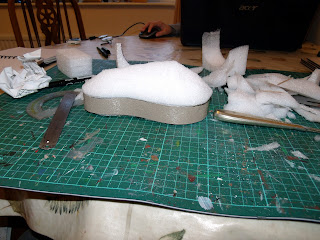 The base is MDF, with foam sheet glued down, and a cutout for the building to sit in. It sounds obvious, but use the building itself to mark this. However, wait until you have applied and stone effect, as this can change the shape and make life hard if you don't. 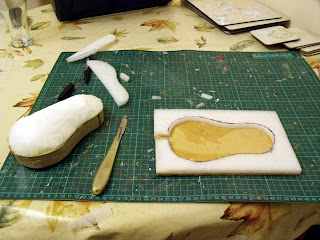 I put in the same sort of slope, steps and revetting from ground level down to the door as I did with the wheelhouse. The doorway  was cut out, and a door (cut from balsa with detail engraved) was installed as it's easier at this stage. I'll tidy up the edge of steps at some point, and add a lintel from plastic card. 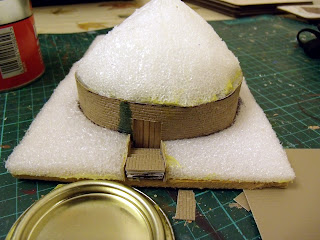 The base needs a bit of modelling to provide a natural look (which is easy), and the addition of the low wall visible in the reconstruction (which is harder). This could be stone, like the one in the Hebrides, or turf, which is easier to make, or a combination thereof. Take your choice... I plumped for making a turf wall made from the offcuts left over from cutting out the base. Here's the wall installed. The pins are temporary while the Evo-Stik goes off. The wall then gets trimmed and shaped a bit to make it a bit more even looking. 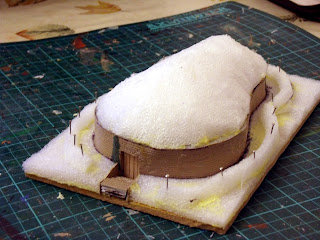 The thatch  is towelling, fixed with copious amounts of Evo-Stik, trimmed to size once with a very sharp knife once the glue has dried, then wetted down with PVA. The roof is then accented with a web of "ropes" made from 3/0 flytying thread over it. These ropes have rocks (larger bits from the sharp sand bag) "tied" (actually superglued) to the ends to hold down the thatch. This is still normal in the Western Isles. Doing these ropes is laborious and best does in stages. Who am I trying to kid? Laborious doesn't begin to describe it! 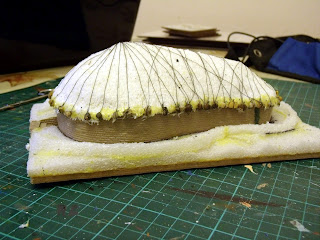 Thatch  done and roped down

Groundwork is the usual sharp sand over PVA. Once this was dry I gave the whole thing a good coat of panzer grey emulsion followed by flock in the places that need it. This included a patch or three on the roof, where weed seeds in the heather thatch have taken hold!

Next, I gave the entire structure a wash with burnt umber acrylic, well thinned and with some flow improver added. After this is dry, it's a case of drybrushing with as many shades as you can manage without going insane. I lightly retouched the ropes around the rocks with a little more wash at the end, to re-emphasise the contrast here, which was a bit lost during the drybrushing. After a coat of Pledge floor wax for protection, I sprayed two coats of Galleria matt varnish. 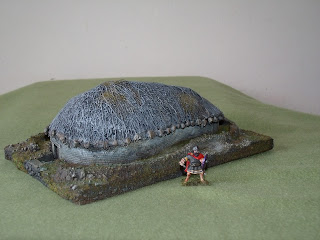 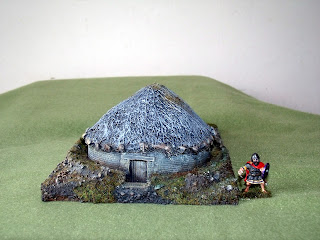 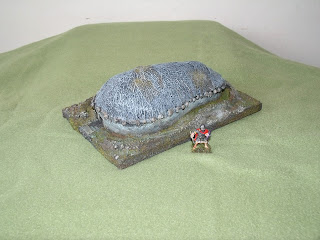 View coming down the mountain

Here's a couple of views, with a Black Tree Design Pictish warrior for scale. I added the mail and helmet, to provide some heavy troop support to the usual collection of woefully under-equipped light infantry.