All Along The Watchtower (Part 2)... (Sub-Roman Buildings 2)


As I said in the first post about this build, I'm not really capable of leaving well enough alone. I thought by not building an interior, I was doing OK, and starting to get this in check. Then, I spolt it all by going on further with the exterior. None of this extra work is vital, but I think it adds something to the overall feel of the build.

I added supporting trusses for the floor joists. The reconstructions seem to suggest that every joist doesn't need a truss, so I added a selected number, including either side of the doors and the corners. You could use the skewers as is, or squared off with a plane, or balsa strip like I did. The trusses will need angle cuts at each end, but also coped cuts. All of them need a round cut on one end to allow it to wrap around the horizontal joist, and the corner trusses need a square-sided cut to wrap around the corner of the building. I made the rounded cope cuts with a coarse round file. It's more or less impossible to batch make these trusses. The slight differences mean each one has to be made and fitted individually. This makes it another one of those jobs best done a bit at a time...

Anyway, here it is with the trusses in place. 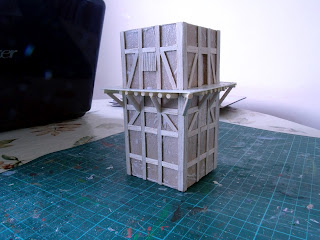 The underside of the roof gets some attention in the form of some purlins, to support the underlying planked structure.  These are just lengths of balsa, 2-3mm wide, glued in at about 7-8mm centres. The pencil line prevents them going too far back and interfering with the fit of the roof. You could also add the planks by applique (before the purlins!), by scoring them in or with paint / ink at the final stage. 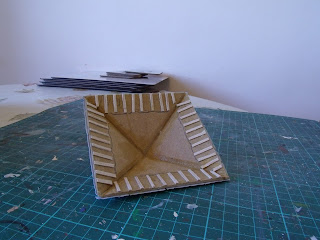 Back in the first part, I said I had drilled holes in the walkway to add a parapet. The parapet is as near as it gets to a vital piece in this post. Personally, I don't think anyone in their right senses would have a tower like this without a parapet, but then, I don't like heights at all. Other people are far more blase about this sort of thing... Either way, the parapet is a bit of a faff to build. It really does need to be the last thing you add, as it inhibits handling the piece for other construction (that is to say, you'll break it!)

The model plans show a lovely structure with cross-braced bits between the uprights. I thought about making this, and almost lost the will to live, as it would be very fragile (i.e. have a nearly non-existent lifetime on the gaming table), and fiendishly difficult too. I settled for a much simpler post and rail structure. The posts are 18 gauge 20 mm brad nails from my air nailer. A gentle introduction to the blowtorch removes the glue / laquer that holds them together in a strip. 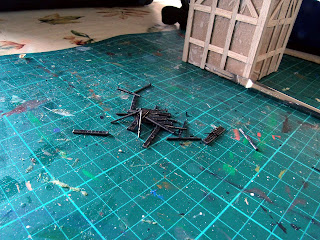 The rails are made of balsa, with pilot holes made using a pin. I lined up the existing holes as a template, and marked each rail separately (labelling them to prevent confusion). 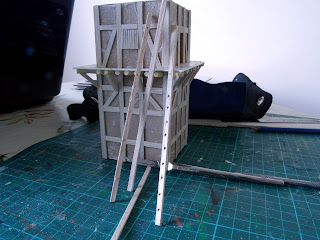 To put it together, first I put a brad through each hole from below (the small tee head stops them pulling through). 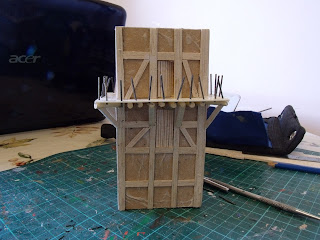 Then, I pushed the rails down into place and flooded the joints with cyanoacrylate to secure them. I then pulled the rails up so all the brads were sitting flush and glued the bottom joints. 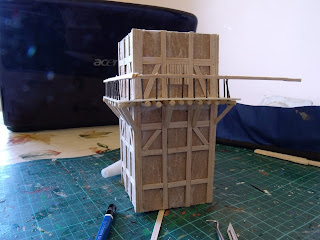 Finally, I glued the ends of the rails together and trimmed off the excess. 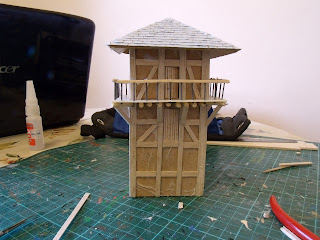 A parapet, at last!

I added a fairly small base. The evidence seems to suggest that the towers were surrounded by a set of walls and ditches, at least in Roman use. Obviously it's no big problem to make a set of turf walls in situ as part of the base, but I left mine without. I can add a separate set of walls if I want, or use the tower as is.

In the immortal words of Norm Abram of the New Yankee Workshop, "This piece is about ready for the finishing room!" 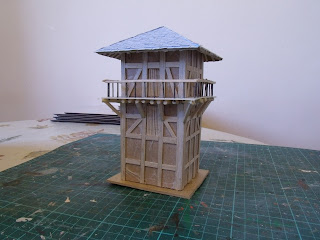 And here it is finished. A little bit of groundwork is all it needs - there might be more mud and weeds than grass around the bottom of the tower. I used the usual base coat of panzer grey and various drybrushings to bring out the texture and structures. If you wanted, you could really go to town on a "tidy" paint job. If this was a Roman structure, or even part of Alfred's military system, the old rule that "If it moves, salute it, if it doesn't move, paint it", might have applied and regular coats of whitewash would have been the order of the day. Mine follows a more relaxed regime. 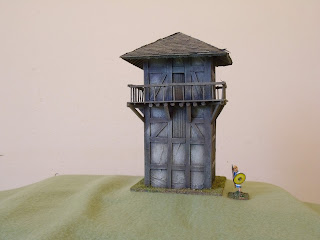 Here's a rear view, for comparison. Doesn't look too bad from this side, either. 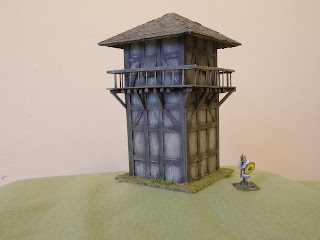 Here's a close-up of the parapet. I think it works pretty well now it's painted up, and it's a nice robust structure, given that it's pretty well in scale. 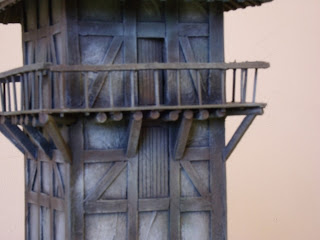 The surly ceorl from Black Tree Design, doing his stint on guard here, is to give a sense of scale. He looks happy to be there, doesn't he? 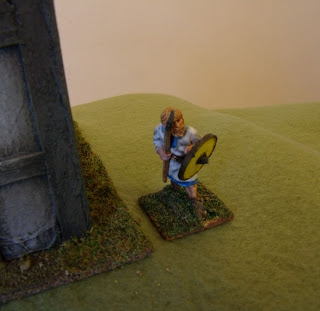 Can I go home yet?

One last thing that this building obviously could have added is a ladder. When it wasn't in use, the occupants of the tower would have pulled it up and stored it inside, so if you don't have one propped against the door it isn't the end of the world. Plastruct make a few plastic ladders, and a lot more are available from model boat suppliers.