This is going to be a long, rambling set of posts. It's likely to be a big job, and I'm pretty sure that there will be a number of points at which I am going to ask myself if I should have just bitten the bullet and bought a Gripping Beast resin version!

A build like this obviously has to start with the hull. As usual, there are several possible ways to approach this.

1 Carve it from a solid block of timber. I don't think foam would work - it lacks the rigidity, so it's a timber job. The upside is that this would be cheap. On the other hand, it's going to be almost impossible to get anywhere near a realistic, in scale thickness for the hull, and it would be incredibly easy to crowd a chisel through the thin sections and ruin the whole thing as you go, so I'm forgetting this.

2 Built it like the real thing. I actually considered this, then asked myself if I had gone insane. The curragh is a framework of timber (possibly laths and battens, possibly wickerwork), with some larger timbers and a layer of tarred hide over the outside. The end result might be realistic, but I suspect it would last a fast five minutes on the gaming table, and the intricacy of the build would be soul-destroying.

3 Mould the bloody thing! Two possible ways occur. Each starts by building an outer form for the hull by carving it from timber (see 1 above). Since there is no reason to hollow out the hull, it's much simpler and much stronger this way. Then, either plunge mould the hull from sheet styrene (the way I used to make replacement canopies for model aircraft in the days when giants walked the earth), or use glass fibre matting and resin.

The former potentially gives a weaker hull, and it will need a LOT of internal detail added from stretched sprue / microstrip, but it's easy, and the methods and materials are relatively innocuous. The glass fibre version will be stronger, and will have the advantage that the glass scrim will resemble a woven inner structure. However, it's ghastly stuff to work with, and the possibility that the hull won't release from the mould is very real - and very difficult to remediate.

Anyway, before all of that, I needed a set of plans, so here they are. Printed at full scale (A4), with the main grid lines set at 10 mm, these are good for 28 mm minis. Adjust the scaling as necessary for (eg) 15 mm. 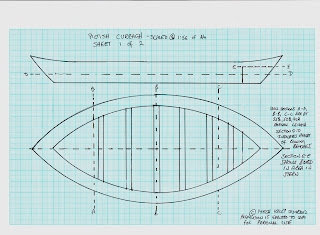 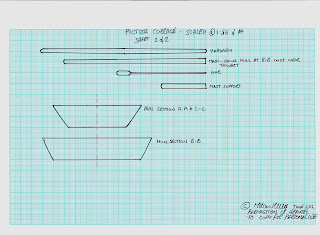 There wasn't a cat in hell's chance of it all going on one sheet, so the hull is on one and the rest is on the other. Note that the mast, mast support, yardarm etc don't have any allowance for tenons to join them to each other and the hull!  It isn't abundantly clear exactly how the mast is stepped. The lightness of the structure seems to indicate something other than the huge block of timber (kerling) used on Viking longships. I've had a good look at pictures and plans of Inuit umiaks, which are structurally similar, and there just seems to be a hole in the thwart and a corresponding hole in the keelboard, and the mast just drops in, which look a bit hit and miss if you ask me!