Making the roof offer many options, including the following: carve it from solid foam, make it up from foam sheets, foamboard, MDF, etc, etc.

I chose to make the sides of the roof from foamboard, using a single piece, scored in the middle to allow a fold, and ends made of MDF. I felt this offered a combination of strength and lightness. It was also driven by the fact that I didn't have enough foamboard to do the whole roof... 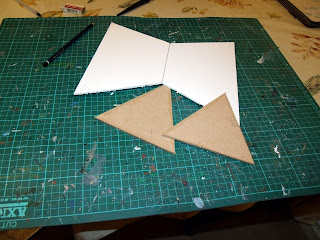 Cutting the foamboard is easy with any sort of knife. I cut the MDF with my mitre saw, then primed the edges with PVA. Assembling the roof is a pretty simple job using PVA, and some tape to hold everything in place while the glue dries. 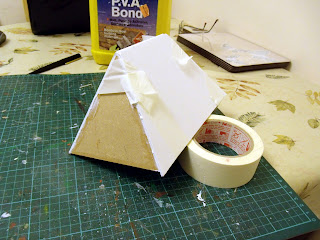 The roof glued up and drying.

I added some internal structure to the roof (rafters, basically) with coffee stirrers. Some small wooden blocks, with compound angle cuts, will be glued inside the roof later to act as location markers. These will project below the level of the bottom of the roof, and be positioned to account for the thickness of the walls. They will keep the roof steady, in a position so that it retains some squareness, and doesn't appear to have been put on whilst the workmen had been sampling the local ale a bit too enthusiastically. Note also there is no chimney. Chimneys and smokeholes apparently have a nasty habit of drawing sparks and heat from open fires up and setting the roof alight! The smoke would have collected in the high roof (keeping down pests as a side-effect) and gradually percolated away through gaps, but it's probable the interior was a bit gloomy and smoggy! 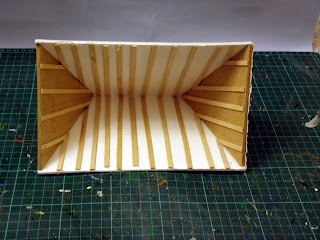 The roof could be thatch or shingles. I've got plenty of thatched buildings, so I went with shingles for variety. The Regia Anglorum's Wychurst website has some wonderful photos of their reconstructed great hall. These give a sense of the size, shape and layout of shingling. Shingling is a highly labour-intensive process, whether in scale or in real life. My shingles were cut in strips from Slaters planked plastic card. An alternative would be heavy cartridge paper (the same material I used for the quoins on the church) glued in place, but that would be even more laborious. It's worth noting that even though the shingles would have been split from solid timber with a froe, they were generally tidied up and fettled to fit, so the actual surface would have been quite smooth. Even more than planking the walls, this job is best approached in bursts. The shingles in the reconstruction are curved at the ends. There is no reason to assume this is universal - thankfully!  Getting this stage completed was stymied a bit by a lack of planked plastic card! When I finally managed to get to my local model shop, they had every size except what I wanted, so I had to succumb and mail order some. To cut a long story short, 2mm planked plastic card seemed to suddenly have become as rare as hens' teeth, and it took an age to locate and get some, so the build stalled, for quite a while. I formed the ridges from strips of 20 thou plastic card 6mm wide, folded in the centre, and applied lapped over. Fortunately, this was  less tedious than the rest of the roof. I'm about 85% happy with the result, but I think I'll shingle slightly smaller roofs in future! 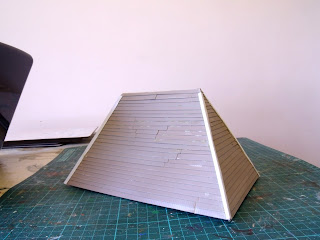 The shingling finished - at last!

The temptation to really go to town with internal fixtures was pretty strong, but I managed to restrain myself. Some benches, built along the walls using balsa strip, foam and Wills Kits plastic board would have provided the seating (and sleeping) accomodation for most people. 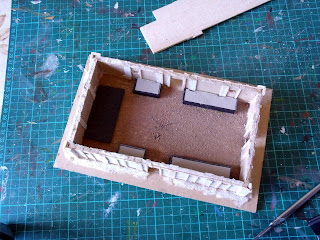 A central firepit was constructed from chunks of fired Fimo clay, glued down with PVA. 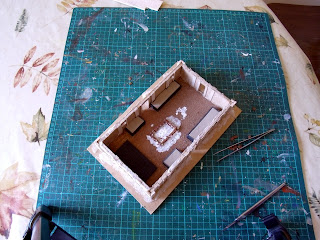 Basework outside involved some shreds of waste foam to make the ground look a bit uneven, then sharp sand. Next up was a coat of black spray over everything. 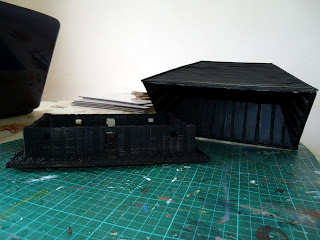 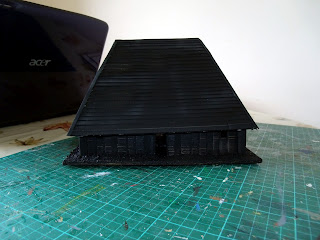 Roof on. Would you buy this house off-plan?

Here's a couple of shots of everything with the primer on, just as a taster. The last stage will be the painting and the final details. Anyway, I'm off on my holidays, so see you in a couple of weeks.