The final part of the saga! You could be forgiven for thinking that there was an enormous amount of work went into this, based on the time it's taken to write. In fact the building, painting and whatnot was fairly quick,compared to the problems involved with supplies, computers and cameras!

Anyway, first thing was a layer of flock outside, muted down a bit with a burnt umber wash.

A large chair (for the thegn) was put on a low dais at the doorless end, where the master and mistress of the hall would have sat. This were plastic card, scrap balsa and a bit of greenstuff. The rushes on the floor are sisal string held down with PVA. A wash of burnt umber followed by a drybrush of a light, dusty colour ties these in. You could add tapestries, and all sorts of other decorations but I limited myself to a shield on the wall for colour. 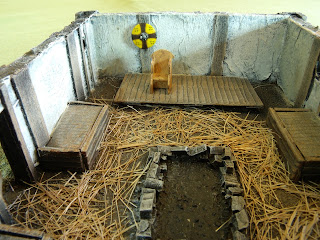 Best seat in the house.

I added opened shutters on the windows, plus two doors closed, and one open. I felt it was easier to add these later on, to avoid them breaking off during construction. 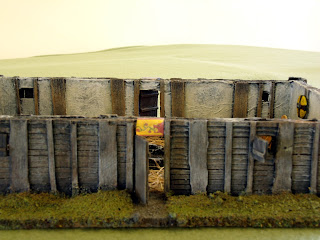 The final touch was some decorated panels over the lintels of the doors. These can be very colourful and decorative, making a nice accent. I drew these out, about four times the final size then shrunk them to fit on the computer. 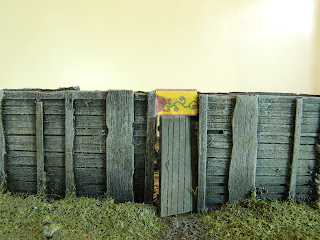 Here it is, finished. Not perhaps the dwelling of royalty or even an eorlderman, but a building belonging to a successful thegn, and step up from the Anglo-Saxon equivalent of a used car salesman! 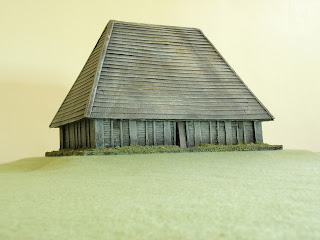 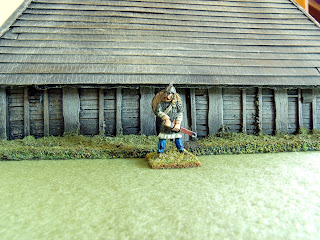