So I lied! I managed to finish something else before the year petered out.

I came across Miniature Design Studios a little while back, and after the exchange of a few e-mails with Dave at MDS, finally got round to buying some metal from him.

When I bought these figures, I ordered three "Unit Builder Packs", each of ten figures, one lot of archers, one lot of crossbowmen and a set of javelin-armed skirmishers. At my request, Dave very kindly put a mixture of the available poses of each figure type in each pack. Unfortunately, but for very sound reasons, Dave no longer offers this pack size.

The packs arrived two days after being ordered, well packaged and complete. Beat that for service! Size-wise, I think the figures fit very nicely with my "usual suspects" (Gripping Beast, Black Tree, Crusader, Newline, etc.), but are at the slim end of the spectrum rather than the epic proportions of, say, Renegade. Quick piccie here to let you draw your own conclusions. I am perfectly happy to mix any of these. 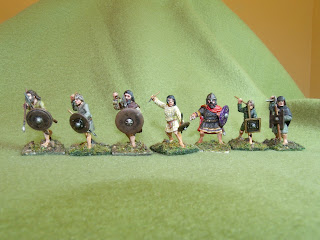 Castings are crisp and neat, in a hardish metal that responds better to scalpel and file than burnisher. Having examined all thirty figures, precisely ONE had any visible flash (and very little of it there). Mould lines were small and fine, and easy to remove. No evidence of pinholing or miscasting anywhere on any figure. The castings do have a number of tiny "pigtails" adhering to them, as seen on Perry castings. Look out for these - they aren't always easy to spot and do nothing for the final finish if you miss them!

Poses are nice, quite dynamic in most cases, and thoroughly believable. The anatomy is realistic, and as I said above, the figures are slim rather than bulky. Since they are intended to represent the lower echelons of a Dark Ages subsistence farming culture, I reckon this is no bad thing!

The javelinmen came in three poses, immediately generating a nice sense of variability among them. This was enhanced by the addition of a good selection of separate shields. Two different sizes / designs each of round and square shields, plus an iconic "H" shaped example mean there's no way this lot are going to look uniform! Helpfully, two of the poses actually have both hands moulded to hold a weapon which makes arming them with a number of javelins quicker and simpler. The javelins themselves are moulded separately, on small sprues as sets of three. A total of 12 are supplied, enough for a couple of the figures to carry two weapons each. I'll put my hands up and say I'm not a big fan of white metal spears / javelins. I prefer to make them up from brass or steel wire, but these ones are nice: they are in scale, with realistically sized heads and note they actually are javelins, not spears that need to be cut down and reshaped. Front and rear views of the three different poses. 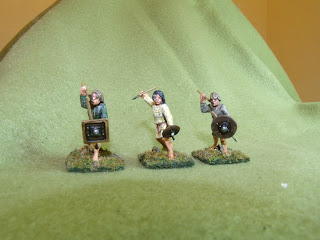 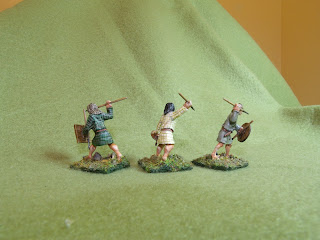 Don't throw those bloody spears at me!

The archers come in five poses, two examples of each of which were delivered. The range here, loading, firing and kneeling, some in cloaks and some without, is fantastic. The bows are moulded on the long side, allowing you to cut them down if required by your views on Pictish archery techniques. These are strung with 8/0 flytying thread fixed with cyanoacrylate. 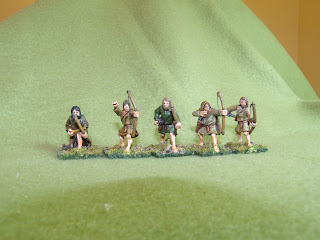 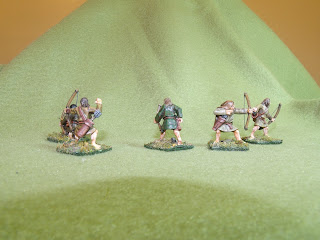 The crossbowmen are currently two poses only. Both wear cloaks and give the impression of being very sneaky! The crossbows are moulded separately, which I think is a nice touch. Additional poses are in the works and if they follow the lead of these two as the other figure types have, these should be very nice indeed. 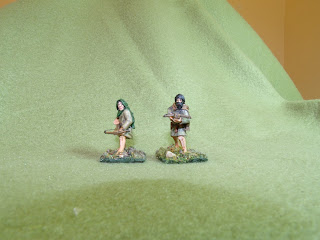 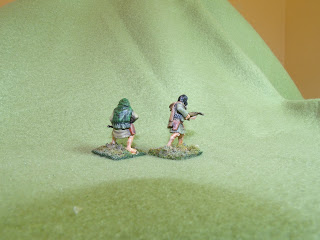 None of the figures carries a secondary weapon. If you're bothered these can easily be added via a bit of greenstuff. I've done this with other minis I got but these are "as is" to show what MDS provide before I muck it up!

The MDS range is expanding all the time, and it's well worth checking in on the website and the Facebook page to keep abreast of things currently in the work. As I understand it, at the time of writing additional crossbowmen are in the works, along with spearmen in cloaks (the masters look brilliant), plus cavalry (yay!) and a chariot (not for me, thanks).

Dave has rationalised his prices, as I noted above. This is to provide some capital for the expansion I mentioned. I think it's worth  pointing out that even after this, these minis work out at precisely £1.10 each. This is still significantly cheaper than most of the other manufacturers I buy from. Given that many Dark Ages armies are figure-dense due to the relatively low points cost of the troops, this is an important consideration.

For the record I am kicking myself for not buying loads more figures before Dave changed his prices. However, I confidently predict he will be seeing a thick slice of my disposable income in 2013.

Recommended without reservation.
Posted by Mitch K at 17:07