OK, first things first. As far as we can establish, the cattle around in the Dark Ages in the British Isles were more like this: 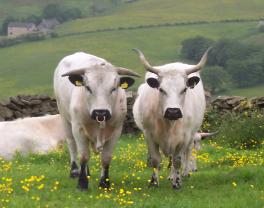 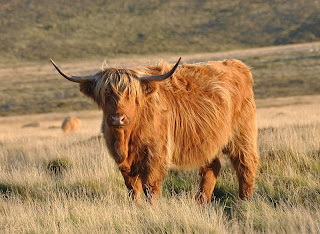 
These miniatures cost a princely five pounds for the five from Irregular Miniatures, at this year's Vapnartak show. Their stand is always worth having a root around over. There's all sorts of weird and wonderful things to be had that are great for adding colour and interest to the table. 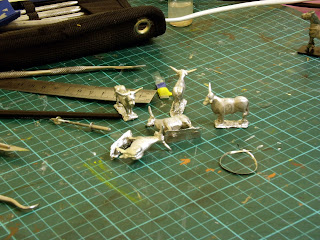 As you can see, the general shape and form of the bodies is close enough to White Park cattle to be convincing, and the horn shapes, while not exactly right are actually pretty close for the cows (upturned) and easily convertible for oxen or bulls (forward pointing).

After a quick cleanup, tidy and fettle the models were ready for the minimal conversion needed. The flash, although it looks pretty bad, more or less fell off. With care, patience and a decent pair of pliers, I bent the horns on two of the animals to more closely match White Park cows. These two then got udders modelled with greenstuff. Well, with horns like that they aren't going to be maiden heifers, are they?

The other three had their horns bent so they point forward (where they are more useful in attacking head-on...). This was more tricky than for the cows but I managed it without having to rebuild any. Since these are oxen and not bulls, I didn't have to model any additional "equipment"...

Painting was simple: white undercoat / primer, followed by a coat of light grey into all hollows and dips. I drybrushed heavily with Vallejo deck tan (to blend the shading a bit) and then drybrushed with white. Finally I blocked in some highlights with more white. Ears (insides only!), noses, eyes, hooves and odd bits of the lower legs were painted black and the horns a pale greyish brown, with panzer grey on the tips. The udders on the cows were flesh tones, shaded and highlighted. Well, here they are - Dark Age burgers on the hoof. The Pictish horseman attempting to keep them going is from Newline Design for comparison. This side view gives a good idea of the build and form of the beasties. 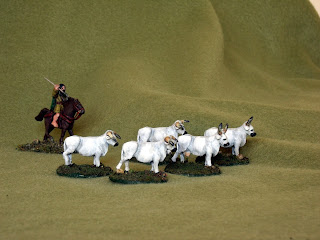 If plain black and white is a bit dull for you, there is another surviving strain, which has "red" (russet) ears. These would seem to be the subject of the Táin Bó Cúailnge, so how's that for a reference! The "red" genes are recessive and now only seen in isolated herds, exemplified by the Chillingham Castle cattle.

I based them on large washers to allow the beasties to be easily scattered across the table top. These would be ideal as booty in "raid" games, could serve as draft animals for the many carts that are now on the market or simply as a mobile hazard wandering randomly across the game table to make life hard for both sides! Like this... 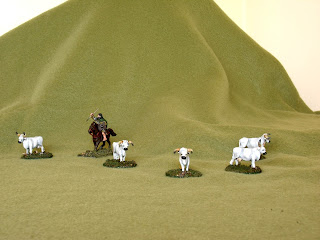 Pity the poor Pictish horseman trying to keep order among this lot!