For the latest Dux Brit raid, Jeff and I played the convoy game.

I took  the Romano-British, under a new commander, following the crushing defeat I received last time. I had my hearthguard and warriors, plus one unit of levy defending the wagons, while the rest of the levy and archers, under the command of Cei, one of my nobles, was sat in the fort.

Cei and his men are out of beans, bacon and beer and are desperately hoping Tristram and Bedwyr can get to them before they die of thirst.

The game started slowly. Painfully slowly. The wagons didn't so much roll as crawl like arthritic snails, as my two units positioned themselves to keep themselves between the wagons and Jeff's marauding Saxons. Fortunately for me, the only thing moving slower were the Saxons! Jeff struggled over the hill, making terribly heavy weather of the terrain, until he finally managed to reach my warriors. Jeff had a unit of skirmishers thistime, the result of his massive win last time. This was the first time the skirmishers had been out, and we were interested to see their effect.

Finally one of his nobles, Cenric, managed to contact with Bedwyr, who was protected the back of the wagons with warriors and levy. Meanwhile, both Tristram and Aelle had several goes at rushing into combat with each other, but neither could achieve enough movement! Losing one pip of a D6 doesn't seem too bad, until you keep rolling ones and twos all the time! The satisfied themselves with insults, and ineffectual  javelins and arrows from Jeff's archers and skirmishers. 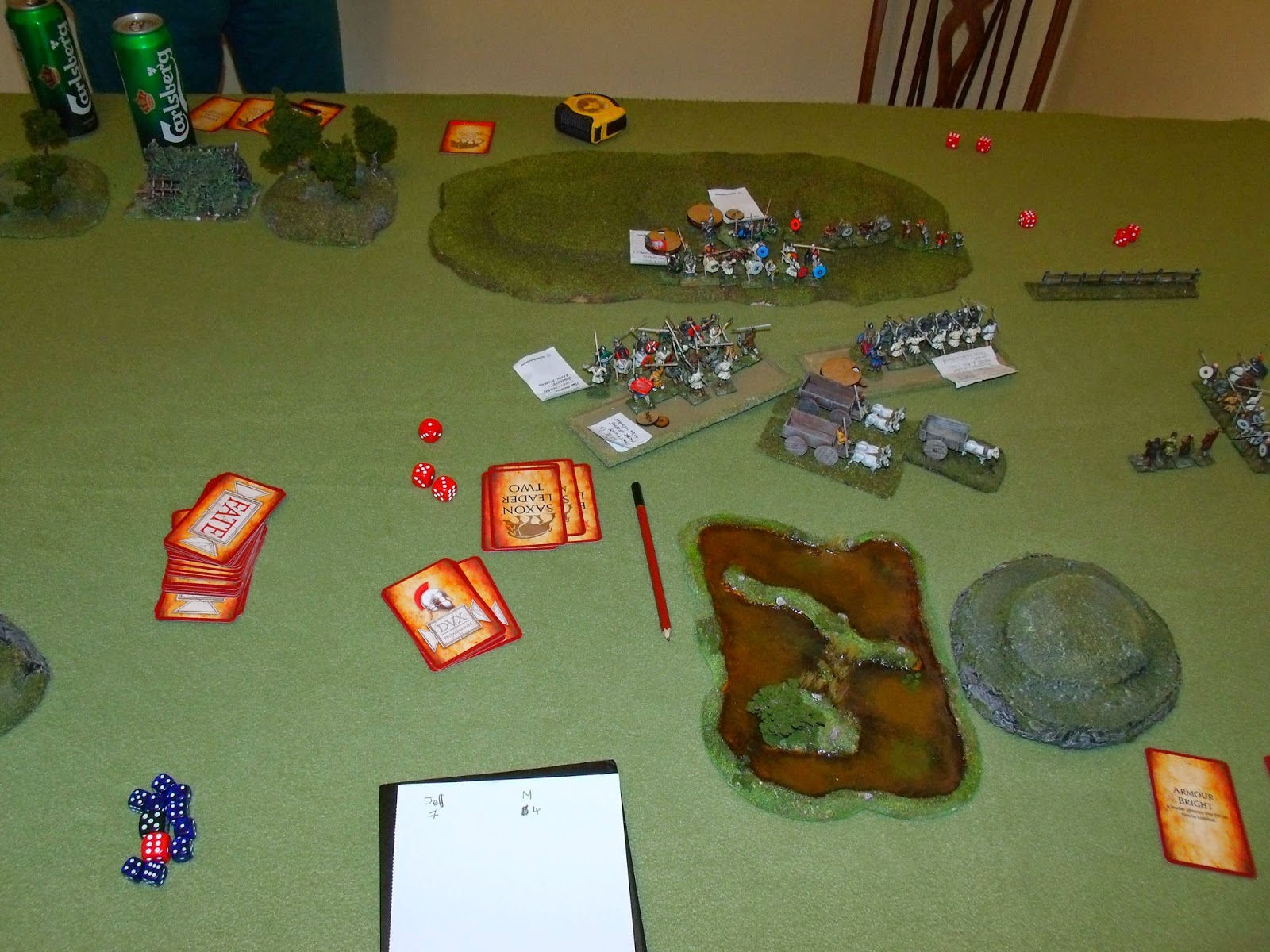 A sudden turnup for the books occurred here: Jeff sent Cenric to attack Bedwyr again. With Bedwyr himself wounded, and down to a unit of levy with a couple of surviving warriors, this ought to have been a massacre. But the shieldwall held, and Cenric fell back wounded, his men reeling with shock. Bedwyr managed to  not follow up, which was just as well, and the wagons managed to crawl a bit further on.

Aelle still couldn't force a charge against Tristram, and suddenly noticed that Cei had sortied with the rest of the levy, threatening his flank! 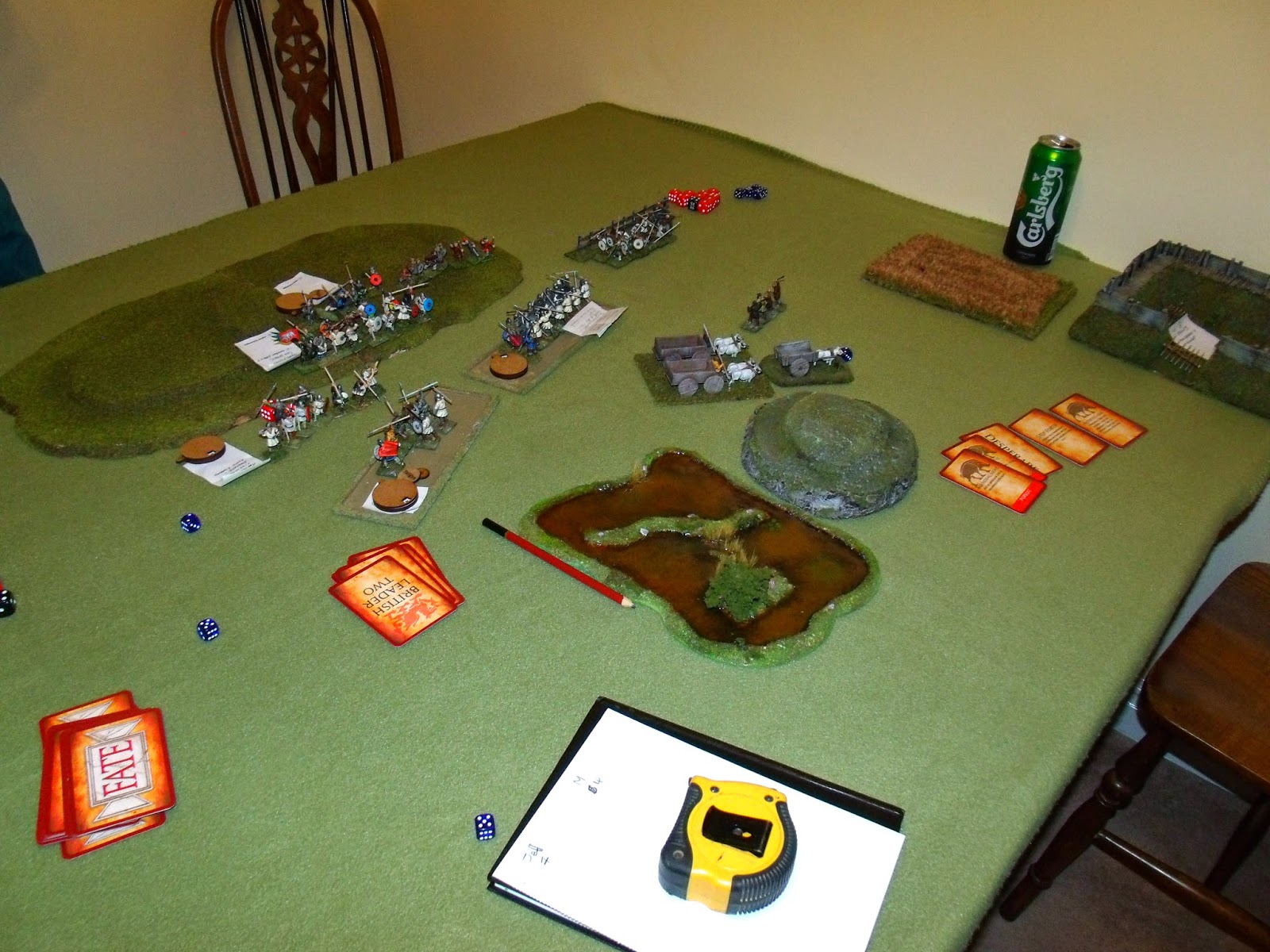 Where the hell did that lot come from?!

At this point, Jeff decided that the beans, bacon and beer simply weren't worth it, and Aelle retreated in good order - very slowly, again. Even the skirmishers couldn't help him! Tristram decided not to follow up, and the beer arrived safely, to slake the thirst of the weary Brits. 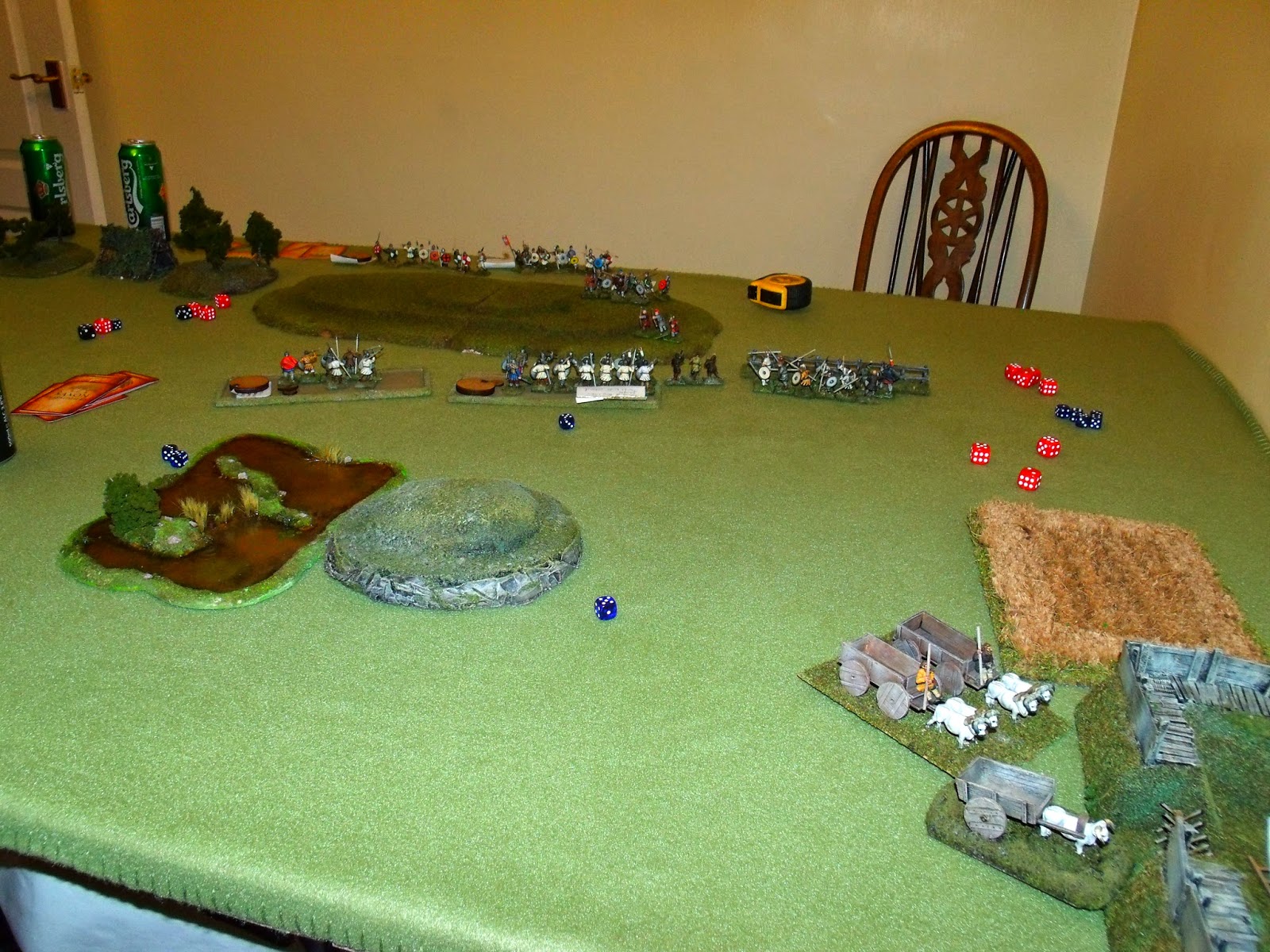 Make mine a pint!

Jeff was stymied by the terrain, and had he entered the table somewhere he could have moved a bit faster, things might have ended very differently. As it was, there were few casualties on either side, but my hand of pursuit cards left me with a thief's horde. Better than last time!