Here's the latest build completed. It's another Airfix 109-E, but this time in the markings of the Royal Yugoslav Air Force.

The RYAF had bought about 70 Bf109's paid for with an exchange of minerals/metals. The Bf109E3a was the export version of the same E-3 the Germans flew. Apparently the Germans were less than forthcoming with spares etc, and provided an after-sales package that would have no chance of winning any sort of customer service awards anywhere.


The RYAF flew a selection of modern fighters and bombers at the start of the war, and was much stronger than (for example) the Belgian or Dutch Air Forces. However, they were outnumbered about eight to one on paper by the Axis forces, and in practice due to serviceability issues, the RYAF couldn't put their entire force into the air when the Germans attacked. Despite being short of spares, fuel and even machinegun ammunition, and lacking thecombat experience of their enemies, the Yugoslav pilots' morale was unaffected, and there were occassions when there were more aircrew wanting to fight than aircraft for them to fly. 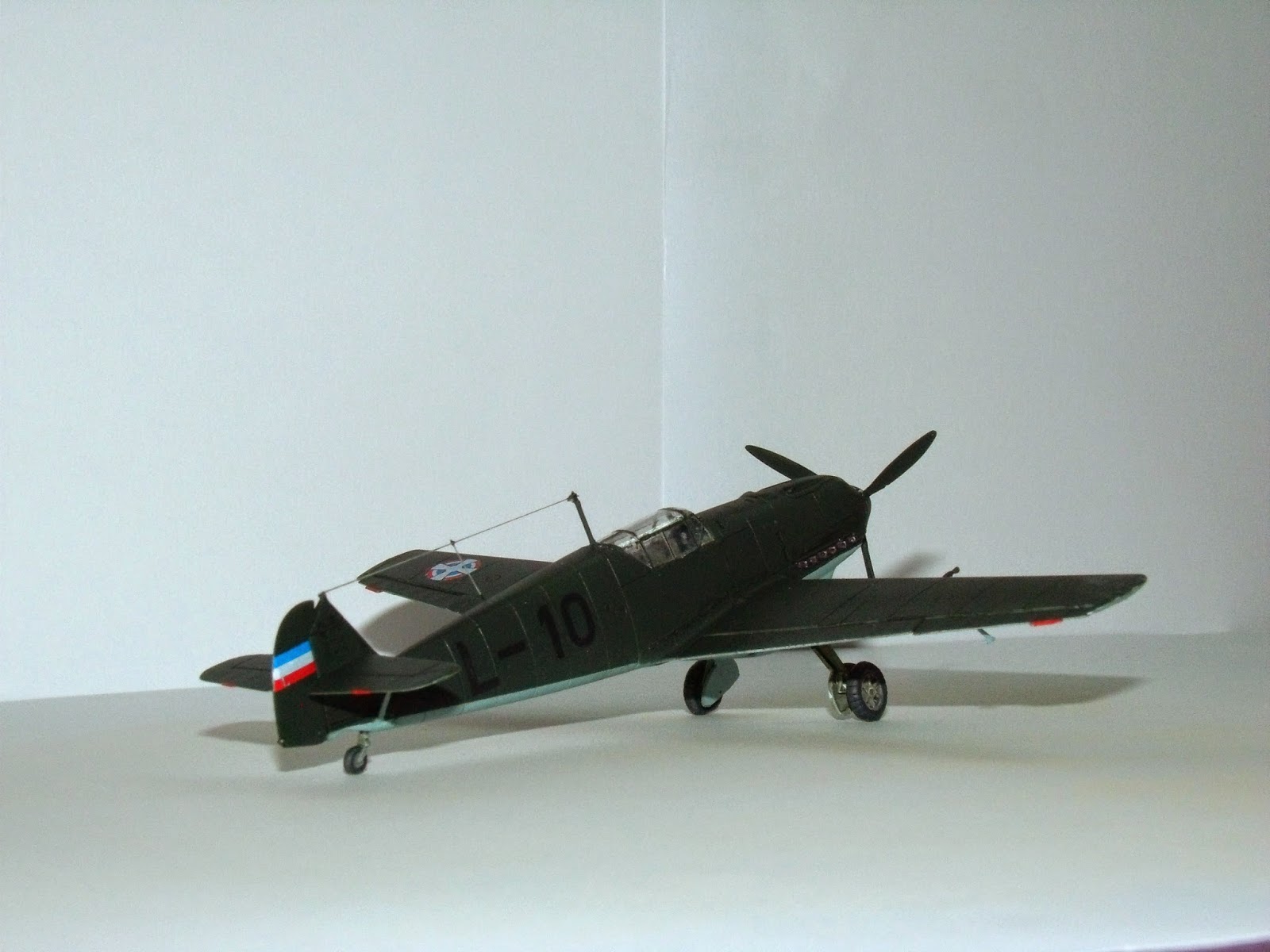 Obviously this is not an out of the box build. The Airfix kit depicts an E-4 or E-7, which had a differently shaped canopy with a lighter frame, and (according to photos) no head armour for the pilot. 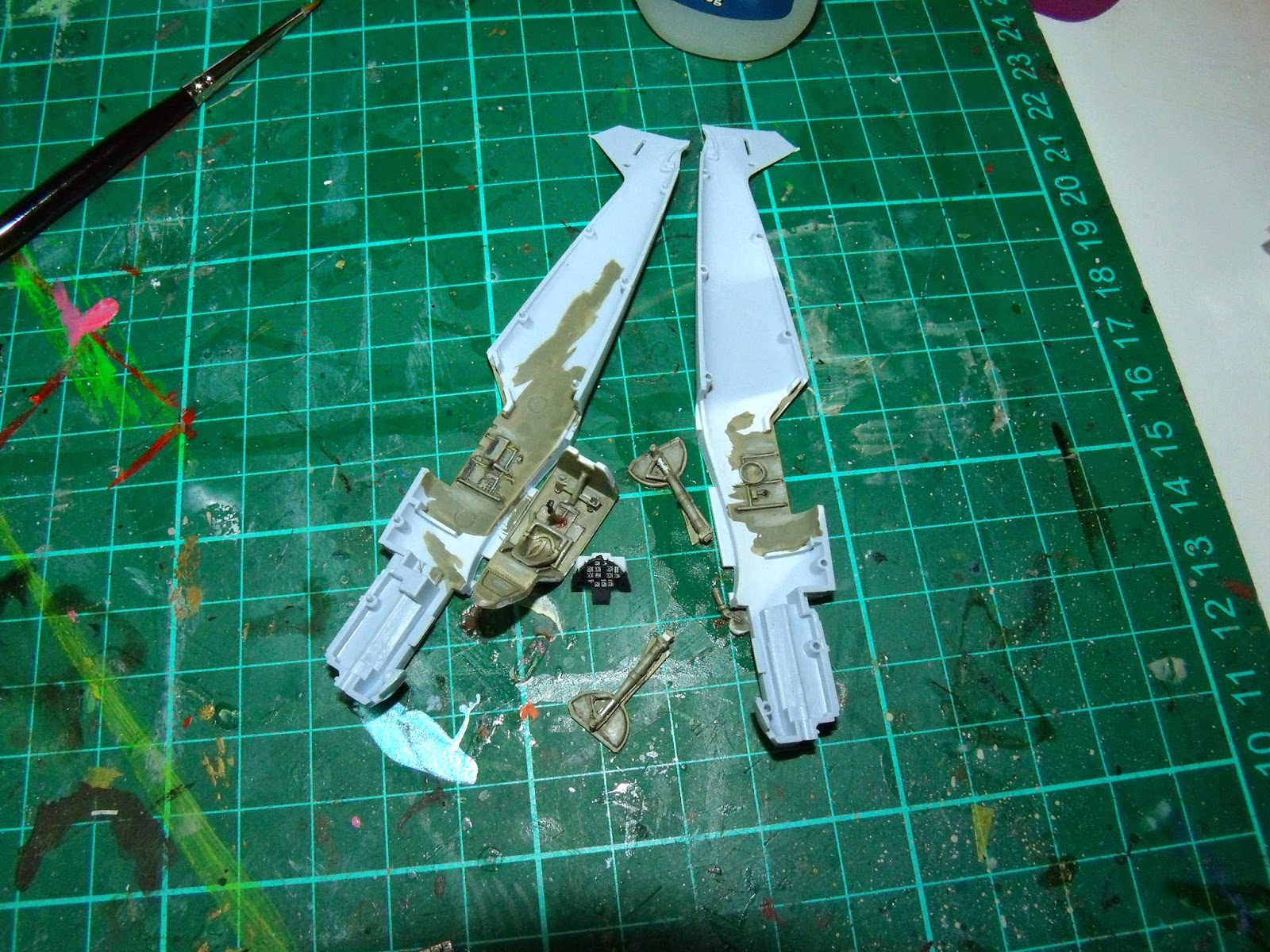 Here's obligatory shot of the cockpit before it got closed up. The detail provided by Airfix is pretty good, and once the canopy is closed, almost invisible, so there's little need to add much else. I went with straps on the rudder pedals (the seat has harness moulded on), trim wheels, throttle/mix levers and a seat adjustor from stretched sprue. The undercarriage legs/doors were hotted up with brake pipes added from fine wire. 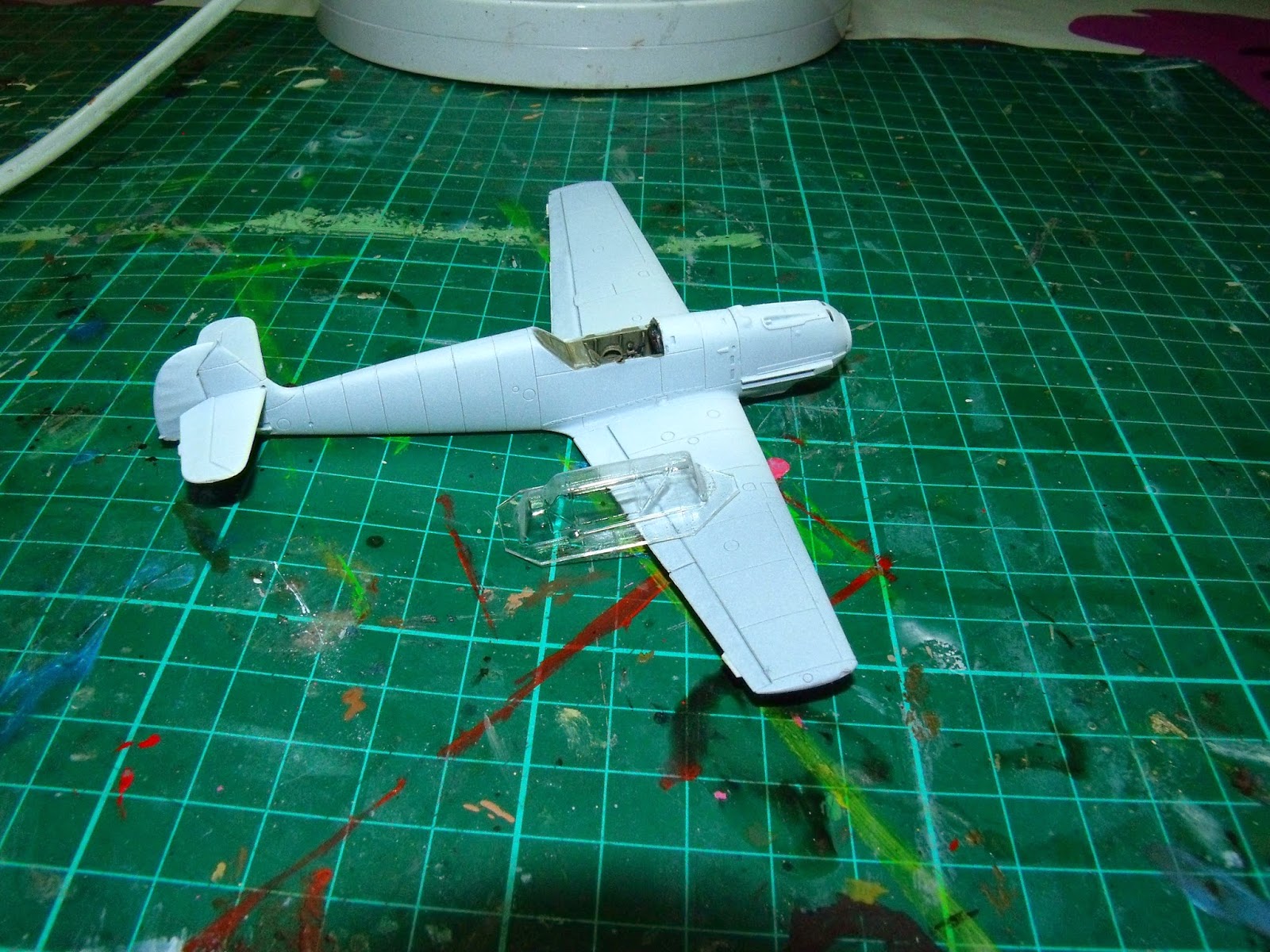 The alternative canopy was a vacform from Pavla. I bought it on Ebay, as a pack with a second canopy from a 109-K - goodness knows when I'll use it! It was a very long time back when I last did anything involving vacforms, so I was a bit nervous starting this. 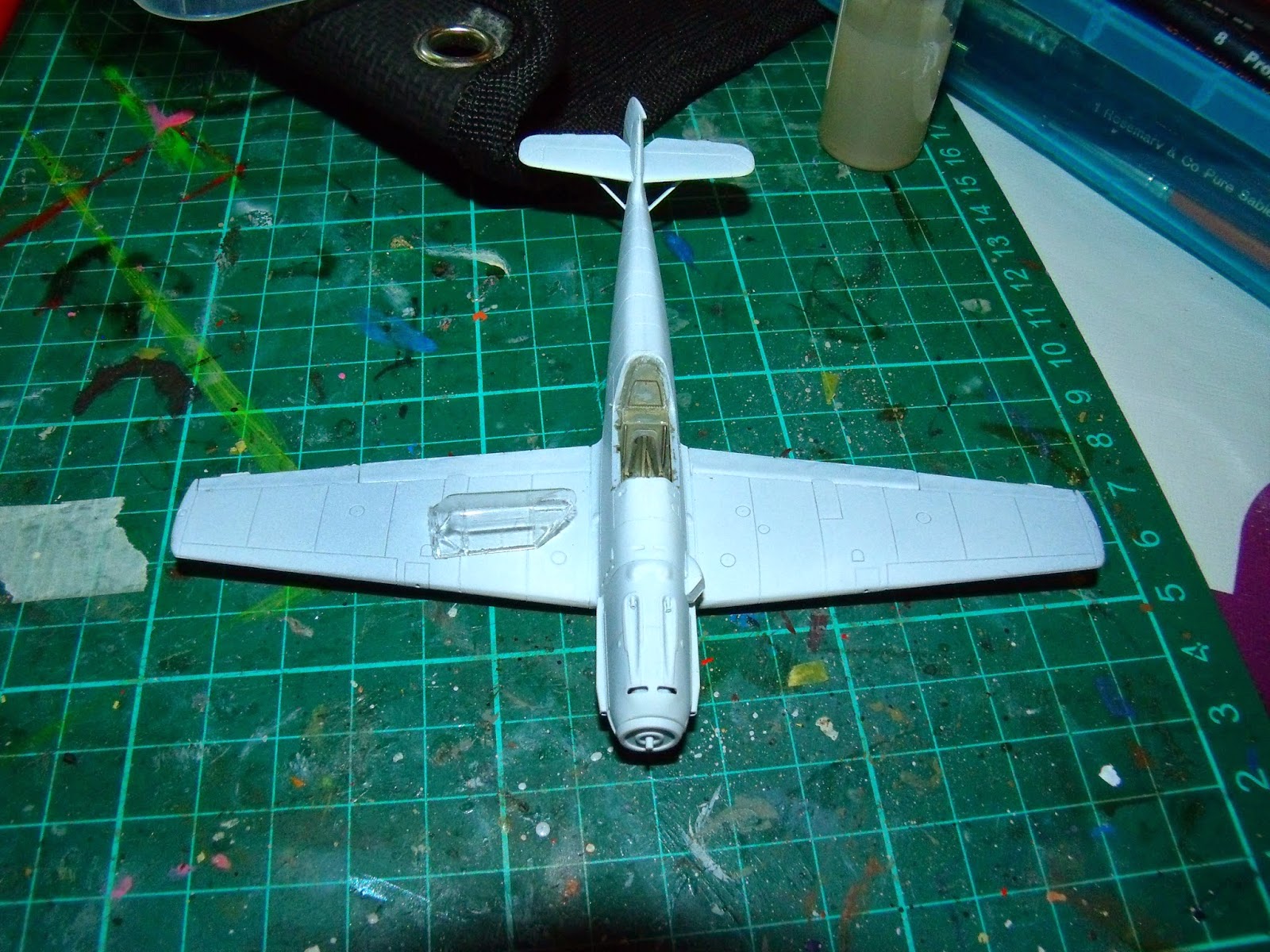 I followed the usual practice of carefully cutting out the part. Pavla mould the canopy including some pieces of rear fuselage and canopy, so it's easy to cut out the proper part, and probably it allows the canopy to fit on different manufacturers' kits. Sanding, checking, more sanding and more checking eventually gets the fit OK. 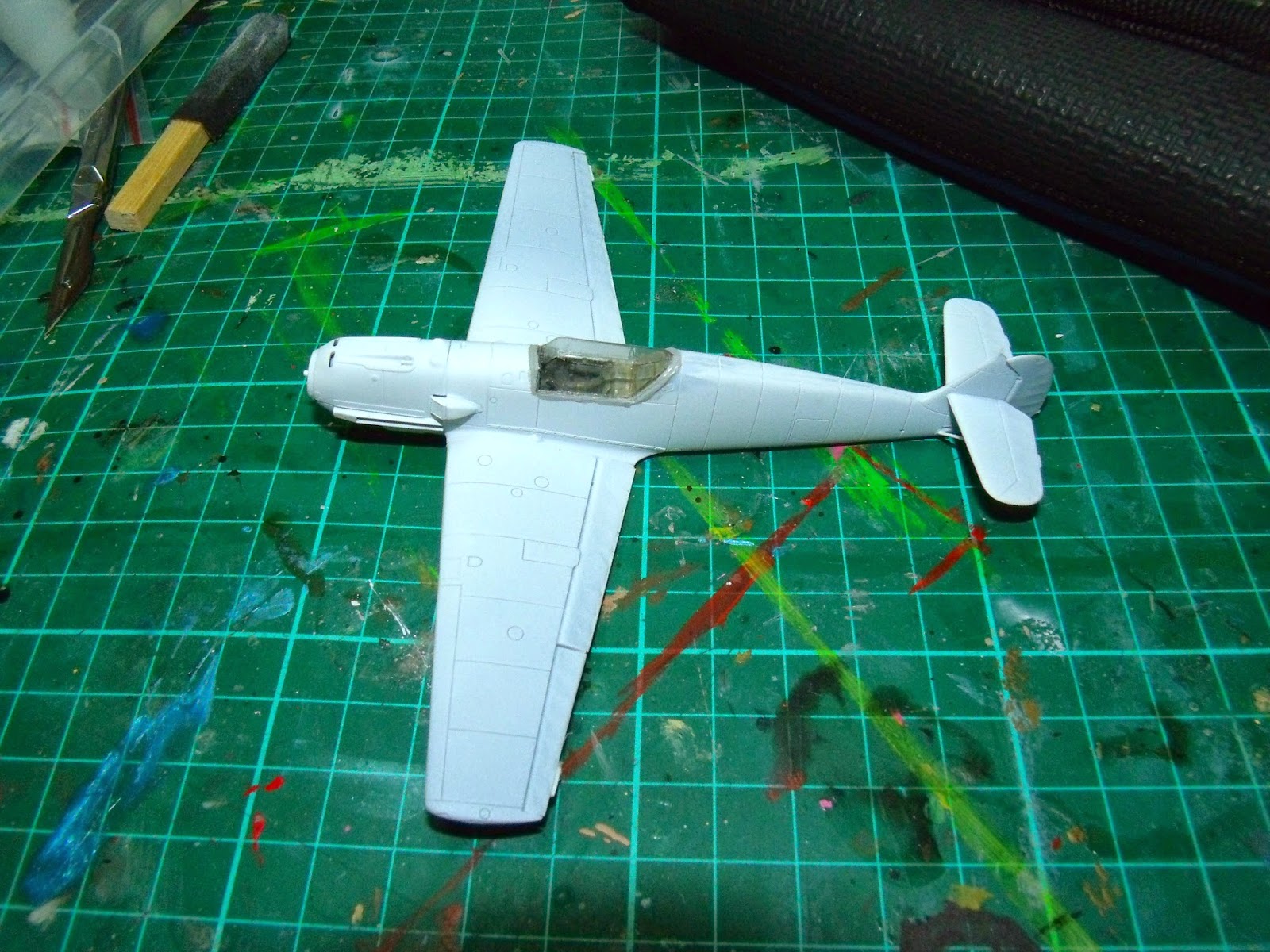 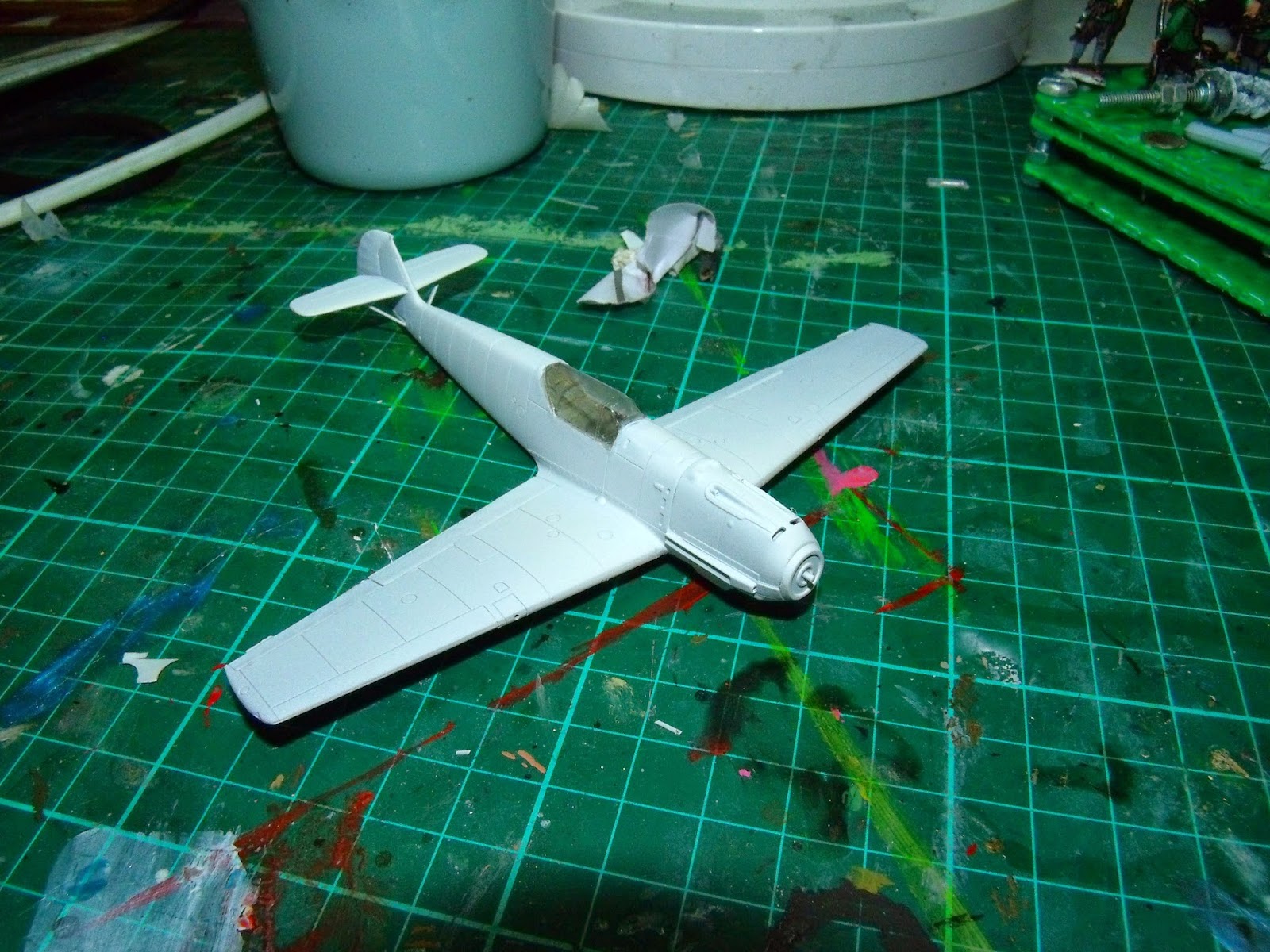 Once sanded, the canopy is a treat. It's very much thinner and clearer than the kit offering, and allows more of the cockpit to be seen. I drilled out the machinegun  and cannon barrels, and the exhausts which improves their look no end, and added a vertical reinforcement bar in the underwing radiators. 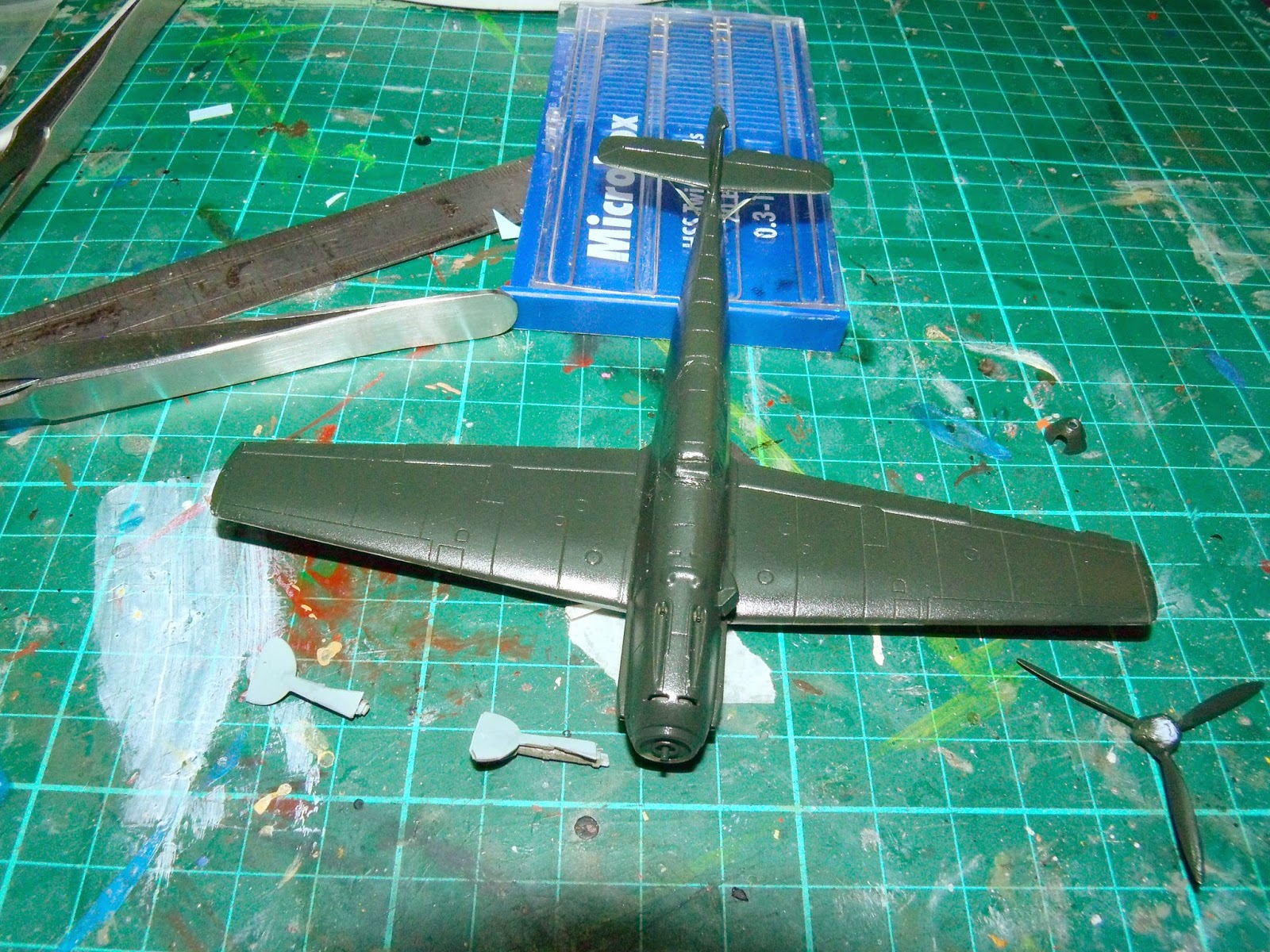 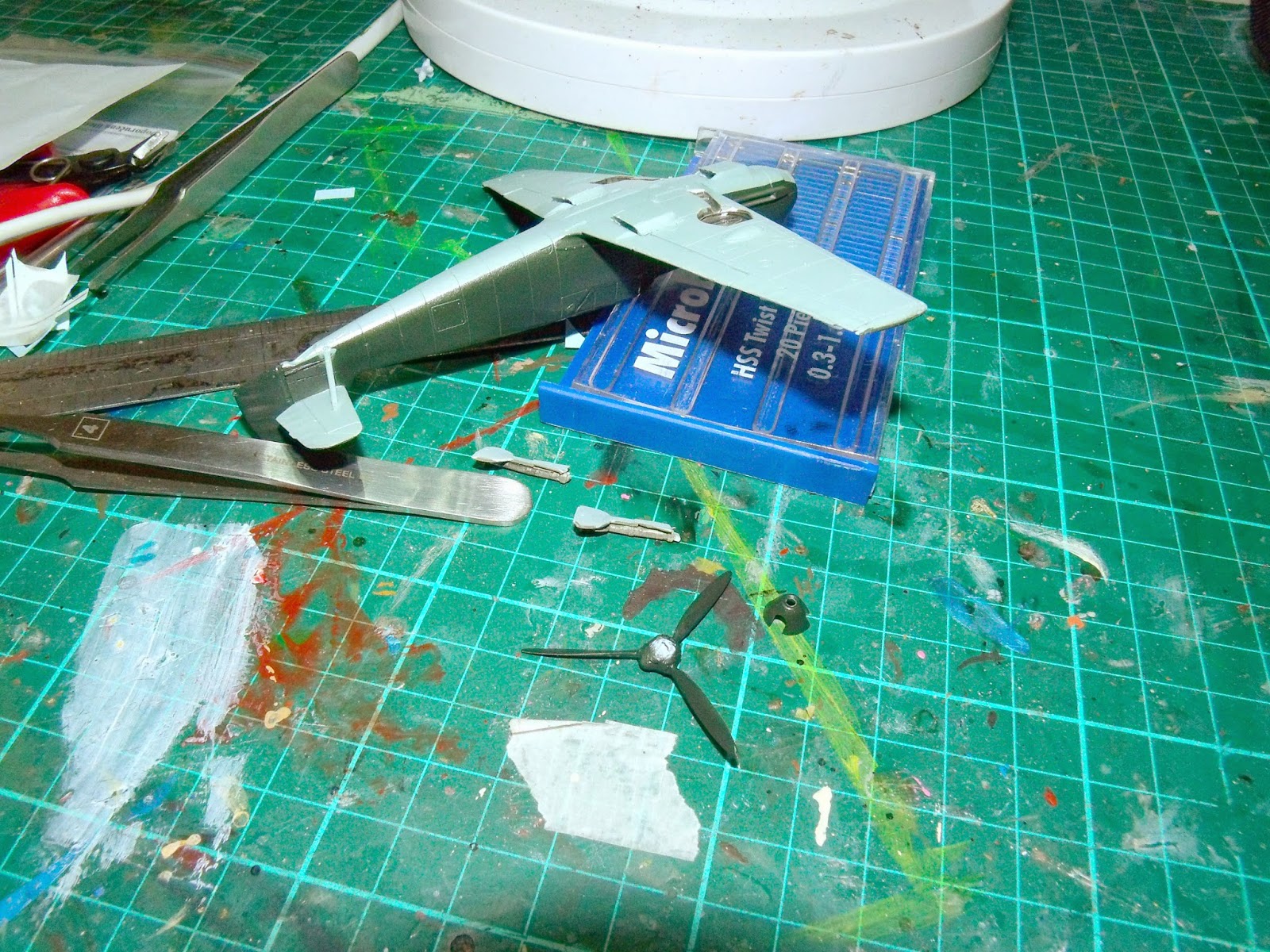 The paintwork was simple: RLM70 over RLM65, both out of the pot Tamiya acrylics which airbrush beautifully, followed by about three coats of gloss ahead of the decals. 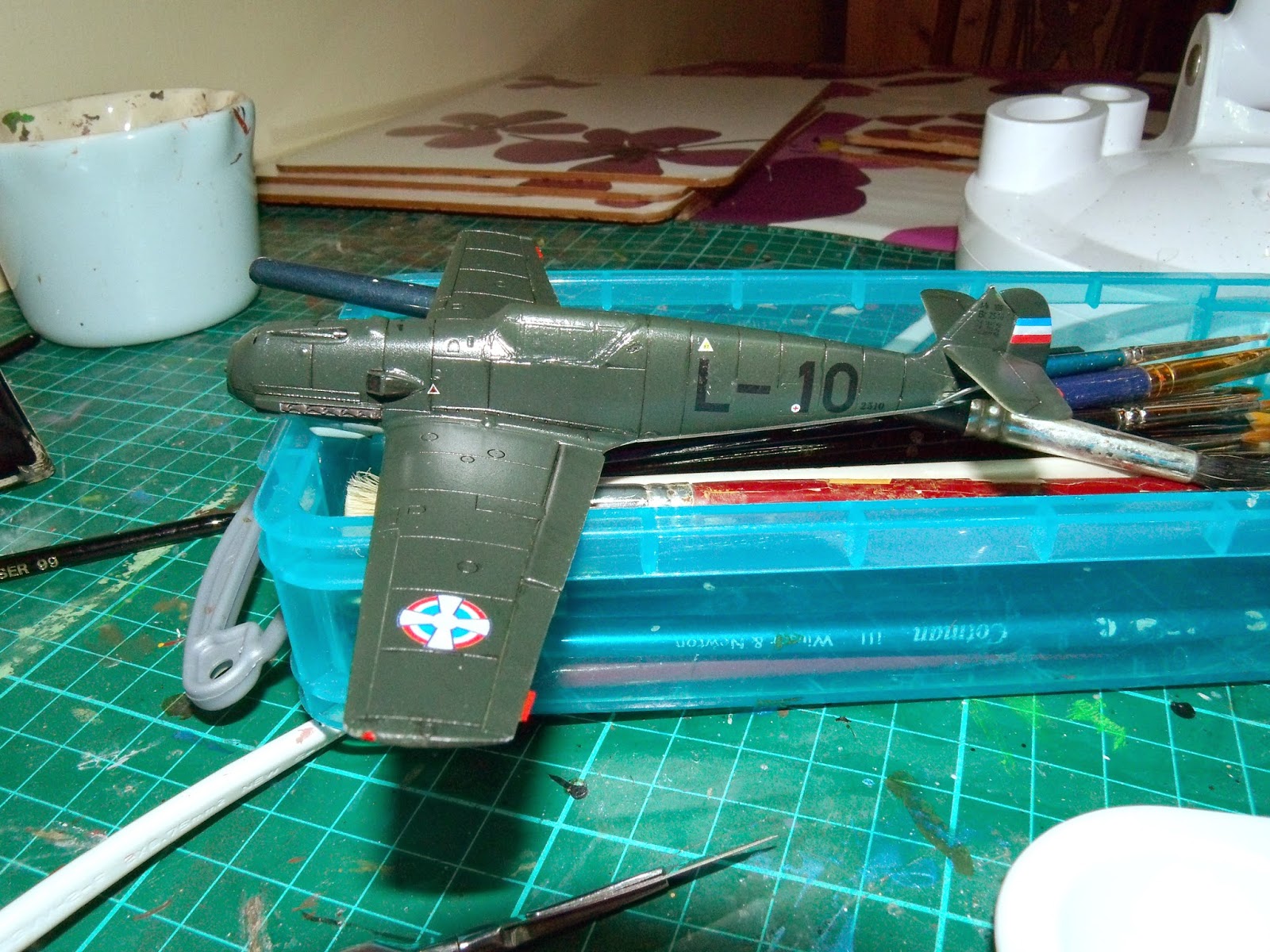 The decals are from a company called Kora (set  7234). They are thin, flexible and in perfect register, but the white is a little bit thin over RLM70. They're absolutely fine over the RLM65, but if I had a do-over, I would underpaint the upper wing markings and the tail stripes in white. After this, it was another coat of gloss to seal and then detail painting. Guns, trim tabs, landing lights and the like were done with a brush, as was the panel line wash, using acrylic ink. 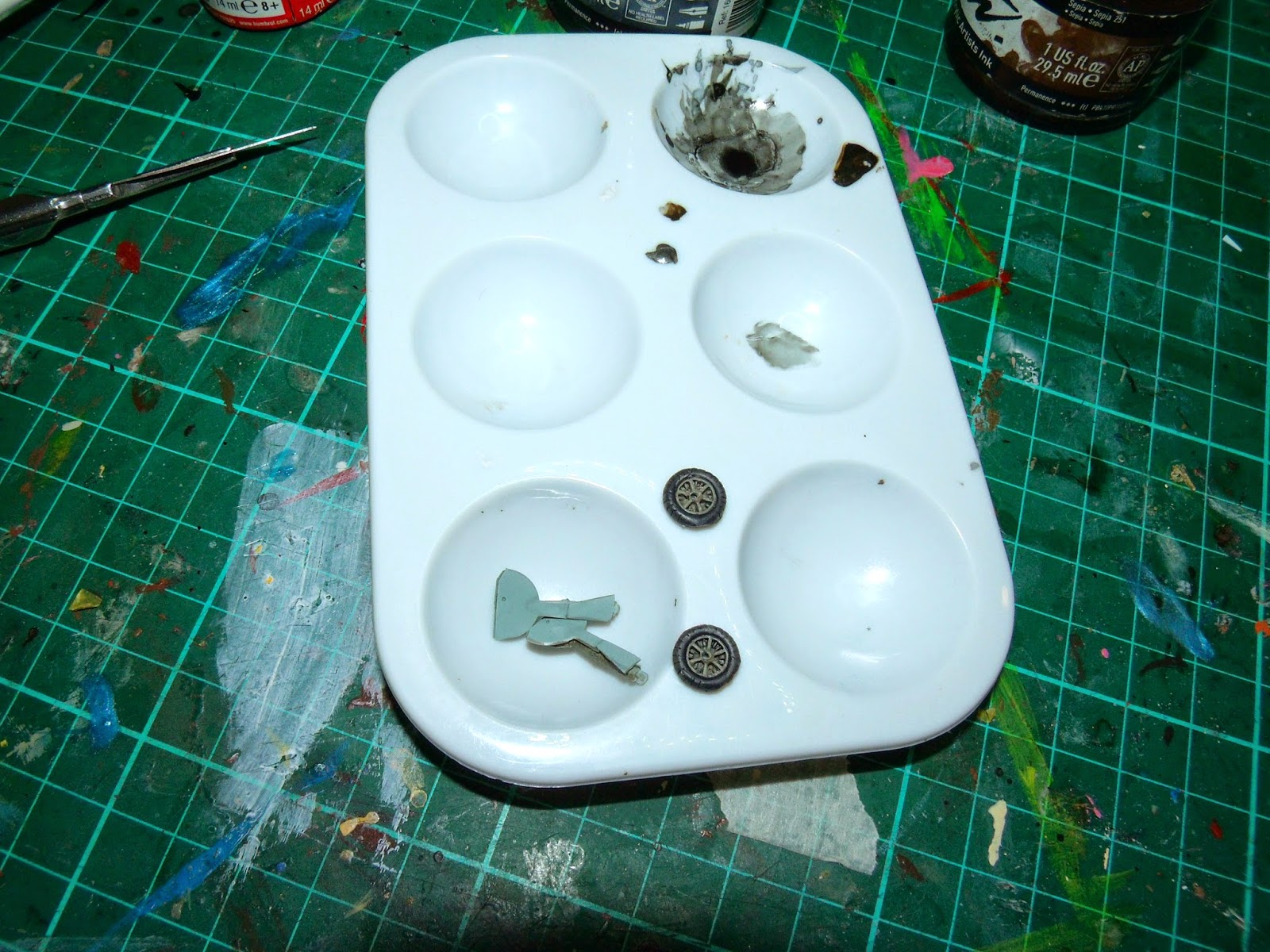 The wheels are resin extras that come in with the decals, and the detail is superb. 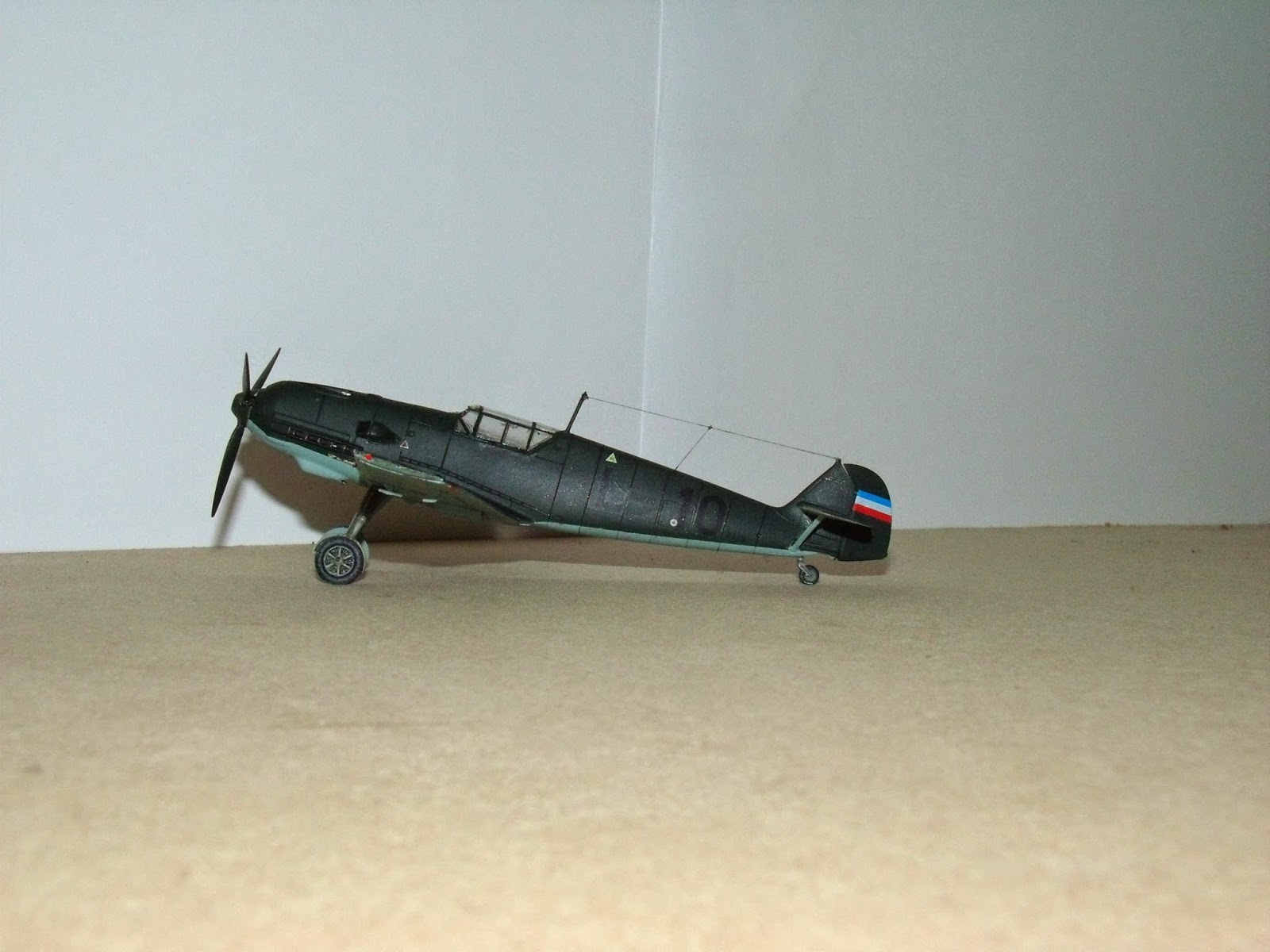 Here she is after the final addition of things like pitot tube, aileron balances and the radio aerial from stretched sprue, and a coat of matt to flat things down. 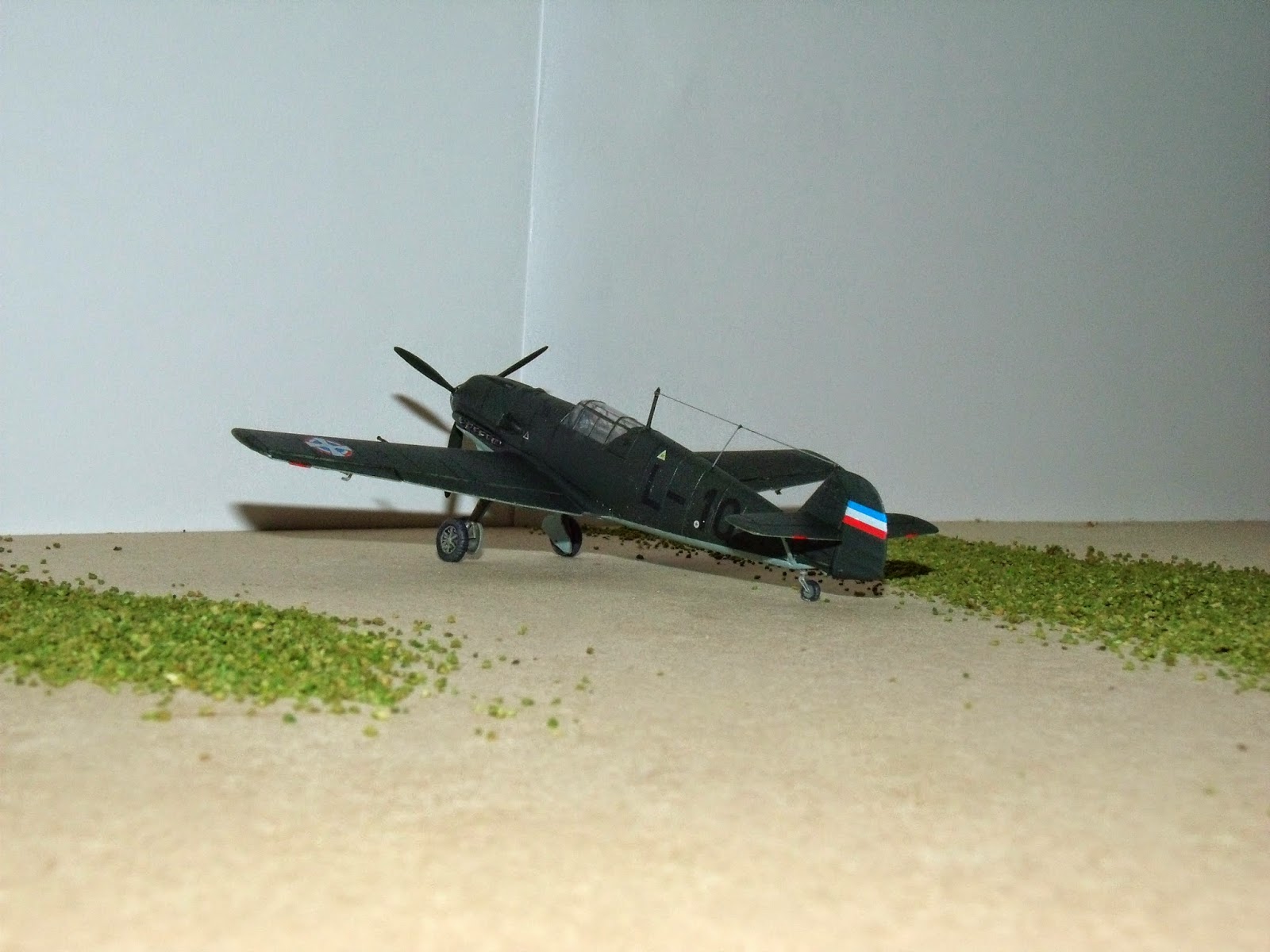 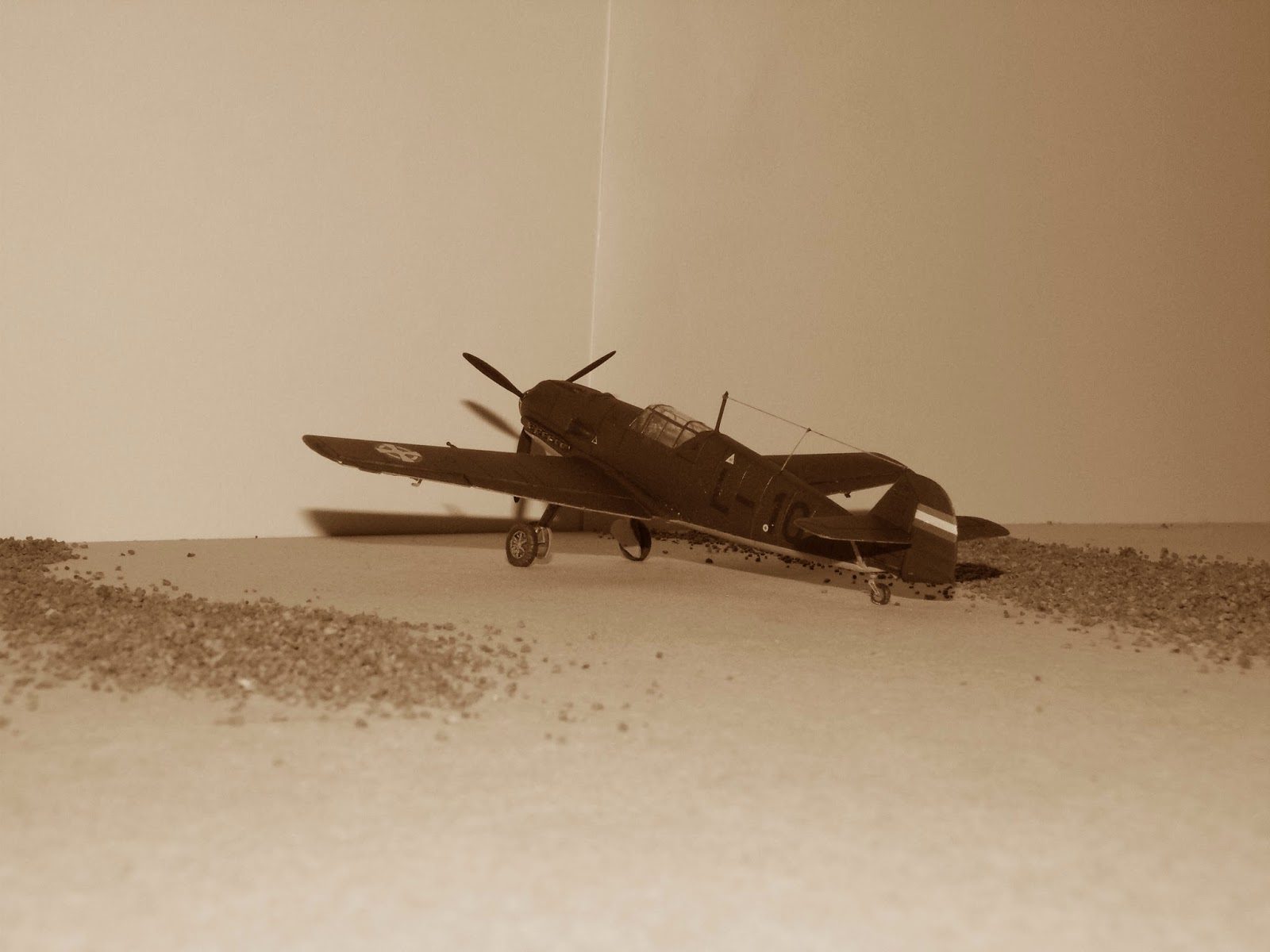 L-10 was part of the 142. Lovacka Eskadrila, from 32. Grupa at Krusedol airfield. Second Lieutenant Miodrag Aleksic flew the plane to score an aerial victory over a German Bf109-E (and at least one other kill) during the invasion in 1941.