Because I can! (Redoubt Enterprises Dragoon Horse Holder)

Do you have ever have a “because I can” moment? 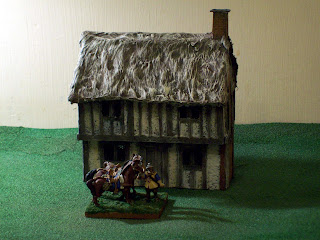 This was one. As far as I know there are no ECW rules where you actually NEED to have anything on the table to mark where the horses are when your dragoons are fighting dismounted. However, just because you don’t need it doesn’t mean you don’t make it.
Redoubt’s dismounted dragoons include a horse holder model. Actually, if you look at this boots, he’s actually a cavalryman, not a dragoon, but I didn’t let it stand in my way. Three standing dragoon horses from Redoubt’s range complete the component parts.
I mucked about a bit with the horses, mainly altering the position of the heads, to give the impression that they are moving, reacting to the noise and confusion of battle. The centre figure is the "original", and the two outer ones have minor changes to pose - mainly head position. The horse models are lovely, with nice anatomy and no flash. The saddles are festooned with bags, blankets and the other paraphernalia dragoons need to keep body and soul together in the field. They even have loose reins hanging down. 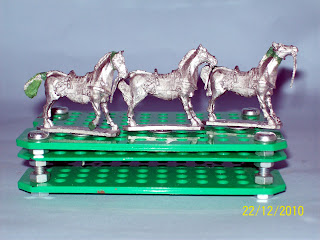 The holder is nice, and the anatomy is fine. The pose is quite “straight up and down”, but I think he looks the part of someone trying to keep three horses in order in a situation where they are inclined to be anything but calm. He wears a buff coat, and is armed with sword and carbine. By drilling out his hand, and bending the reins carefully, you can easily place everything in his grip, keeping the mounts in place until his comrades need him. 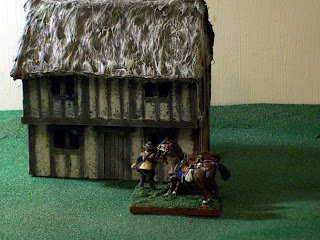 In this last shot, I have him with some other manufacturers’ miniatures, so comparison. From left to right, these are a Renegade foot dragoon, a Warlord metal dragoon officer and a TAG cavalry officer. 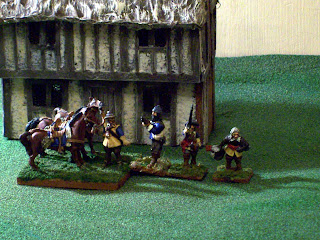 Despite the fact it will probably never grace a table, I really enjoyed doing this. Sorry the photos aren't better - I've altered the lights in the room I work in and I obviously need to re-invent the wheel as far as pictures go. I'll replace these when / if I can get it right.

This little set also illustrates a nice point that most rule sets gloss over: once dismounted, a proportion of the troops had to be told off to hold the horses, so a sixty man dragoon company might only put forty men in its firing line.
Posted by Mitch K at 21:05