This is the second part of my explanation of how to make houses for ECW gaming.
Here, I’ve dismantled the wall components after the dry fit and check, and cut out the roof sections. In this case I’ve used foamcore, but card, MDF or foam sheet are all suitable. It depends to some extent what sort of roof you’re trying to portray. Using foam sheet is better if you’re making a thatch, as the extra thickness is credible, but if you intent to portray a tiled or shingled roof, foamcore is better since the roof look more in proportion. 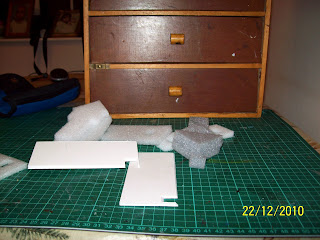 I’ve cut out the bits where the chimney will go through the roof. This can take a bit of fettling, but if the fit isn’t perfect, don’t worry, as the final cosmetic layer(s) of the roof will cover up the gaps.
Now glue the thing together. I use impact adhesive and dressmakers’ pins to provide support. Once the roof is in place, the whole structure is quite stable. Once dry you have a shell of a house, ready for the real work of making it look the way you want.
The next steps require large quantities of small bits of wood. Bags of matchsticks from craft shops are excellent, as are wooden coffee stirrers. The plans I’ve used build a house with what is called a “jetty roof”. Obviously in the real thing this has to be supported, so in this case I’ve added cross joists under the jetty from matches. 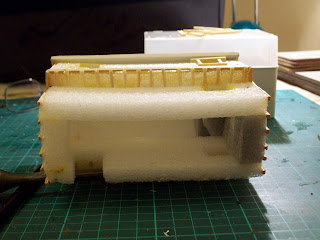 This next shot shows two things – first, the floor plate at the base of the upper storey. This rests on the joists under the jetty and ties the upper floor in. I’ve found the best way is to add the joists over-length, glue the floor plate in (in this case it’s a coffee stirrer), then cut the joists flush with a chisel.
I’ve also added the basis of the window frames, matchsticks cut to length and glued in place. 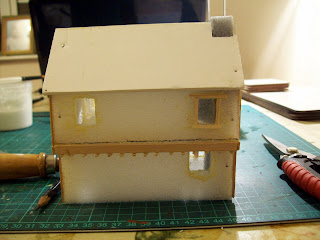 Now start framing. There are some good books out there on vernacular architecture that can guide you, and if you live near any historic towns or cities, an afternoon out can give you the impression of how it was really done. There are a couple of things to remember.
First, the timbers used in these buildings were cut directly from tree trunks / limbs, often on site. At best they might be cut with a pit saw. The beams therefore are often NOT straight, but were worked by the carpenters to fit the building. Look closely and the marks of sweeps and adzes can be found quite easily.
Second, the wood was often worked and used green, since it’s vastly easier to work something like oak when it’s green rather than when it’s seasoned. A consequence of this is that the buildings move, often quite a lot. A gap you can put your thumb in is nothing, and being able to cram a couple of fingers between timbers is not at all unusual.
So, if your timber work is a bit rough and doesn’t fit perfectly – you’ve got it right! Here are the two gable ends, for interest. 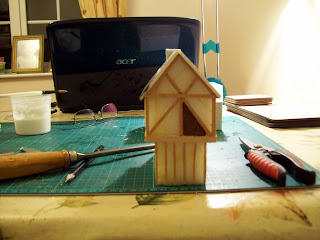 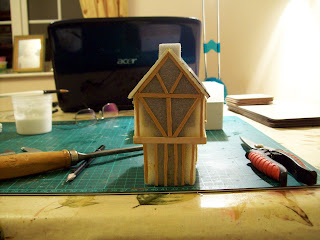