Just because I haven’t posted any updates doesn’t mean I’ve been totally idle! Every army needs artillery, so I’ve built up mine considerably, and here it is. 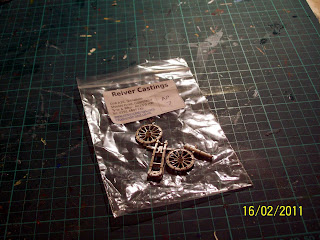 The new guns are Reiver Castings items, from the 17th/18th century range. I got these at a show from Under The Bed Enterprises, who were a couple of all round good chaps, very friendly and helpful. I bought two battalion guns (catalogue number AP7) and 12-24lb field gun (AP3). The kits are sold in the usual neat and natty little plastic bags, as shown here.
Each is a four piece model (carriage, two wheels and a barrel), cleanly moulded in fairly soft metal. Mould lines are prevalent, but there was no flash on either example, and cleanup was quick and easy. Reiver have made no attempt to cast wood grain into the carriage, which is no bad thing. Scaled up, most kit wood grain would make a railway sleeper look well-finished. The wheels are narrow and delicate, and benefit careful handling. The kit goes together with minimal additional fettling. I reamed out the wheel centres a little, and squared up the axle shafts, to try to keep everything square during assembly. 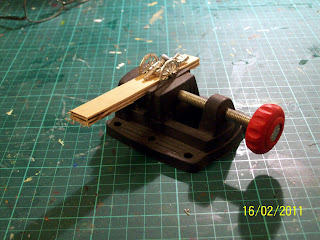 Assembling the things was a bit of a grunt. Everything fitted well enough after preparation, but it’s by no means simple to keep everything square and true while the glue sets (I used Araldite). I got around it by using small offcuts of wood of the correct width as jigs to support the wheels, whilst clamping the whole thing in a plastic drill vice. This is one of the battalion guns undergoing the process.
They look right based on illustrations. I wouldn’t care to speculate on their precise dimensional accuracy, given these come from a time when all artillery was bespoke, the concept is probably meaningless anyway. Colourwise, yellow, red and black appear to have been popular, although whether based on preference or availability is perhaps open to conjecture. Here’s one assembled next to a Warlord infantry ensign for comparison. 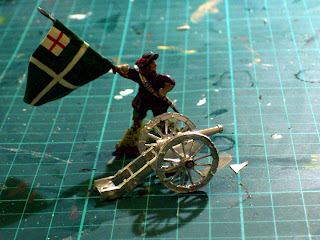