Finally, some heavy troops for the Picts! I had got enough archers, crossbowmen, javelin-armed skirmishers and light cavalry to run all over the table, but nothing that can actually get into a stand-up, drag-out fight and have a chance of winning.

No longer! Here they are, the original Hairy Mob! Fully armoured and heavily armed, these guys are going nowhere except right through your army... 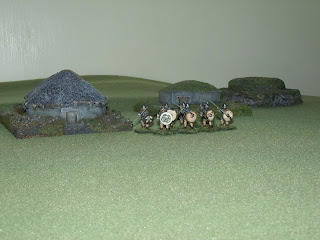 You want the village? Come and take it...


These are typical Crusader offerings: well cast with minimal seams and no flash, two examples each of four different poses. To give me a little bit more variety, I added extra beard to some of the already fuzzy hooligans, and altered a couple of the helmets (removed the nasal, to give an earlier look). No spears are provided, so these are home-made from steel wire. 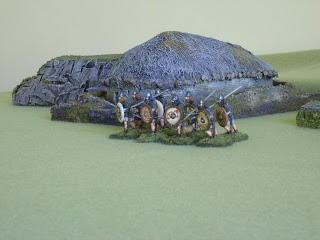 
These would be the toisech or thanes of the army - the one section of heavily armed, well-equipped nobles. As such they would all have been trying to be a bit different, so the shields all got a different design. These are all homemade decals, made as described in an earlier post here.

Any unit of elite / companions/ champions / whatever your game rules describe them as would be drawn from men like this. 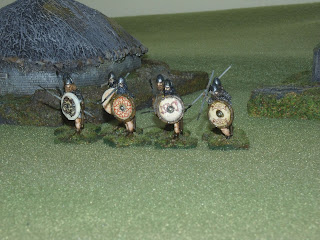 If you can see our shield designs...


The figures are modelled in a fashion that recalls the latter part of the Dark Ages, and so would be suitable into the era of the early united Scots kingdom and battles with Vikings as well as the fights with the Angles of Northumbria. 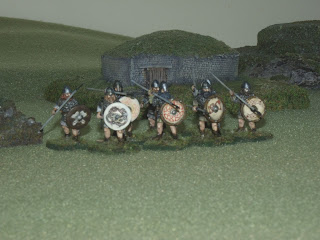 ...Then you are much too close!


Arguably they are too late in form for use in either Dux game (Brit or Bello), and would be anachronistic. I am not greatly bothered. Arthur and Aelle can  both expect these guys to make their lives uncomfortable in the future.