Pictish Raiders - Lock Up Your...

With this lot about, lock up your everything! Then nail it down too!

You do NOT want to mess with this lot!

These are the four groups of Pictish raiders for Dux Brit (also suitable for Dux Bell, WAB and SAGA too!). These are typical non-noble/elite warrior types, so no/limited armour, and hand weapons. These minis are a mixture of Gripping Beast, Newline and Black Tree sculpts. I am still kicking myself for not buying enough Pictish spearmen from Miniature Design Studios before Caliver absorbed them (and the price went up!) to build a WAB army, as this would have given me MORE than enough for this project! 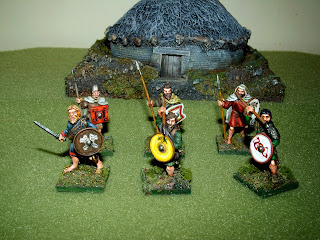 In a few cases, I swapped the heads for new metal ones from West Wind or plastic Saxon Gripping Beast examples. I added additional hand weapons on those that needed them. 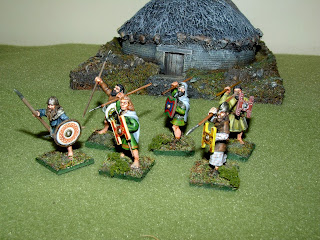 Axes were from metal rod and greenstuff, cut in so that they sit in the belts, and swords (scabbards, really) were lengths of brass strip, and greenstuff for hilts, throats and chapes. I found this quite easy, as you can model the whole thing supported by the body of the mini, rather than trying to sculpt in thin air. 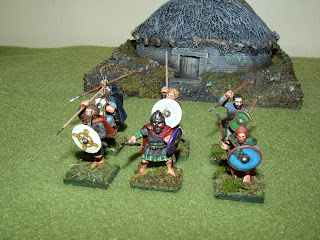 
Tartan, in the modern sense we use the term seems to have been a product of the eighteenth/nineteenth century, but there is a body of archaeological evidence of the use of woven patterned cloth back to the Iron Age in Scotland, so I don't feel there's any problem with a simple check pattern here and there. Since these are not the richest of men, the patterns and colours are generally muted, but a bit of splash here and there seems fine, to show off the wealth they have swiped from other people. 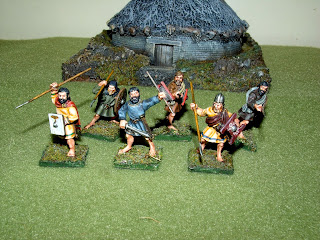 
This nasty bunch were designed for a career making life hard for Arthorius and Aelle in Dux Brit, but will be available for Dux Bell, WAB and SAGA in the future. With neighbours like these, no wonder Hadrian built that ruddy great wall! 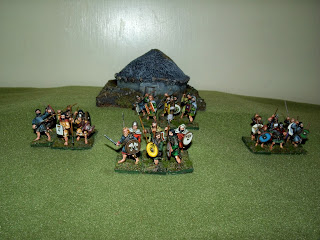