Raiding The Church of Saint Caradoc the Disappointed - Again!

Aelle had run short of money again, so decided to raid Saint Caradoc's again. Well, after all, those peasants must have been fleeced of their money to buy some new valuables for the altar by now! And so, Saint Caradoc's quiet is disturbed again by fighting and killing.

This time around, Jeff took the Britons and I took the Saxons. Aelle's morale was a bit brittle, but Arthorius was nicely confident when he took the table. 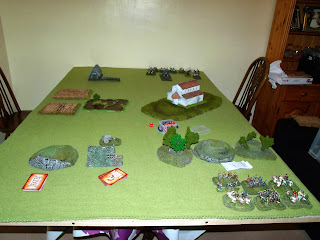 My Saxons got three free moves at the start, and started crossing the very rough terrain  towards the church. I started a precedent for the night by rolling very, VERY low, and so was admiring the view in the hills while Jeff reached the church with Arthorius and the knights. 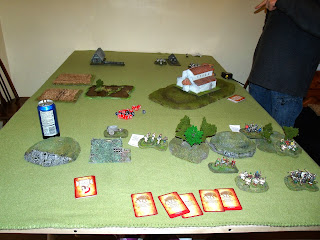 Where did that extra terrain come from?

Jeff hunkered down in the church, and try as I might I could not force my way in, or winkle him out, despite a couple of rounds of hand, but totally inconclusive fighting! A massive scrap developed on the edge of the hill close to the edge of the swamp. Jeff ground my force of warriors down, with the missile troops on both sides not doing much. 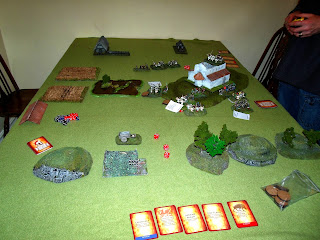 Come out and fight!


Jeff brought the rest of his troops up and threatened my growing force assaulting the church. Arthorius acted more like a general than  a warlord, directing action outside from within the safety of the church. Aelle drove off Bedwyr and the British levy, who withdrew in good order. Appaling low rolls on my part meant several charges just didn't connect! Aelle had sustained some losses, and these became critical, when just after this picture was taken Arthorius sallied out of the church. 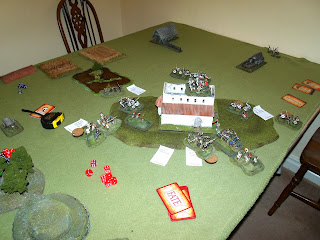 That's seen off the rabble!

Arthorius drove off both Saxon elite groups (who lost their amphorae), wounded Aelle and elsewhere Cei routed a unit of warriors. Cerdic and Sigebehrt could only look on as the army crumbled! Saxon morale collapsed and Jeff won a victory.

Neither side lost many men, and after adding up victory points, we had an odd situation. All through the game, I had struggled not just with low dice rolls, but also with having almost no attack-based Fate cards. This meant that at the end of the game, I was holding four Retreat cards which didn't do me any good at all! I should have scarpered when I couldn't get Jeff out of that church. Alternative answers on a postcard please... Well, a good night was had by all, and it'll become a regular thing.