Village Raid - A Dux Brit Game, With a New Player!


I managed to drag my mate Jeff around to have a go at Dux Brit. OK, let’s be brutally honest. We neither of us needed much dragging, but finding a time we could both do was a challenge! Jeff is a former rolegamer/fantasy wargamer, but hadn’t played in donkey’s years. A small army, rules-light knockabout game like Dux Brit sounds ideal as a way back in.

As an aside, the other game that seems to work well for this is Gripping Beast’s SAGA. I’ve watched Darren do numerous games with people who have never played before and it runs like a watch and all involved have a great time. SAGA is on my to-do list!

As Jeff was a new player, we set the table up by randomly rolling for the location of large terrain features and scattering the small ones randomly. 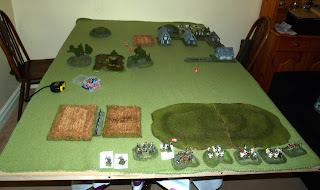 The scenario was the village raid, so the village was set up with five buildings (two houses, barn, granary and pigsty), plus some fence sections. The village we live in is mentioned in the Domesday Book, and is in an area full of evidence of habitation back into the Bronze Age and even the Neolithic, so we could convince ourselves this is actually home turf. Luckily we're both incomers, so neither of us needed to feel they were betraying their direct ancestors with their choice of army!

Jeff took the Saxons, and I took the Britons. Jeff got four initial free moves and was into the village and looting by the time theBritish arrived. The British entry point was right at the edge of the village, so it almost immediately turned into a serious slug-fest, with all the better quality troops from both sides going hammer and tongs while my levy milled about and did nothing useful. 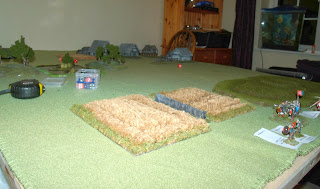 Jeff's eye view of the start...


My elite troops were having the best of it until Jeff pulled a fantastic trick: after a short retreat, he charged full-tilt at my elite troops with two grouped units of Saxon warriors, playing a Carpe Diem card and THREE "Strong Arm" cards in one go. Despite the Saxons being depleted before they started, in one brief turn of combat my elite went from ruling the table to losing their amphora. I don't think they've stopped running yet!

Shortly after this, the Saxon's morale collapsed, having lost several units and a noble.  Although this granted Arthorius a win, Jeff's skilled handling (especially that bit above!) meant Aelle was able to withdraw in good order having inflicted heavy casualties, so game ended in an expensive, hard-won marginal victory the Britons are unlikely to celebrate much.

We were enjoying it so much I didn't take any more pictures though! Oh well!