I want a Strathclyde force for Saga. This is a very largely mounted force, and putting about thirty horsemen on the table can be an expensive option, so I looked around for ideas to build this force economically. I can convince myself that there is some versatility in this force by using it as reinforcements for Dux Brit (whether as British or Saxon core units, or as Germanic mercenaries).

I liked the look of Wargames Factory’s Ancient German Cavalry as the source for these troops. Twelve in a pack for about fifteen quid (at the time) was good value, and fully dressed (tunics and trousers) make them suitable for converting to other things.

I’d heard very bad things about WF’s products, so I was loath to buy these sight unseen. At Vapnartak I was able to pick up and look over a pack before I put my hand in my pocket and although you can’t do a complete review under these conditions, I was happy to take a punt.
You get eight sprues in a pack, four each of horses and riders, with three figures per sprue.

First, the horses. These are kitted in halves, with separate heads. You get three sets of bodies and four heads on a sprue, so the potential for variations is very large. Anatomically, I am happy with the models. Positions, poses and musculature all look OK, and the eyes are in the right place! These seem to be based on a shorter-legged, heavier-boned, more barrel-chested animal than Conquest Miniatures plastic horses. I’m pleased about this. 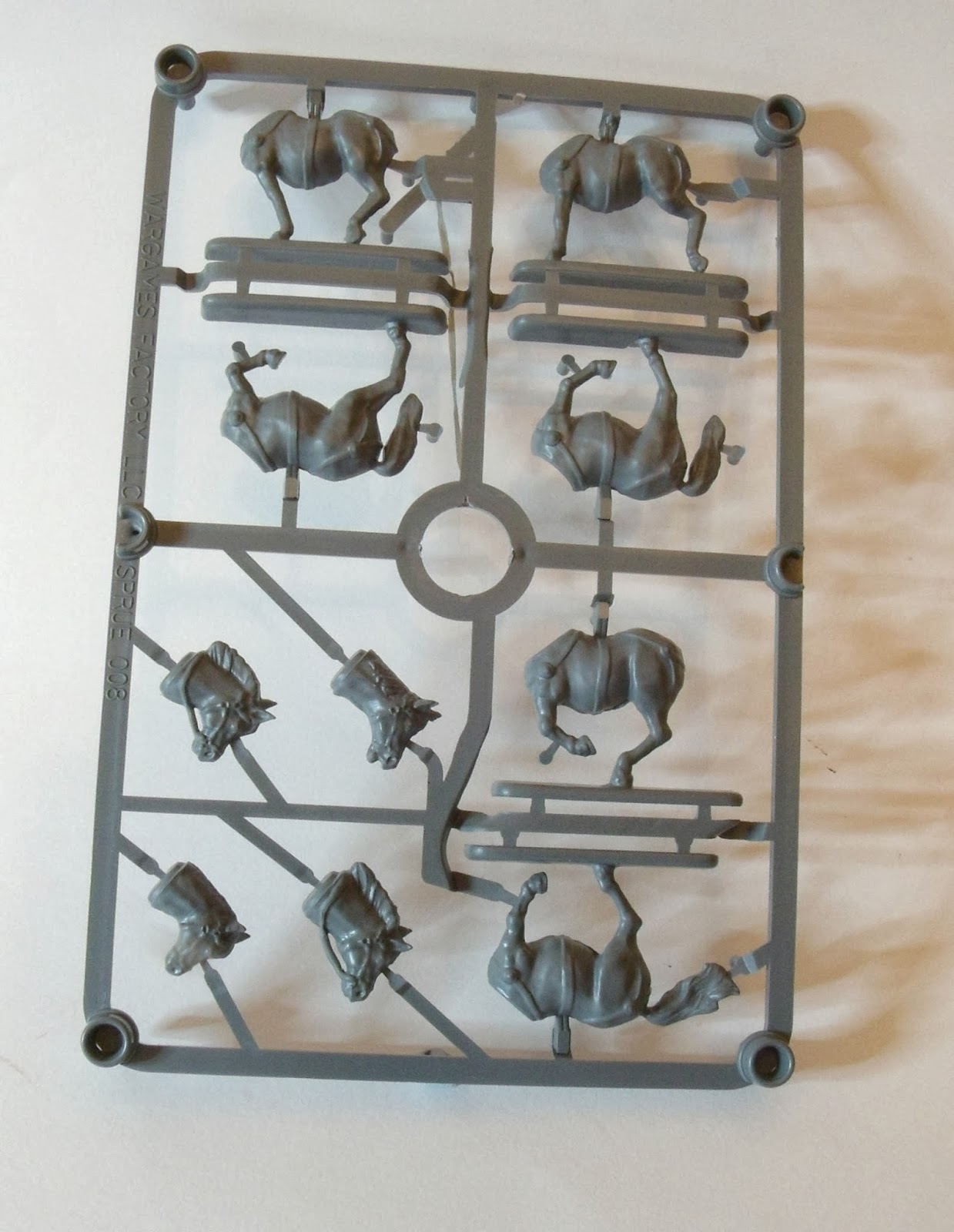 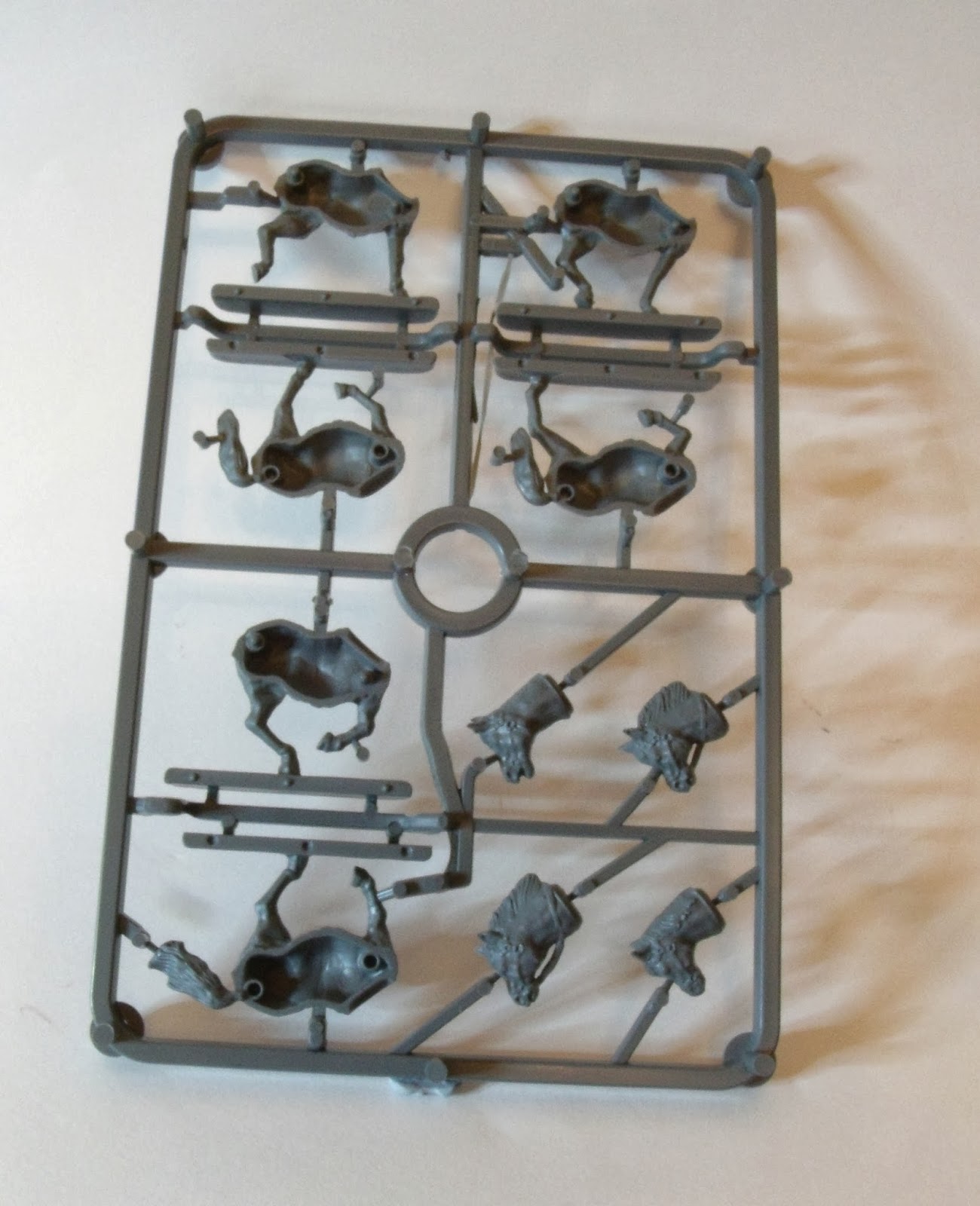 The heavy-limbed "pony" phenotype is much more appropriate for Dark Age/Early Medieval context that the more improved breeds that Conquest use. Assembly is simple, and although the fit of parts is imperfect, it’s as good as that I’ve found with either Conquest or Warlord horses. The horses are modelled with simple bridles, a single girth and fore and aft saddle straps, of the type seen on reconstructions of the four-horn saddles associated with Roman and post-Roman cavalry in the pre-stirrup era. The saddles (on the figure sprues) fit extremely well onto the mounts.

The riders are kitted as bodies with the shield arm moulded in place, with separate weapon arms and heads. First of all, the riders fit beautifully onto the horses without lots of cutting and grinding (which is a novelty!). The figures are of a slighter build than GB plastics (or metals!) but are perfectly fine, close in shape to MDS Picts. 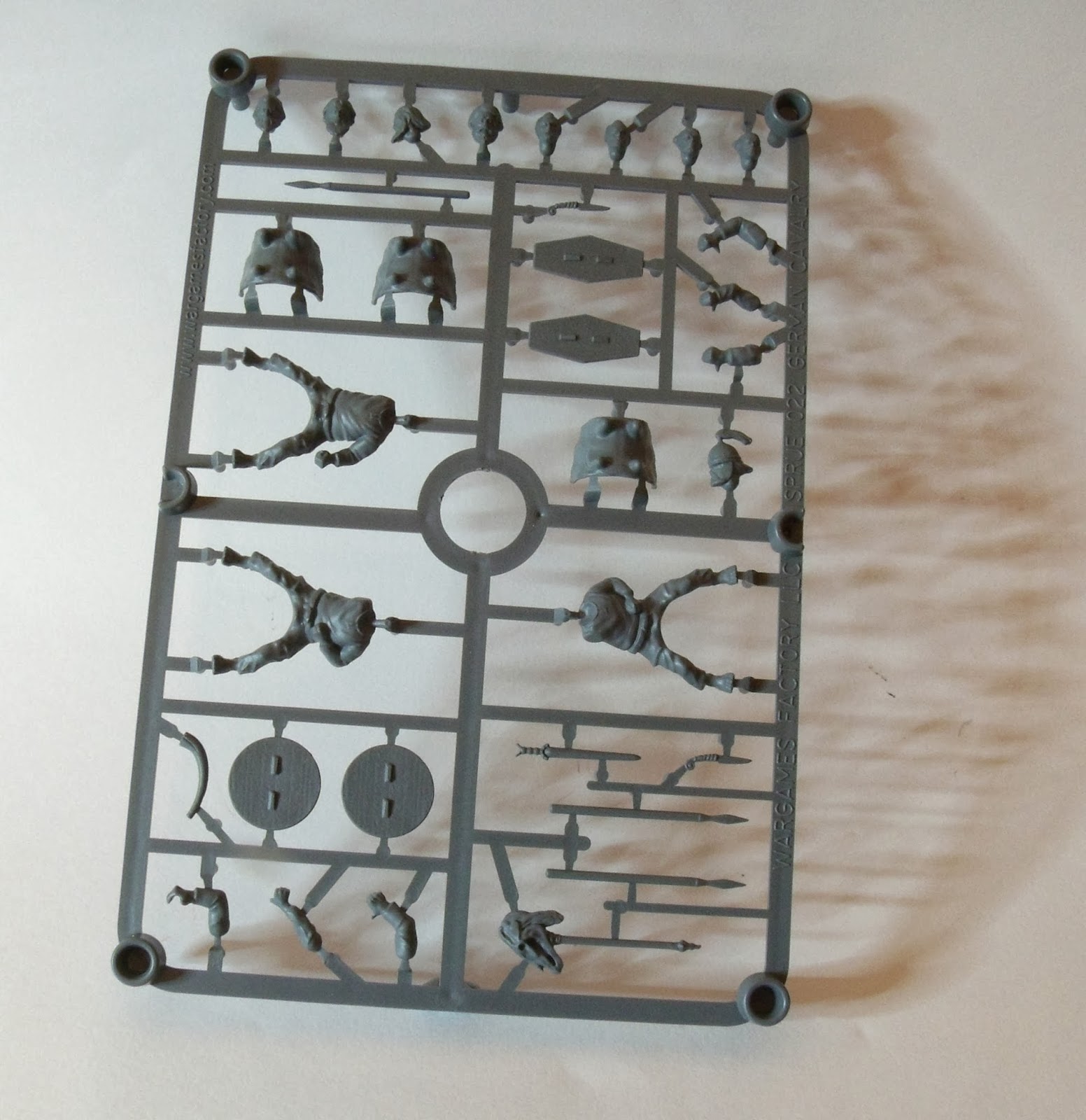 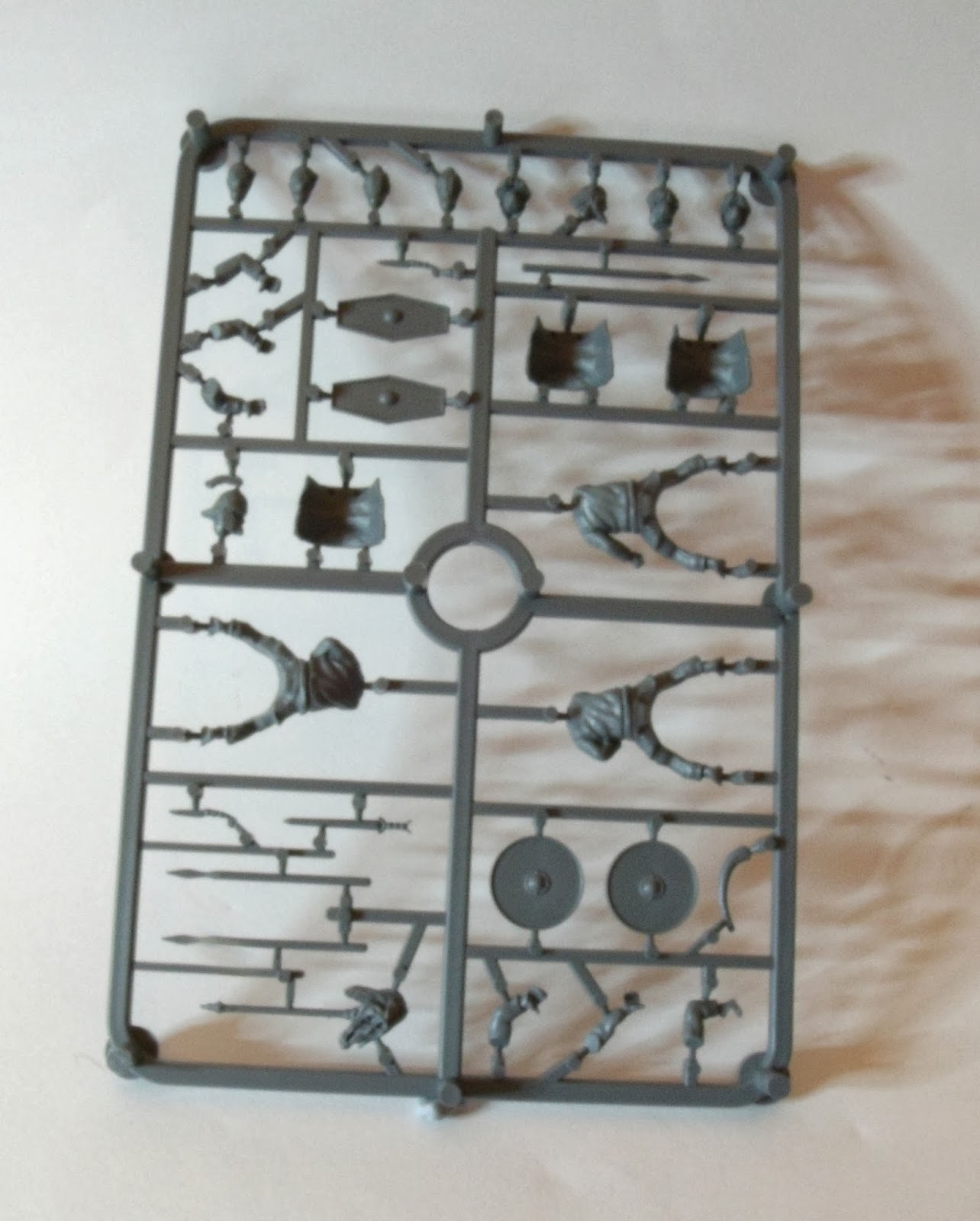 Each sprue has three bodies, six weapon arms and NINE heads! Four have their hair in versions of the Suebian knot, one has an Imperial Roman-style helm, and the remaining four are generic beardies suitable for a wide variety of end uses. The sprue carries three short spears, which are useful, swords and knives which can be adapted (they are too early in style for my purposes as they are), two round shields and two hexagonal ones, the former great, the latter for the spares box, plus a horn and a horse skull standard!


Despite the slight dimensional differences between WF and GB plastics, GB heads seem to work with these figures to add some additional variety or to up-armour your riders with helms. The only issue is that GB put the socket for the join on the head, WF put it on the body, so a bit of work is needed to bridge this. I used a bit of scrap sprue.

A few dry fits suggest that weapon arms from GB Dark Ages Warriors will match up, immediately giving a further source of weapons and even more variation.

Casting quality is good, and the plastic is a nice, soft grade (less brittle than Renedra use for the GB figures) which is very easy to work with. Fit of parts varies - issues with the horse body halves are noted above, but the riders go together seamlessly. Cleanup is quick and easy - limited mould lines and no flash anywhere.

The sculpting is generally good. I like the folds in the clothing but some small details (hair, fingers,eyes) are quite "soft". However, I think it's fair to point out that many metal miniatures I've worked on suffer just as badly, but that anyone expecting Musketeer Miniatures quality is going to be sadly disappointed.

Here's one example I've put together quickly. He will need a little bit of greenstuff to sort out the head/body joint, and the filler on the horse sanded down (obviously!) but I think it shows the principle. 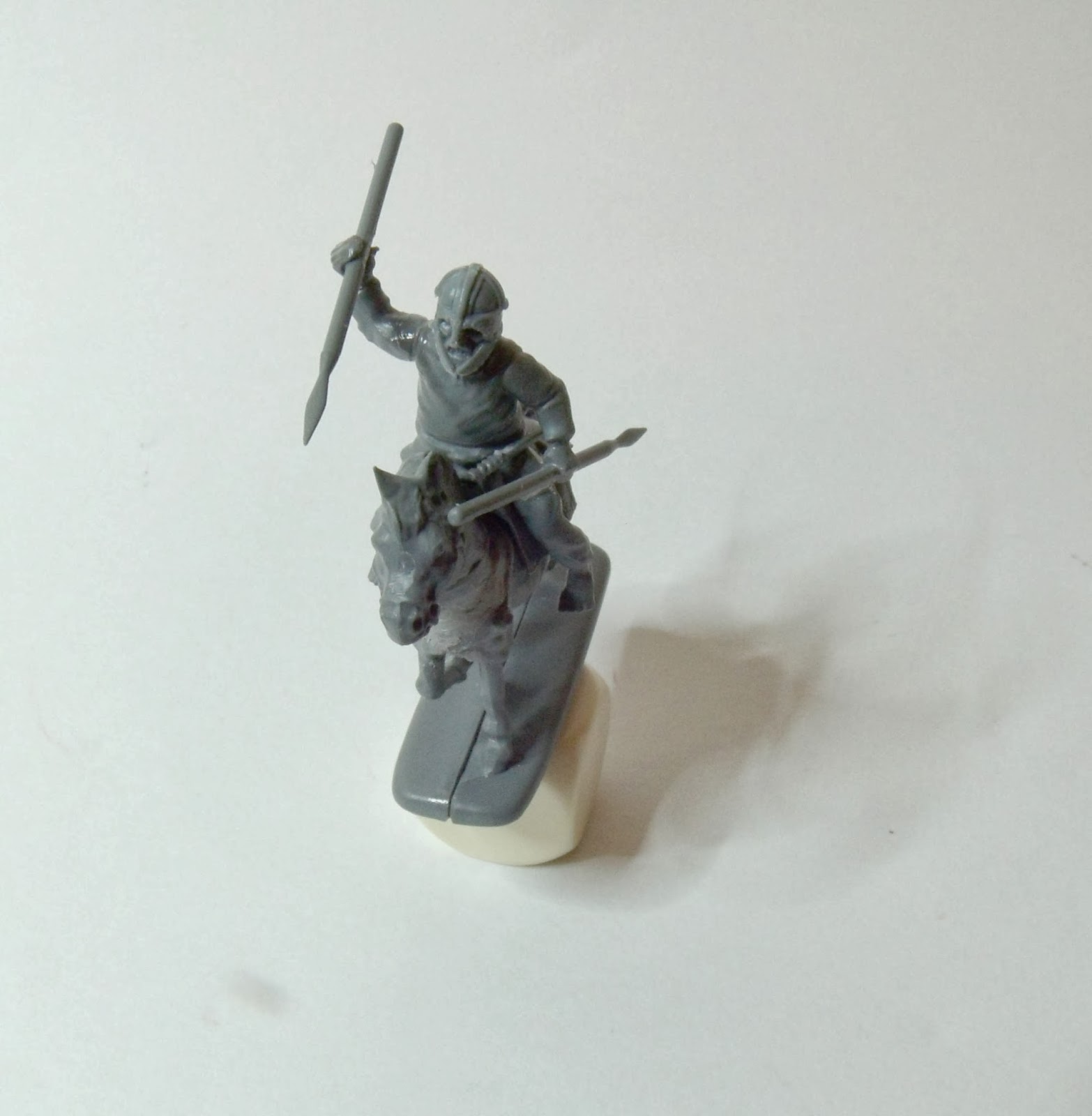 I'll post again once I've got some painted up. In the main, I would say I'm happy with these. They are perfectly capable of putting the force I want on the table at a very reasonably price, and I reckon they will look the business when they do. These don't fall out of the box and assemble themselves - they need a bit of work, but I like that work!