Well, I never thought I would get to one hundred posts. Three or four maybe, but not one hundred.

As regular readers know, I have ambitions to be the cheapest modelmaker on the net. So, here we have my take on making trees on the cheap. Given the underlying theme of stinginess and skinflinting that has underlaid  this blog, I thought something like this would be totally in keeping for my one hundredth post!

Now, trees are not expensive, not on a per-item basis. If you just want a few, somewhere like Minibits is the place to go. There stuff is really, really nice, reasonably priced, and they are VERY nice people. The trouble is that you might need a LOT of trees. For a piece of terrain two feet by one,  (as per Dux Brit rules...) that might potentially be up to a couple of dozen of them. That number of trees starts to come to serious money.

This is a roll of MIG welding wire. This is a gash one, it’s rusty and won’t feed so I picked it up for nothing. They retail at about five quid, for roughly 200m of wire. Now, this stuff is very stiff, springy and unyielding. Great for feeding through motor driven welders, but not for much else.
So, a metre of wire is two and half pence. Keep that in mind – it’s important. Six metres of wire, say 15p total? 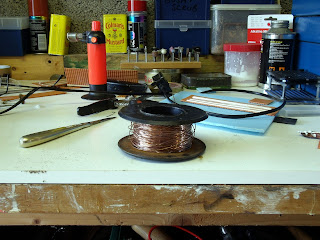 Now, a few seconds with a blowlamp, heating the wire red-hot and letting it cool slowly anneals the stuff so it twists, bends and flexes, becoming malleable and ductile. Heating five or ten metres of wire in one go is the way to go. A few pence worth of gas is all it takes. 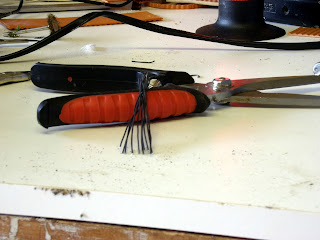 Cut the wire into roughly 10cm lengths, like this. Mount the whole lot in a vice and start twisting! Let out some filaments as you, to provide branches as you go along. Squash the end down to make a sort of “spike” to get the thing into the ground. 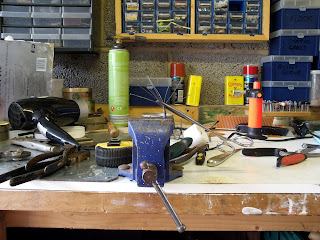 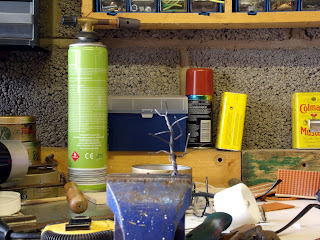 Until it gets tree-ish!

Now, mummify the whole thing with masking tape. Watch it, this is a nasty prickly job! A metre of tape will do half a dozen trees, so call that roughly two pence worth. Are you keeping a running total? 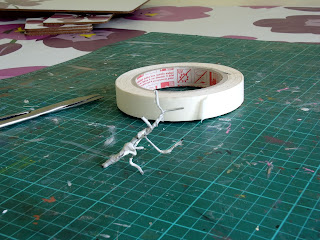 
Give the whole thing a coat of something to add texture. This is acrylic modelling medium, a quid a tub from Lidl. You could use PVA mixed with sawdust otherwise. Adds less than a penny to the cost of the build. 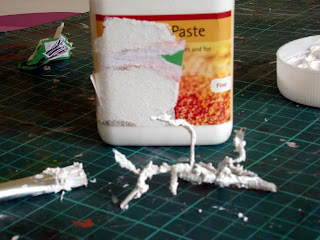 Roughed up a bit.

Paint everything your favourite shade of mud/chocolate/bark/other substance brown. I use emulsion match pots, and all the half dozen trees uses about a penny’s worth of paint. 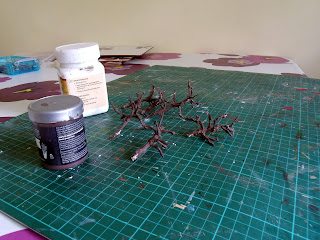 Drybrush with lighter browns, greys and bit of green to represent moss or algae. Less than a penny. 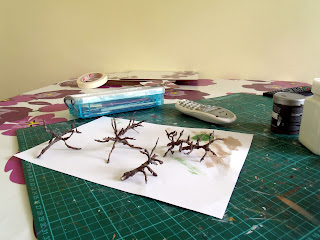 Bring out that texture!

Liberally dabble all the branches with suitable glue, whether impact or PVA, and add clump foliage. This is where the price goes through the roof! The bag of clump foliage cost six pounds, and I think I’ll struggle to get more than fifty or sixty trees out of it! So, ten pence per tree to the total. Keep adding up! 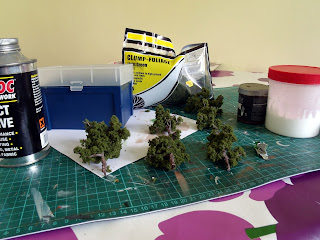 Once the glue is dry, mount all the trees on a block of wood or a bit of waste foam, and give the whole lot a spray with diluted PVA. I buy PVA at the builders' merchant's, five litres for nine quid, so my 5ml costs less than a penny! Diluted out in my spray bottle, it’s simplicity itself. A line of PVA and some flock give you ivy up the trunk if you want... 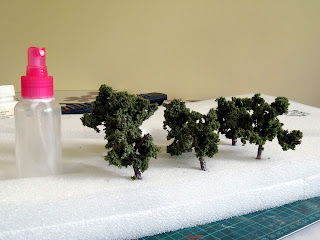 A coat of matt varnish dulls everything down and finishes the job.

OK, so let’s recap. Fifteen pence worth of wire, two pence each for gas and tape and three pence worth of paint, comes to 22p for the painted armatures. Add SIXTY whole pence for the clump foliage, and a penny’s worth of PVA. We’re up to 83p all up. I’m going to be horribly pessimistic and round it up to an eye-watering 90p to include other costs (matt varnish, impact adhesive, etc). We have six trees for 90p, or 15p each. Cheap enough? 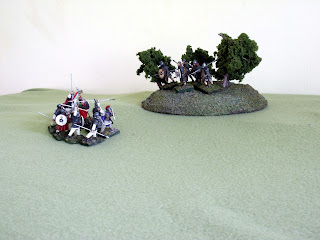 Here they are in situ. Drosten, the Pictish noble are pulled his remaining elite warriors up onto a small wooded hillock, pursued by Arthur, Gawain and Arthur's companion infantry. On the whole, even with a bit of a bonus for cover and elevation, things are not looking good for Drosten... 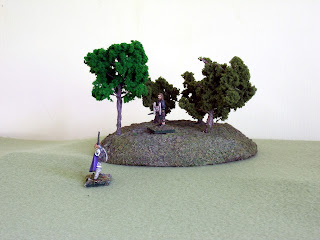 
So he's managed to persuade Arthur to settle it man to man, and Drosten's infantry have scarpered before Arthur changes his mind! The lighter-coloured tree on the left is a Minibits tree. I think the different trees work well together, different species growing naturally.