Something A Little More Complex - A Sub-Roman Church, Part 2

With a church shaped wall outline, it was (I thought) a case of cracking on with decor and a roof!

And then Red Orc, over at the Lead Adventure Forum, said "...it should really have an apse. That's pretty much the mark of a church in the late Roman period in Britain, I'd say... British churches practically demand apses, as they do have late Roman models"

I found his arguments (that above is the edited highlights - for the full discussion, go visit) compelling. So I added an apse. To do this, it was off out to the big workshop. This was too much work for my dining room table, needing big vices and such like.

The basis of the apse was a plastic bottle, about 40mm in diameter. Standard plastic waste pipe is about this diameter, but I didn't have any offcuts on hand, so this bottle (surplus due to the lack of a lid) stood in. 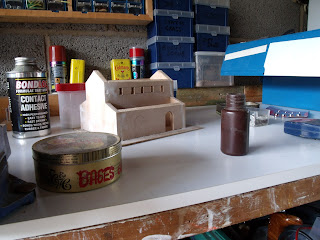 A church, and a bottle.

The top and bottom get cut away with a hacksaw. The cuts are inevitably rough, but I'm not too worried. 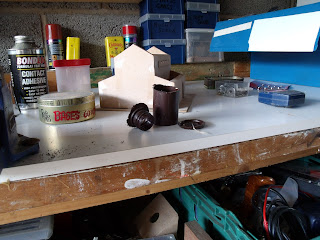 Even I can't find a use for the top and bottom!

The resulting tube is cut into two pieces, along the conveniently provided lines, using shears. 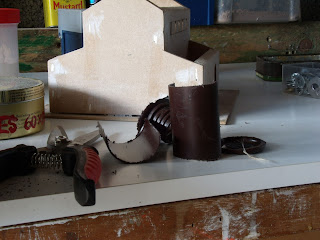 The position of the apse is marked... 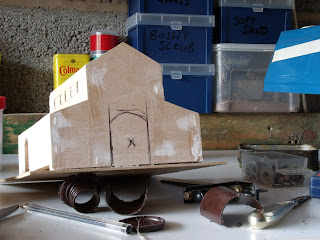 ...And a couple of large holes are made through the wall of the nave of the church.

...Where you DON'T drill the holes!

Next, the aperture for the apse is is cut out with a fret saw (my least favourite tool!) using the holes for access for the blade, then neatened up with a round rasp. 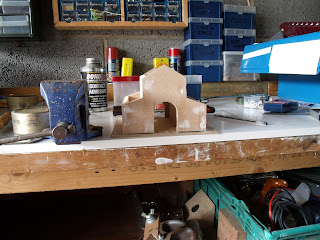 After roughing up both sides of the plastic with some VERY coarse sandpaper, the plastic is fixed in place with cyanoacrylate. 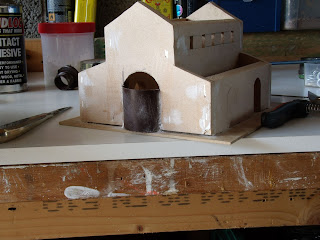 Now, the kicker is obviously that the rest of the walls are 9mm thick, and the apse is about 0.8mm, which stands out a bit. How to add the thickness was a bit of a poser. I toyed with gluing on some wood or plastic battens and making up the thickness by plastering over it with one strike filler, then decided to use extruded polystyrene foam.

Blue foam like this is obviously a great substrate, having a decent thickness and being easy to paint, scribe and so on. However, it isn't very keen of taking on cylindrical shapes - at least not in this thickness. I tried scoring and bending, with no success, before forming it to shape using the old hairdryer in the picture. This was cast off as "broken" at some point, but was repaired and now serves in the workshop! The heat does collapse the foam a bit, and I found I needed to be careful to get enough heat to make it flexible without going totally flat. The one here is only about the third go! 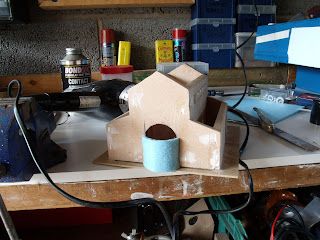 Now the walls are thick enough!

The scheme for adding an apse was not much different to how I would have done it had I decided to add one at the outset. It was just more difficult as an afterthought!

After this slight interlude, it's on with the rest of the construction!