Something A Little More Complex - A Sub-Roman Church, Part 3

Right, before going any further, I must give a shout out to Tom, over at Tom's Toy Soldiers. He is building a Sub-Roman church more or less in parallel to mine, to a different plan and using different methods. And a lovely job he's making of it too I say! Go over and have a look - and gasp in awe at the size of HIS apse! Oh er missus, titter ye not! An apse that size is NOT a tittering matter!

Anyway, innuendo not withstanding, bare MDF walls are a bit too smooth to be convincing, I think. You could wet plaster them, or use a paint / glue / sand mix, but I prefer to use a layer of tissue.

This is heavy-grade industrial wiping paper (for HANDS, not anything else!) Paper, PVA, brushes and scissors are all you need. 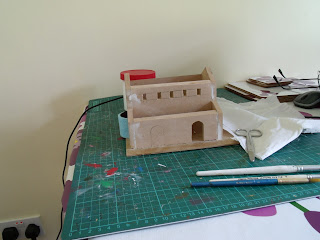 All you need, ready to go!

Prime the wall with PVA, apply the paper and wet it down with a good layer of further PVA. Once it's totally dry, cut out the doors and windows and trim the edges. Right, talk among yourselves while I do all the other walls (inside and out). 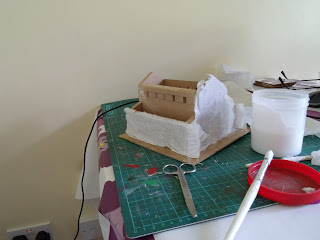 Plenty more to do!

Well here it is, all done finally, with the windows cut out and some slivers of waste foam glued at the foot of the walls to give a sense of the building being IN the ground and built up, not just plonked on the site as an afterthought. Even if it IS an afterthought! 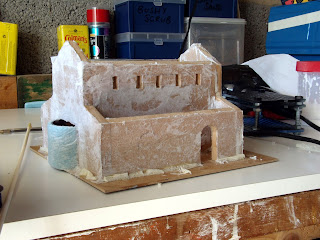 A bit of sand around the bottom of the building gives the basis for the outside groundwork. This is messy and has a nasty habit of getting everywhere, so I decided to do it now. 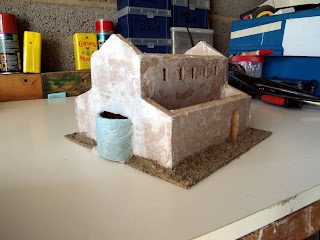 Bit of groundwork never hurts. What a skinny little apse!

Now, a roof. Tom has decided to thatch his - a nice option but I've got plenty of thatched buildings. I didn't fancy shingling the roof. The Anglo-Saxon Great Hall rather curbed my enthusiasm for shingling! So I went with a truly Roman option - tiles. I gave the building a coat of matt black car spray inside and out before going any further, then went out and bought a pack of Wills OO gauge scenics pantile sections. A quick measure up revealed that the four bits in the pack will do all of the flat roof sections. However, by adding the one spare bit I had in stock, it makes the number of joints more manageable! 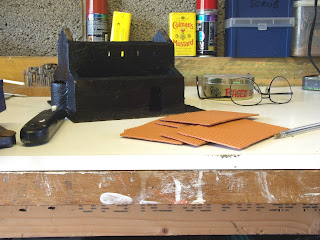 I ended up with two pieces per roof section. These two bits are fitted dry, to give an idea of how the finished roof will look. I think it will work perfectly well. 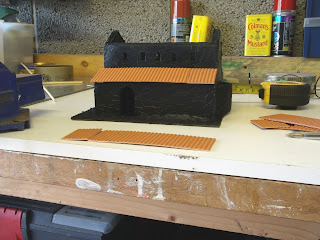 How the roof will look - eventually!

Well, that's enough to be going on with.