Knights of the Round Table - Sub-Roman Elite Companions

The first, and best, bit of Arthur's army is here!

These are the elite companion troops. The best of the best, true professionals, fully armoured, heavily armed and uniformly dressed. Not withstanding the scarcity of any actual evidence for a real Arthur, never mind him having a Round Table, or any knights to sit around it, any Sub-Roman warlord worth his salt would have had a strong elite guard around him, and it would in all probability have taken this form. So, this represents the nearest thing to what any historical version of the Knights of the Round Table would probably have been, a set of troops like this. 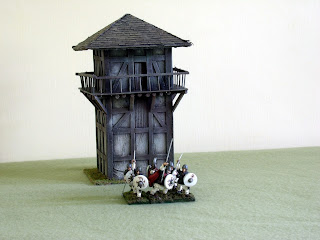 These are West Wind armoured Sub-Roman spearmen, built straight out of the box, except for the spears. These are home-made from annealed 0.7mm MIG wire. 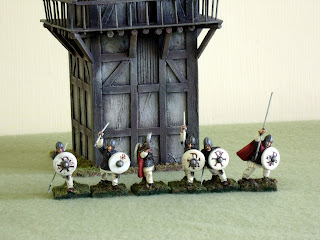 The shields have chi-rho symbols, some large, some small, in different colours. These were made the same was as before, as described here, using copyright free chi-rho designs from around the internet. 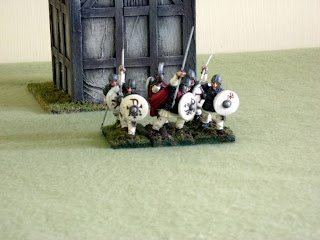 There are plenty of people who will scream that there is no historic evidence for chi-rho symbols on shields. Well, there's barely any evidence for Sub-Roman shields, given the lack of inhumation goods in Christian burials. However, we are happy to accept the warriors actually did carry shields, and that there were SOME sort of designs on them, so why not these? I'm content with them, anyway. 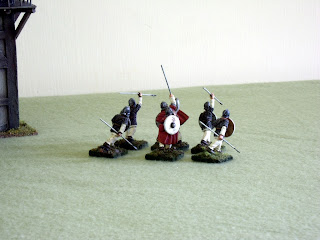 After 'em! They went that way!

Well, on to the next bit - these can't fight off Aelle on their own!