Something A Little More Complicated - A Sub-Roman Church, Part 4

In the case of the roof of the nave, I first made and fitted a ridge for the roof from 4mm dowel. I have no idea how big Roman ridge tiles were, but this scales out to what is currently in use! The ridge had two angled mortices cut into the ends, to rest on the point of the pitched wall. The cut ridge was then dry-fitted, as shown here. 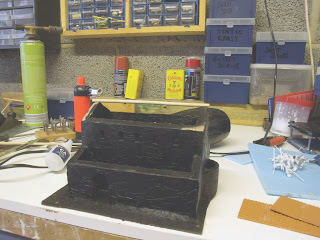 This is NOT a carrying handle!

After this, I glued on two tiled sections, attaching them to the ridge only. You can't see all the blu-tak that supported it during the process! 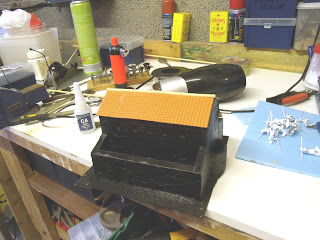 After letting it all dry, I turned it over and closed up the joints. After letting everything dry again, I fitted  internal crossbraces  to help strengthen and locate the main roof section. It has the added effect of looking like there are actual trusses in the roof! And of course, a truss is just the thing you need in your nave! As with any timber roof, there is a certain amount of chaffering and fettling needed to get the bits to fit... 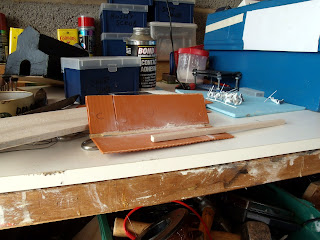 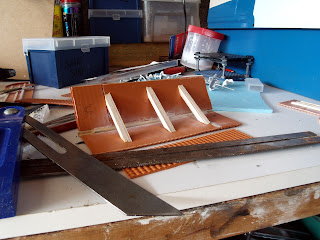 The roof is assembled with horizontal purlings made from thin balsa. These have the effect of reinforcing the butt joints in the plastic sections, and at the same time acting as supports, holding the sections in the correct place, while making them removable. 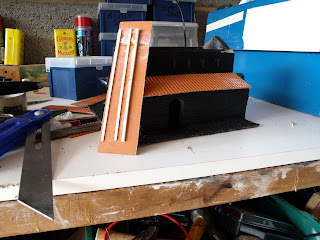 One in place, one for show!

I will confess I had not given enough thought to how to tile a conical roof from flat sheets. When I did, the obvious answer came to me in a flash. "With great difficulty!" Accurate, but very unhelpful. After a LOT of head scratching, I discovered that suitably-sized plastic cones are extremely rare. A few tries with cutting the cone out of plastic sheet was not any more successful. So, I decided there was only one way - the way most of the buildings on here get constructed. Carve it out of a block of foam! 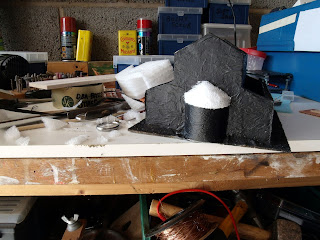 I've got this problem with my apse...

Before going any further, I decided to start painting. I think trying to add details then painting the inside especially might be a recipe for disaster.

After gluing the cone in place and doing a basic paint job in and out, it was a case of cutting and adding strips cut from the Wills sheets.  Lots and lots of little wedges of tiles, all individually cut and fitted, plus a bit at the top to fill in the gap. Ooh, what a pain in the apse! 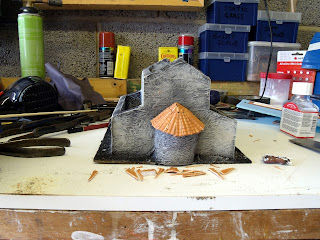 ...But I think it's getting better.