Lady of the Lake

A lady in white will bring sun to the night,
Brighter than ever before.
I know she waits below,
Only to rise on command.
When she comes for me,
She's got my life in her hands,
Lady of the lake


from "Lady of the Lake" by Ronnie James Dio

A slight confession. Long before I was a wargamer, I was a rolegamer. Before I read Osprey titles, Bernard Cornwell novels and the works of Lesley Alcock, my influences were Tolkien, Michael Moorcock, Robert Howard, Ursula LeGuin and Alan Garner. All of this, plus a love of heavy metal mean that fantasy and sword and sorcery run through me like the letters in a stick of rock.

As a result, my take on Arthurian wargaming cannot totally decouple itself from my past (and still ongoing!) love of myth and magic. So here is one of my favourite Arthurian characters, Nimue, the Lady of the Lake. 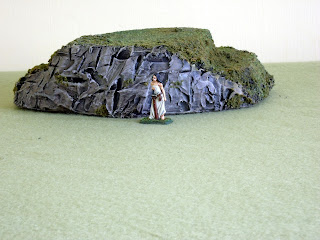 A Lady in white, to bring the sun to the night...

This miniature was originally an elf from Middle Earth, from the Mithril range sculpted by Chris Tubb. I think she provides a suitably otherworldly look for a character who was a fay, magical woman of uncertain background - who may not even have been fully human! The shading on the white fabric was Daler-Rowney Payne's grey acrylic ink, mixed with Future and flow improver, then diluted to give me the depth I wanted. Once it was dried, a quick drybrush with white was all it needed. I'm pleased with how it came out - not as nice as wet blended oils, but better than I can do with layered acrylics on white. 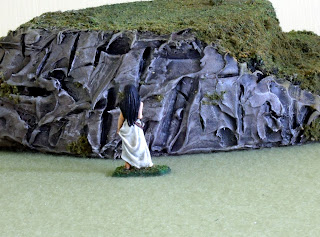 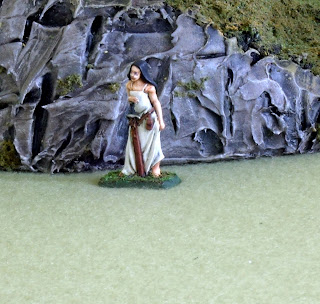 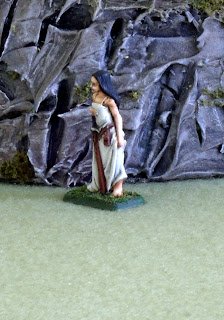 Here's a final one, with Aelle the Saxon warlord, Bedwyr, one of Arthur's nobles, and Drosten, a Pictish lord. Magic, mischief or magnificence - which will follow? 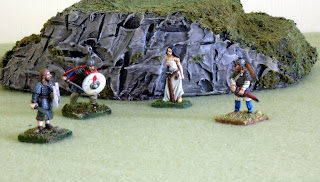 Then a beam in the shade from a slivery blade, has shattered the edge of the night